I would like to request a feature be added. I have sambapos working in kiosk mode using terminal services and thin clients. The problem I have is that when people walk away from the terminal they sometimes forget to log out of samba. So I would like to have a adjustable time based auto logout feature. Also since I am running in kiosk mode the windows explorer.exe shell is not running which means the screen saver cannot start. I would like to request some sort of time based screen saver or even slideshow that can look at a folder of images and just play threw them after a set amount of inactivity has passed. This way I wont have to worry about screen burn in.

Have you seen this feature? 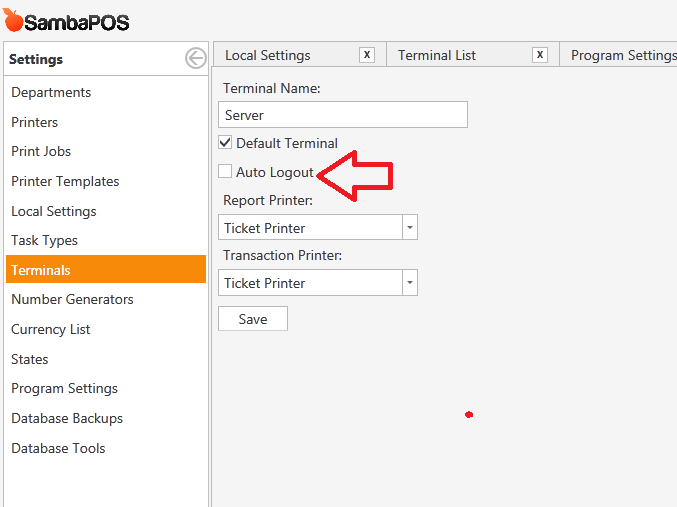 You can use Start Process action to start any process including a slideshow of some kind. You would need to configure your kiosk mode to allow it.

Yes i have but I dont want the terminal to log out after every ticket… so like the register or hostess station will need to stay logged as long as they are using it but if they walk away to go grab something or need to go to the bathroom or whatever i want the system to logout after like 5min of inactivity and then say after 10 start a slideshow of images or something like that… I use the above feature for the kitchen station and it works great!

I realize that… Only thing is that I don’t want to do that. The way that my kiosk mode works is when the thin client turns on it auto logins with a username and password… Then samba starts as the shell program so as soon as samba is closed the thin client logs off. I do not want to setup username and passwords for windows because it will be too many steps for the users. Also when you replace the shell like I am it removes all the windows explorer.exe features so no desktop… No taskbar… No screen saver… So no screen timeouts… We also dont have keyboards setup so the users cannot use features like Ctrl alt Del. Its even disabled for the user through group policy on the domain controller… So if someone decides I’m going to hook a keyboard up… Good luck getting out of samba without the admin pass.

It won’t be full-screen, but close… Could you use the HTML Viewer Widget as a “screensaver”?

This tutorial is for a slightly different purpose (like a Pole Display with Ads), but could server as a similar idea…

@Emre, Is it possible to have another demo printer, but for Internet Explorer, Chrome or FireFox ?

As far as timed auto-logout, I’m not sure. I would guess you need to set up something like:

The “tricky” part would be resetting the Timer to zero each time the user touches something or navigates within the Menu… I don’t know that we have enough events to capture that succesfully?

I’ve added Delaying in Seconds feature to Execute Automation Command action. It might not be a direct solution but can be used for this task.

To be able to implement Auto Logout after X seconds feature we can setup a delayed automation command that logouts user after ticket closed. We should also cancel that when a ticket displayed or application screen changed to a screen other than TicketView.

It will be available on next version.