I have 2 order tag groups for a product called FULL

The first order tag is called FULL BR WITHOUTS which lists all the items within the breakfast.

This is designed so item swaps can be made without charge.

This works well enough. However occasional mistakes happen where users select items from the BR WITHS without selecting a WITHOUT. So extras are not charged for. (We do have a Order Tag for Extras which is chargable)

Is there a way to restrict the selection of BR WITHS against BR WITHOUTS?

This shows that a BR WITH is selected incorrectly, as this should only be used against WITHOUTS: 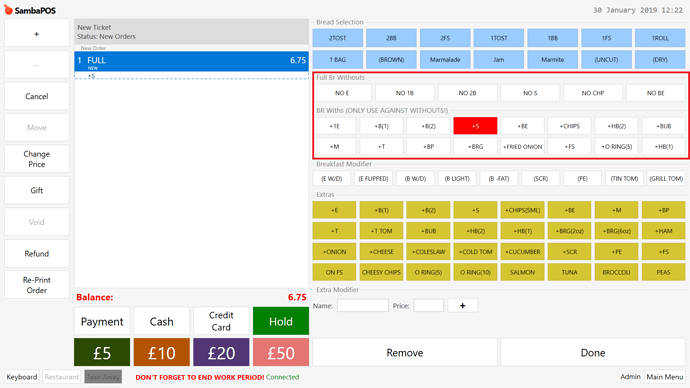 This shows the correct way to select extras: 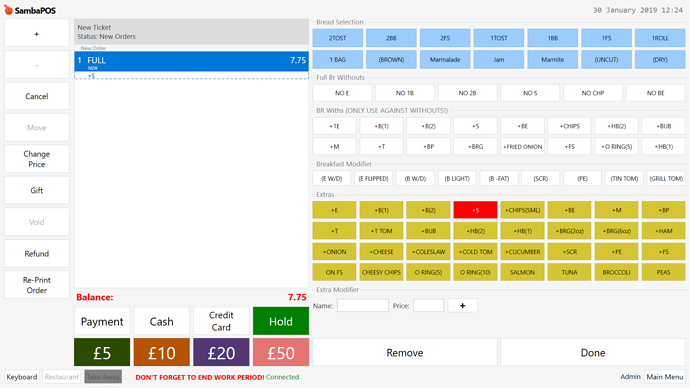 Don’t think this is possible.
Would it be viable to have minus on the without and plus on the with so they cancel out provided equal selected? Would also mean just extras can come from same group.

@JTRTech Thanks for your input. Works pretty well tbh as long as the user knows what they are doing.

If you get new staff, they tend to add extras from this section sometimes when they should be using the Extras order tags. I was just looking at a way to eradicate this if possible.

I do have a warning that pops up everything a BR Withs is selected.

could it be done with setting? or does setting HAVE to have a number in?
create setting swapsies then add
{SETTING:swapsies} to the max amount of with
set an action that adds +1 each time a without is pressed
{SETTING:swapsies} reset at the end of the transaction

No idea if it would work but just an idea?

Maybe @emre can advise if this is possible?

This is not possible but perhaps we can think of a better flow.