Yeh you pretty much answered my question there.

I meant after manually closing a ticket (although its automatic after 30 seconds for me now).

As I understand it this setup will automatically log off a user who after a certain periode of time e.g. 30 seconds created and submited (closed) a ticket. Am I right?

Hard to say what could be wrong. Either there is a typo, or the Ticket isn’t being marked as closed properly.

What version are you running?

I am running the most recent version of SambaPos. I even deleted all changes related to this function and typed them back in. I was testing this function when there was no open ticket and still no logout.

If it does not work for me thats ok. But I would like to know since you are testing a newer version of SambaPos does this version come with an “inactivity time logout function”?

Your doing something wrong. Please post some screenshots so we can help you. If I had a dollar for every time someone came on the forum tried to follow a tutorial and it didnt work and then said “I followed it to the letter” I would be rich. Almost every time it is something they missed while following it to the letter

But I would like to know since you are testing a newer version of SambaPos does this version come with an “inactivity time logout function”?

It does not come with what your asking for. It does however have the same option as v4 to create this yourself just as @QMcKay has demonstrated.

@Aksel, did you add a default mapping (* * * *) to all your Rules? You must do this, otherwise a Rule will never fire.

ahhh that could be it!!! I must have missed the mapping instruction bit so I left them all blank. Thanks for the hint!!! I will try it out latest Monday and let you know

FYI, we rarely mention that Rules should have a mapping - we almost always leave that part out, because it is a “given” or “common knowledge”, and we assume that most users know this is required. From time to time, a new user isn’t aware of this, so it must be re-iterated…

All Rules require a Default Mapping (* * * *). Without a mapping, a Rule is disabled, and won’t do anything.

I would rather it add the mapping automatically by default.

Login and go to the POS/Ticket Screen.
Let it sit there for the timeout value (i.e. 30 seconds).
nothing happens - you are still logged in, because you haven’t > created a Ticket, nor Closed one, which is required by the first solution >

with the line from the first option:

That is exactly what he showed you. And this is a true timer in that regard.

Something else is probably not working can you show some screenshots of your setup maybe we can spot a typo or a mistake.

@aksel, it sounds like you want to use the first posted solution only, and that is fine. Just use what is detailed here:

Even though the Automation Command attempts to fire after X seconds, if there is an open Ticket, the Logout fails. Only 2 Actions and 2 Rules required…

Do not implement the second post additions, detailed here:

Here is a Resetting Timer. In addition to the 2 Actions posted previously, add another one …

EDIT: It seems this was only for V5 a future release. Very sorry for confusion. 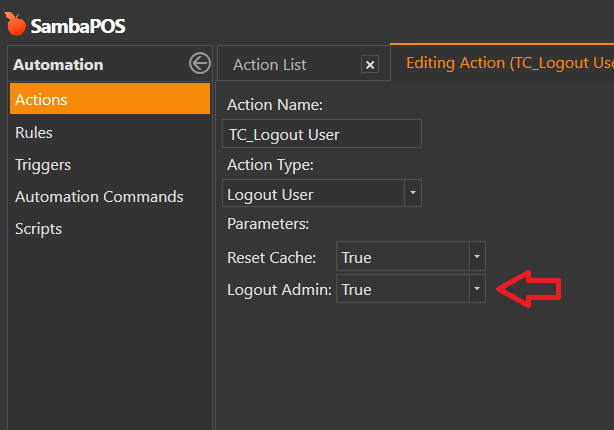 Like i previously said i had this issue when doing 100% staff discount with entity added and then auto logging out and the whole process happening at the same time causing a screen switch issue. I dont use the “built in” auto logout feature and i have manually added logout user action to specific rules where i want log out to occur. With my example above logging out at the same time as adding an entity and applying a discount resulting in the ticket being “paid” caused me an issue and auto logout was the problem, without this everything else worked perfect.

The solution - Auto logout with a delay, like your asking for, i only have this applied to rules where a screen switch was causing me an issue such as when ticket was closing, here is my setup for it

Create another action (if you dont already have it) - "Logout User" 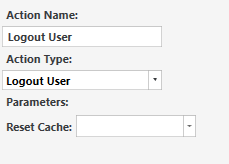 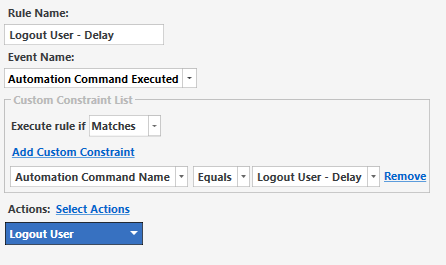 Now for all of the above to work i simply need to add the ACTION “Logout User - Delay” into the rule where i want logout to occur when ticket is closed, in my case it needs to be in my 100% staff discount rule below 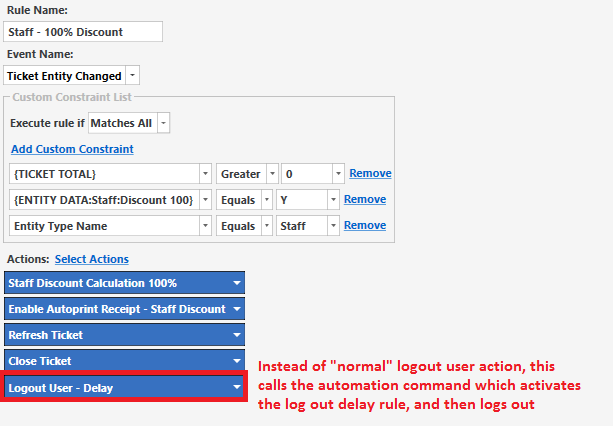 So what you would need to do now is simply put the ACTION “Logout User - Delay” into whatever rules you have where you want the ticket to close and then “wait” before logging out, or apply it to a ticket closing rule, so everytime a ticket closes eg when you go into “tickets” from the main menu and close a ticket not just when a ticket closes at the end of a sale the logout delay kicks in.

Hmm that could be let me check. You are correct so I will change my post for V5 specifically @emre must have snuck that one in on us lol. Sorry for that. I will ensure I test stuff on V4 to ensure consistency when helping forum.

No probs, i like it when you sneak in these little updates here and there haha

@Aksel please scroll above and look where @QMcKay said:

@aksel, it sounds like you want to use the first posted solution only, and that is fine. Just use what is detailed here:

So I needed to change the times because it logs out too quick for me, id like to increase it to 30 seconds on everything except the screen change as it is too fast in-between customers during the day. Id like to make this 120 seconds.

What ill change is:

Modify the Rule AL AutoLogout and add this Constraint to the Action called AL Logout User: