Hi everyone, i had an incidence where i have lost sales transactions that had been keyed in and receipts generated. Anyone with an idea how i can recover them?
Thanks.

Sales typically don’t just go missing. Can you give us more details what happened.

Also can you log into Sambapos then double click the logo in upper left to make it window mode and show us a screenshot of the top title bar?

Hello, am also experiencing the same, the transactions went through at later time they disappear, its then hard to tell items sold. attached is the screenshots… 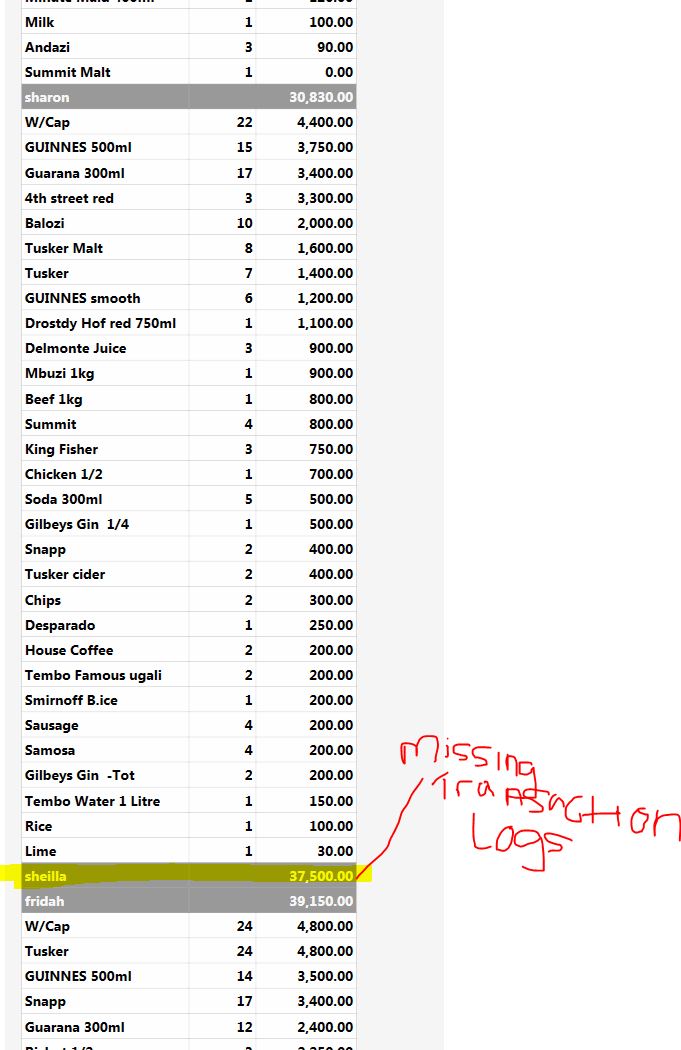 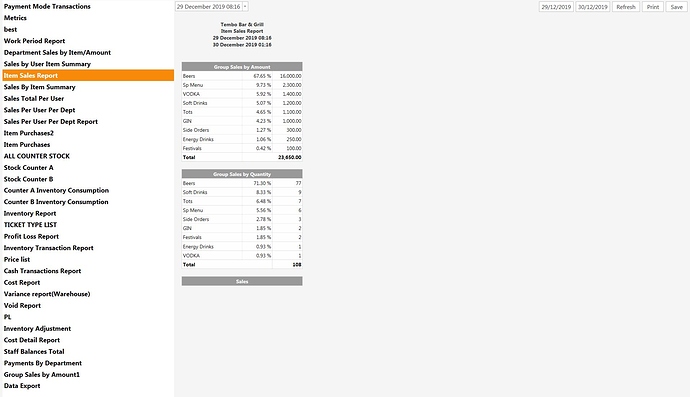 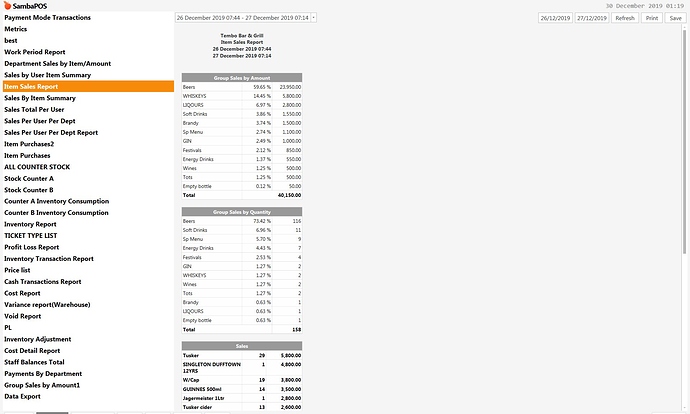 What do you mean at a later time? That’s how a work period works. Of you make sales outside of that work period then they will show up only in the wp they were made in.

Thanks Jesse, I mean later in this manner during the time-frame of wp, at one point the sales transaction is there then later it will disappear during the same work period. the ticket is there and can be cashed out but when you check the list for items sold in the report its not showing for a different user. The whole process moves smoothly the issue is when you want to see the items sold by that user they are not there. With the attached image sharon sold 30830 sheila sold 37500 and fridah 39150 both sharon and fridah have the items sold breakdown but sheilas breakdown is missing, this has happened several times but with different users.

You would have to show your report settings. Probably something’s wrong in your syntax. That doesn’t look like a default report.

Well, it was working fine for about 4 months ago the incident started few days ago. its the same issue similar asked by Easyfind Hi everyone, i had an incidence where i have lost sales transactions that had been keyed in and receipts generated. Anyone with an idea how i can recover them?
Thanks.

From what you have shown it doesnt sugest it’s related.
As jesse said, need to see the report template to understand what is actually being reported.
You obiously have lost transactions as its showing a total figure but cant guess as why you have a total but no breakdown.
At a guess maybe your reporting order totals and ticket totals by order user and ticket user or something like that possibly causing unmatched figures where multiple users edit a single ticket.
But again, it’s hard to understand what your reporting on without seeing the report template.
It may have been fine 4 months ago but perhaps staff have started doing something differently causing unexpected report results. Hard to say without more info.

Hi Moses I realised the problem originates from two scenarios.

Hello Easy Find, Jesse, JTR Tech am grateful for your soonest help. meanwhile we were able to find the cause of the problem on our end. kindly have a look at the attached image, the item named Rice|Ugali + Mbuzi @ 400. We have discovered that any service personal who sells this item mentioned above their wp sales breakdown disappear immediately. Whoever we have renamed the item and we want to do a practical sales post with one of the previously effected person after they have made some sales. we humbly need advice; if its possible and how to rename the items previously entered in the database as sold items so as to have the previous reports complete 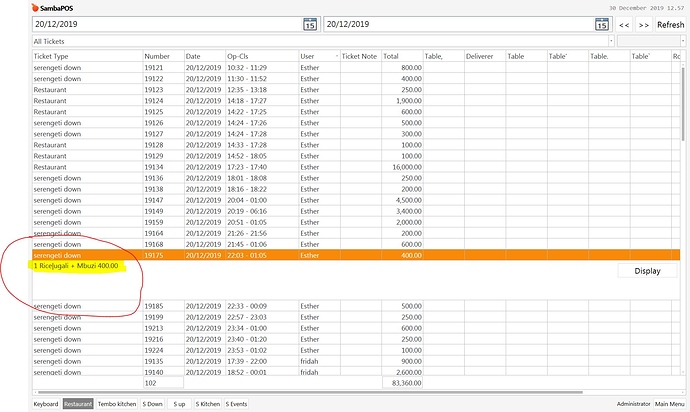 It may be the + being a special character is breaking the report syntax.
Some reports are more problematic for being effected for things like this.
You issue is likely the use of the menu item name group/list in the second @ in order to have menuitem and portion name on split lines.
I abandoned this formatting after similar reporting issue with &/and.
I would reconmend changing report to show menu item and portion in columns/fields instead which would negate the need to mess arround with DB changing order names.

This is my item sales report;

You will see I have ,O.MenuItemName.asc,O.PortionName, keeping name and portion inline negating the need for the @ list for menu item names which is likely causing your report issue.

So as suggested this issue is unrelated to original topic, the transactions are not lost, bad order name is breaking reporting expression resulting in report not rendering correctly.
This type of scenario is unfortunately inevitable with such a customisable system where so much can be customised.

Hi Moses just rename your product and have mbuzi then add a tag for the accompaniment. Am within Nairobi if you continue having a problem I can assist.

Yeah but I managed to resolve the issue it was entirely to do with disk space and low Memory. Thanks for your assistance.

I find it hard to beleive low disc space or memory would result in random tickets being lost completely, of that were the case I would expect error messages relating to samba and the database connection.

It wasn’t an issue with random loss in tickets but entire set of wp. Anyway all that was resolved and all is well.

It would be good if you can explain what happened and how you fixed it so many other members of the community can see.

Thanks all, I was able to find out the mssql seems resulting back on reports this ( | ) so i did rice|soda is wrong…the better options is rice+soda, rice or soda. That is all, thanks.

Pipe is a special character and should generally be avoided in general use.