Hi I am a new user.
While doing some experiments I have lost my settle button.
Can some body help me

Actually this may not work. Instead did you rename the automation command?

Open that Automation Command if you do not have one make it. Then go to Mappings and be sure the following Mapping is made.

thanks.
But what about the rest of actions.
Also explain that also.
The button has appeared and it shows the amount to be charged
But nothing is happenning
Like
printing the bill and kitchen item ticket

You basically killed an integral part of the system. What were you doing? Did you also delete or change the Rule that handles Settle Automation command? Look under Rules and Automation Command Executed. Look for the Settle Ticket rule.

You probably started renaming things and did not realize it has to be renamed everywhere else too.

what i was doing was something with open drawer script. It rewritten my printer templets etc.
and after that screen changed.
Although the rules are there for settle.
the rule for Settle is there which says display payment screen
Repaired the printer templet also.
But now settle button is not showing cash button i think and the payment method buttons

So you renamed or deleted Tickets > Payment Types also? Screenshots would help if you need forum permission to post images let me know I can give it to you.

no…
payment types are there
Cash
credit card
etc are there

What about the Mappings for those? did you change anything in Accounts or Account Transaction Type?

Did you try to define a currency? 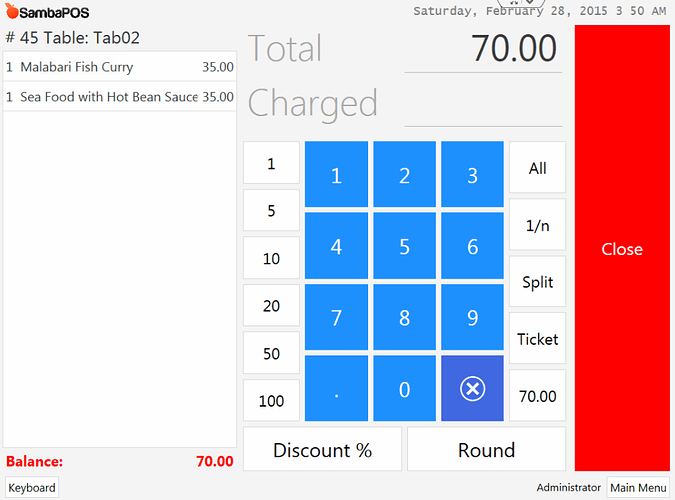 Here it is the setle button screen

Ok go to Payment Types and click on Cash and take a screenshot of General Settings. 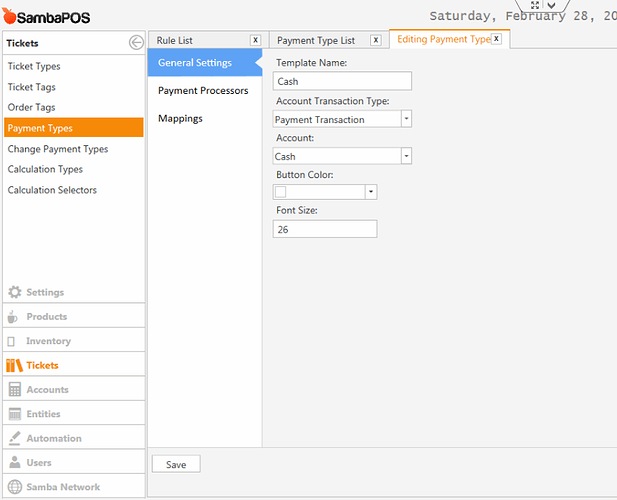 Here it is
and Maaping screen shot

So you changed Ticket Type. Do you have more than 1 ticket type? Or did you just rename Ticket?

Tickets which were opened are still not being closed.
They are open.
All I was doing was to integrate the cash register.
Reading one tutorial and then updated or rewrite some thing

only one ticket type

Those Payment Types you have Ticket Type 02 Bar Ticket… but for Department what do you have set as default ticket type?

All I was doing was to integrate the cash register.Reading one tutorial and then updated or rewrite some thing

Yes I understand however I have no clue what you have done, what tutorials you were following, or what changes you made. I can only guess based on what you tell me. It sounds like you did something with Ticket Type.

ok now i think it is done as order has been closed.

You should have the payment types listed when you press settle button. The fact that they are not shown there means you may have mapped it wrong, changed accounting, tried to define a currency, or just plain deleted it. Since you showed me that you did not delete them and they seem to be setup correctly with correct accounting etc. Then the only other thing that is not default is Ticket Type mapping.

Work flow is what you want it to be. But the default work flow is Accept order, enter to pos, take payment if full payment ticket is marked as closed and it closes ticket.