When you map an Automation Command to an Account Screen, the Account Id is automatically passed in [:CommandValue].

OK so I not trying o map it to a screen, just trying to create two Account Transactions in my Rule Flow. I guess this option may not work as emre showed in the link above whereby I wish to use the document to create a Sales Transaction (Samba Default) and a Points Transaction (hybrid Discount)?

#And the answer is… 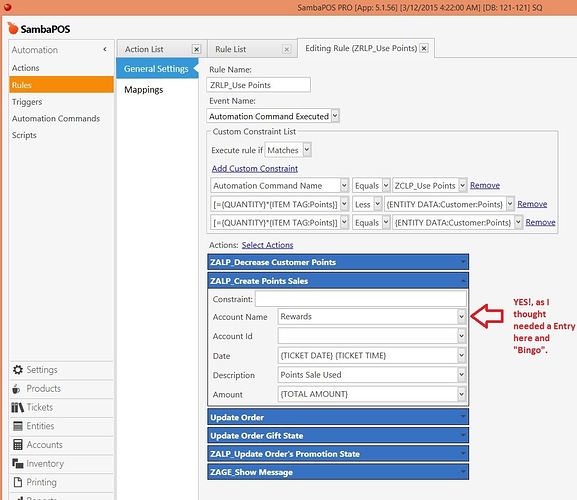 Just inexperienced and had no idea! Anyway not sure if hardcoding the name is a good thing?

@emre the only thing I not happy about is: 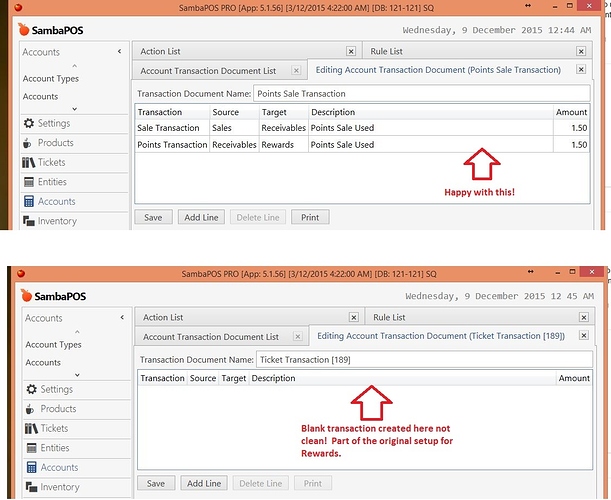 Look forward to your comments.
[EDIT2]
Next is convert Points to Cash

Ok I really do not wish to move on until I fully understand this Account Transaction Document? I see it used mostly to add to Entity and Account Screens but why do I need to use it here…
Also not sure if I am comfortable that I reference the new Account “Rewards” but the Sales Transaction [Default] writes to 2 other completely difference accounts?

Just trying to be complete and add to the Samba documentation as guesswork is slightly frustrating. Oh there is only 1 reference to this document type in the “Gift Cards Tutorial” and no WIKI details - its the one left blank.

This will be my first tutorial so if you see any mistakes, formatting or ideas to improve it let me know. My ultimate goal with Accounting is to integrate a full accounting system into SambaPOS so I can virtually all of my business from one system. This tutorial will cover one aspect of how I am building my Accounting and it was based heavily on ideas I got from the tutorial “Expenses and Payouts - Method Q” from QMcKay. I will start the tutorial and build it over next few days there is a lot…

Here is a quick tutorial continuation for a method of accounting. This method works best to track money taken from the cash drawer nightly to be deposited to the bank. The picture below shows a deposit of 100% of the drawer you can however leave money in the drawer and it will show in the cash Balance. Can also setup Credit account to deposit as well however I would advise doing the deposit only after you know how much the credit processor actually deposited. I will explain in a later tutorial…

Originally derived from the v3 Tutorial here: http://sambapos.org/wiki/doku.php/en/configuring_cash_transactions_for_v2_users Understanding the operational flow of Transaction Types and Document Types from the Tutorial above, I implemented the following method to handle Payouts to Expenses and Suppliers that come out of the Cash Drawer (Payment Account Type), and an Account that I call Wallet (Bank Account Type). This screenshot shows the Operational Flow of making a Payment to an Expense A…

I don’t understand what you are saying here? Can you show a example?

I will study those tutorials, would of searched “Account Transaction Document” and looked for applkications.

@pauln I understand your trying to learn Accounting… but what actual real situation are you trying to solve. I mean what are you wanting to do and why? Its easier to answer those type questions vs trying to answer questions about features.

I don’t understand what you are saying here? Can you show a example?

Sure - during training last week I demonstrated the use of “Rewards Points” - Customer Earns Points when they make purchases, Customer can use Points for a free Item.

The first question was nice, so show me the report on the value we have given away? So I set out to record transactions…

Been there many times, see reference to blank record above, but inside ticket means what? If you said inside a Rule - well know what that means.

I would have just used reports to build them the report. Those transactions are already recorded in each ticket.

Those transactions are already recorded in each ticket.

No actually - I followed emre’s (old) tutorial and the automation command leave a blank transaction? Hence why I am here…

I dont understand what blank transaction means because your showing a transaction and its not blank.

I will repost the shot but it is above…

The first transaction shot above is from my call to the Points Sales Transaction Document I created. I fi take this out as it was an add-in it leaves the Flow close to original tutorial. The only mod was a calculation on Points…

OK so its going to be hard to see what your doing here. Why do you feel you need to rework accounting just to give them a report on points? The original tutorial had correct accounting and it was fully capable of being reported on with custom reports.

Yes sure - well if I have blank transactions as a result of when they use their points to get a free product - would there be nothing to print? I should mention nothing is shown on Work Period Report - very first place I checked.

It was not creating a blank transaction until you tried to rework the accounting.

I should mention nothing is shown on Work Period Report - very first place I checked.

We can modify it to show it. Work Period report by default is not setup for Points system.

It was always creating one - but let me check again. Ok see you post above, that was what I was to try today. The WP at the moment does show States of “Promotion”. Obviously been trying everything last night to get the Document to create 2 transactions so will need to reset back to basics. I would like to do this to see if a blank Transaction is created as it a rule must just reset “Value” to Zero and therefore when Samba closed the ticket is creates a blank.