We would like to carry out a fairly major menu upgrade on October 1st comprising price changes and new items added. There are already nearly 500 items on the menu so the prospect of changing them one at a time on a live system is a bit daunting as well as somewhat impractical Ideally, I would like to create & test the new menu offline before going live but I cannot see any way of doing that easily.

Can anybody offer any ideas?

Since you cannot ‘export’ the menu as far as I’m aware the only way to do what your saying is via backup/restore. However this would mean that data from time you take a backup home to restoring the updated would be overridden when you restore the copy you took home which isn’t ideal.

Using the bulk product creation you could build a list of the products to be added and add in one sweep - however this doesn’t support multiple portions if you use allot of portion options.

Even with allot of products if you begin prepared with a clear idea of what your wanting to end up with it shouldn’t take too long.
Biggest issue I have when doing clients menus is the NEVER give you the full menu and always end up calling saying you missed this - I didn’t miss it, it wasn’t on your list LOL

Thanks for the reply.

THe backup / restore option is not going to work as I need to keep the transaction data.

When I set up the original system I used the bulk product creation and i have to admit I had forgotten about that option. Off the top of my head though I don’t think it will work as we need to keep the MenuItemsId and MenuPortionId the same as they are now.

Your right the backup/restore is not an ideal solution.

This is a good question which would be handy to do, that is to be able to export product/menu and import similarly to what you can do with rules etc in the database tools. To allow a large menu update like this to be prepared offsite and loaded quickly in one go.

A quick search has shon a solution using SQL itself but not sure how comfirtable you might be with using that?

I was using SQL Express 2014 and Microsoft SQL Server Management Studio 2014 for this. I will show you how to use Microsoft SQL Server Management Studio to Export your Menu and Products into a SQL Script so you can use Database Tools to import your entire Menu if you ever need to rebuild your database for some reason or you want to use a non production computer to build a menu and then import it to your production system. For whatever reason this may be useful to you here is a simp…

interestingly, I tried a version of this already but I didn’t edit the file and to re-import it I used Server Management Studio and it failed (can’t remember why offhand but i seem to remember it had something to do with syntax error before GO). I will give this a go and report back.

Obviously dont import straight in to the live database

Well, that is definitely on the right track but gives the following error 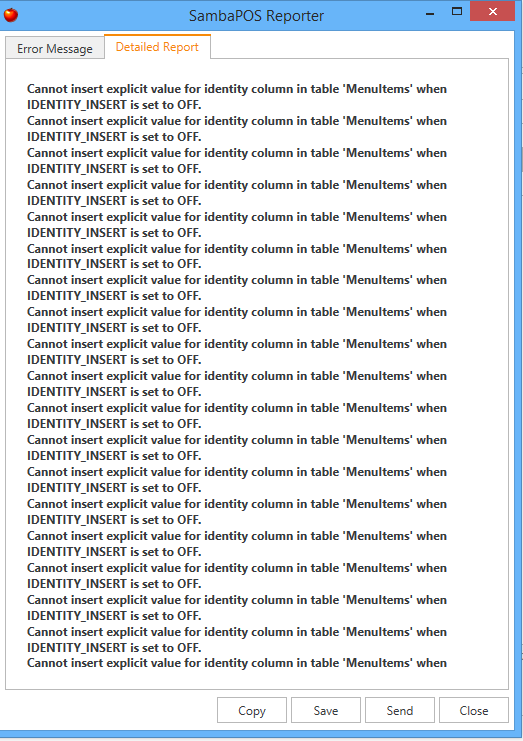 Dont ask me, am far from a buff on SQL, only real direct SQL bits ive done is monitoring program setting values while crating new configs.

OK, success. Turns out the file already contains the SET IDENTITY_INSERT MenuItems ON and OFF commands as well as similar for the other tables. However, if I import it using SQL Server Management Studio it all seems to work fine

There is no need to modify the file as outlined by @Jesse if you import it via Management Studio. Not sure why that didn’t work for me yesterday, guess I made a mistake and ended up wasting a lot of time lol.

Anyway at the end quite straightforward. Thanks for your assistance.