This may be something in the works already if so I apologize but it would be huge if we had something to compliment the custom reports module that could be purchased as an optional add on.

An internet connected Operations KPI Dashboard that would be built to be displayed on the web. Ideally the user would decide if he opens it up to the actual web or keeps it intranet only. Or maybe a set of template designs that we can plug data into.

PS: I know technically a savy person could code this and hook it to the SQL but… some metrics would be missing like accurate inventory tracking and some of the stuff that is calculated real time and not stored.

Thought I would add the point that many business owners (Although it would pay off it they did learn it) are not experts in the field of Operations and how to interpret KPI data. Having something easy, pre-made, with typical metrics to choose from would be huge. You could allow more advanced stuff for the more experienced operations experts.

@emre I know you briefly hinted at something similar in a previous conversation. So I apologize if I am doing a request like this prematurely. I am heavily rooted in operations and even for a small business I operate off KPI metrics and would love to see this.

I’m bumping it with the expectation of more comments on this topic.

Simple term for what I was requesting would be online reporting capability with template support but it would be focused more on planning not just reporting numbers.

To be honest I am kind of surprised more people have not commented on this. It seems like it would almost be a critical feature for me. Having a central place with operational data and a way to interact with it not just view it for forecasting is critical to how I run my business.

Everyone does it…whether you realize it or not… but placing it into a dashboard and automating it adds so much time saving and really can cut costs in a business even small or large.

Maybe the entire concept of operating within KPI metrics is still just catching on. I first experienced it with Walmart, they started shifting to this about 6-7 years ago . Walmarts system is obviously infinitely complex and custom tailored but it works really well.

As I am a self made restaurant owner, I do not know much about metrics, but as a tec guy would really be interested in testing and trying to mix it in my place… but again, Ido not have the first clue on what in hell you both are talking about… seems to me like Dr. Winter and Dr. Oppenheimer… LOL!!!

KPI = key performance indicator I could explain it but there are numerous other resources that explain it better So i will link one for you. KPI Metrics = measurable data that you can set KPI goals for. Basically it reduces the guess work and gives you more solid foundation to run a business. It goes along with the theory that EVERYTHING can be planned for even unexplained events.

This would give you a quick view of KPI and how its setup.
http://www.ehow.com/how_7291887_define-kpi-metrics.html

This is a more advanced explanation:
http://www.dashboardinsight.com/articles/digital-dashboards/fundamentals/key-performance-indicators-and-metrics--choosing-the-right-data-to-display.aspx

Keep in mind that resources on KPI and Metrics, scorecards etc… typically are using large corporations as examples so the language will be very technical not something you hear in small businesses…however KPI metrics can be used from small to large and benefits from using it are the same. 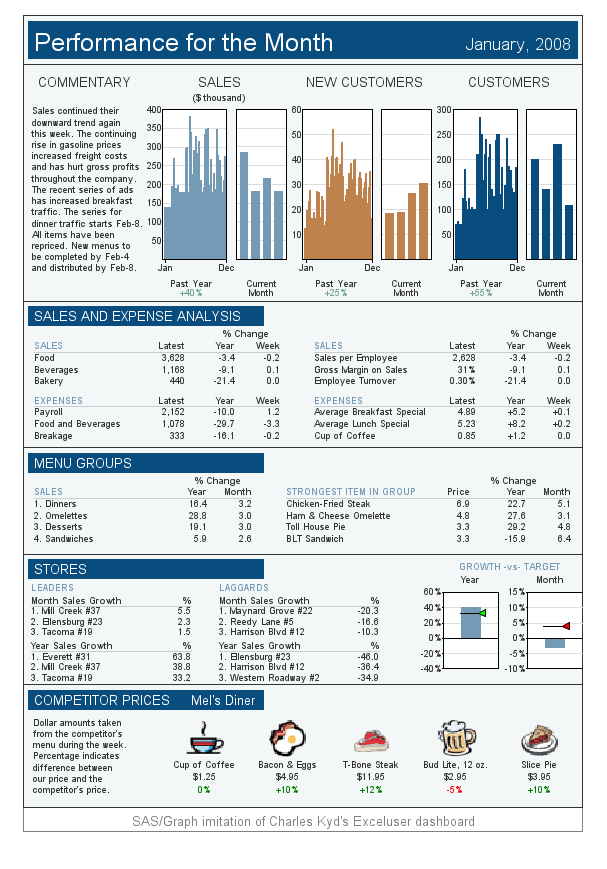 A great example of a simple metric would be schedule forecasting… you can use metrics to build EXTREMELY accurate scheduling. It can use measurable results like customer traffic, purchases, time of day specific purchases are made on average, and other various metrics. It would take this data and can forecast prime hours for scheduling. Your chances of over scheduling or under scheduling would be dramatically reduced… you could shift your payroll from having someone there on a guess or gamble… to having them there for a planned data driven purpose with a measurable error % rate.

Obviously you would want a metric like this to consider an average… I would probably drop it back to a rolling 5week average… The longer it runs the more accurate it gets… 4 years of metric data would be WAY more accurate than just 1 year… and so on.

This is just an example and I do not know if it would work with samba… or not… but I thought I would throw out a good example.

BTW: You may have seen me post it… but I was a store manager for Walmart for years so that is why I gravitate towards this process. However I think it would benefit a lot more people if they understood and could use this tool as well.

Bumping this again for exposure hopefully more input on it.

Dear @Emre and @Jesse, can we start a sub samba project for this?

What do you mean Sub Samba?

That is what the request was for

ok… hands on… lets do it

From what I gathered from past remarks that @emre has made… it is something he is planning to work on. I think he is fishing for input etc to see exactly how people would use it. I am attempting to bring awareness for this project. There are a lot of people I KNOW could use this and would if they knew what it was and what it did.

If I knew C# and .net programming I would attempt to code it myself… but I dont

Maybe we should discuss some solutions to restaurant issues.

In my experience most promotions decreases x sales while increasing y sales. For example people may change their mind from eating food to drink more beer + potato… What techniques are you using to understand how promotions changes your business?

Good idea @emre I see where you are going here. I should be contributing to this as well.

Warning I am experienced user of KPI metrics so most of my answers will involve a process along those lines but I will try to use more common analogies best I can.

To answer your scenario first to determine how it changes my business I would need to understand the goal of the promotion. Was it to increase sales volume temporarily to gain market share % on your competition or maybe it was to shift your customers view on products and to introduce a new product.

I would make sure I tracked sales of that product before, during, and after the promotion, I would track all of my other sales as well and I would not change or do anything to impact my usual flow other than the promotion. I would compare my data of current to past and compare the after promotion data.

If I was running the promotion to try and increase market share %(Take customers from competition) and my average was 5% before and 6% after the promotion then that could indicate success, but if the costs of the promotion exceed my budget then it would be a mixed result.

All of this data I would review on a quarterly/yearly basis and adjust promotion planning according to effectiveness/expenses. I could also use the data to plan other aspects of my business to align various goals I may have. For example: If the Promotions were having a positive impact on market share I could use all of the data I just mentioned to plan and fund other aspects of the business. Example Payroll… so Now I know that my market share% is increasing with the promotion maybe I should look at how staffing affects it.

I would compare the average hours worked for each employee before and during the promotion. I would then break sales down to each individual server based on the hours they typically work. I would use that data to find opportunity spots for hiring another employee and increase potential sales through faster service.

That last paragraph was a VERY short summary of the process the real process would involve several metrics I have in place to systematically track these areas of opportunity.

@neko comparing avg of the campaign period with past data is a great idea.

Which campaign will perform better?

Experienced people can predict something for that but wise people will test both for specific periods and compare their goals. We mean to create tools for such analysis but this is not only related with promotions. Promotion is one of the decisions that changes “something” in our business. We mean to track these changes and generate some performance data to evaluate our decisions.

@gerlandog the work you are doing with custom reports follows KPI process of thinking. You would benefit a lot from this sort of module you just do not realize it yet

I have a feeling Custom Reports may tie into a KPI module eventually. They are kind of like peanut butter and jelly.