It would be useful of we can map menus to specific users or terminals.

My POS till has a massive 21.5" Touch Screen and Waiters are using a IPAD Mini tablet. I have duplicated my menu and made the category and sub category buttons smaller in order to avoid scroll bars on the tablet. I then created duplicate departments pointing to the Tablet Menu and then within user roles restricting the Tablet Users to their specific departments.

This works very well but can be simplified with menu mapping maybe?

In ticket types (I think) you can map different menus to terminals.

Just tried this and it didn’t seem to work.

It should work. Did you assigned a specific terminal from local settings?

yes I did assign a specific terminals from local settings but no luck. 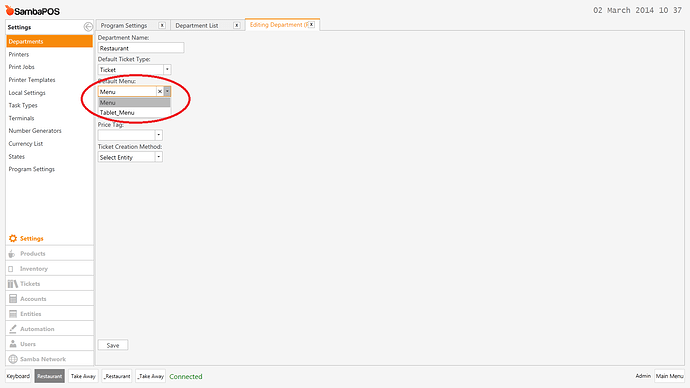 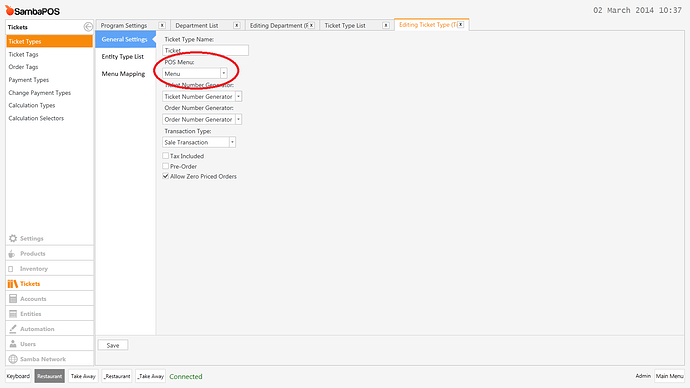 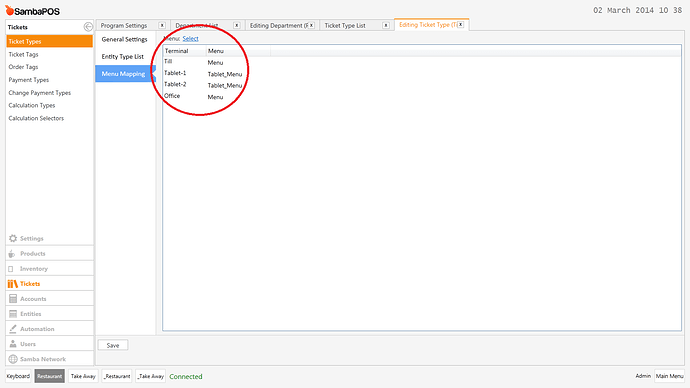 I think I will just stick to my original method which works fine for now. 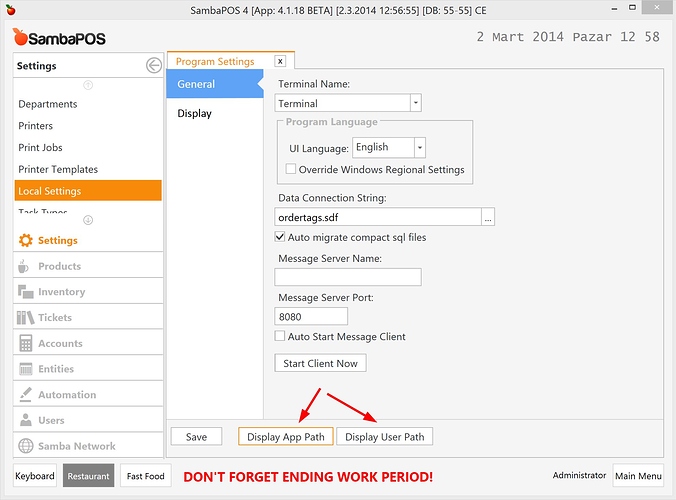 When you copy settings.txt file from App path to User Path, SambaPOS starts used windows user account based settings. Since you’ll have different user accounts for all tablet users, they’ll start using their own terminal configuration.

Your method also works and might be easier to manage for simple cases.

I just tested the menu mapping and I have issues too.
You can only set Terminal based mapping if the Department has no default menu and the ticket type has no menu.

@emre if you set Ticket Type Menu, Terminal based menu is disabled

I’ve created a menu named Terminal menu and left a single category in it. 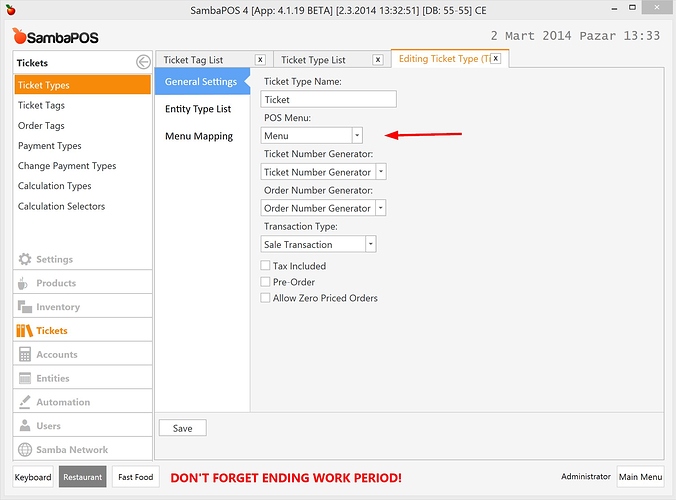 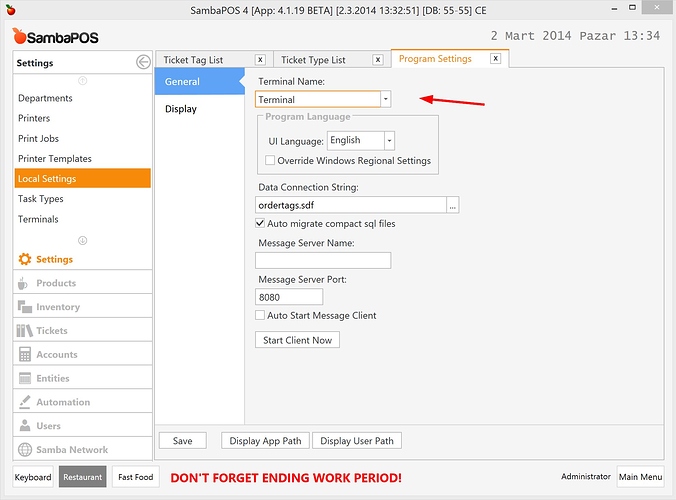 … and mapped terminal menu to terminal. 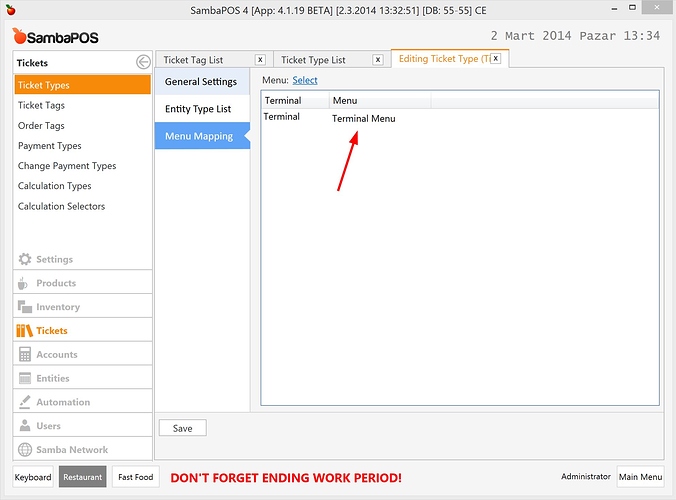 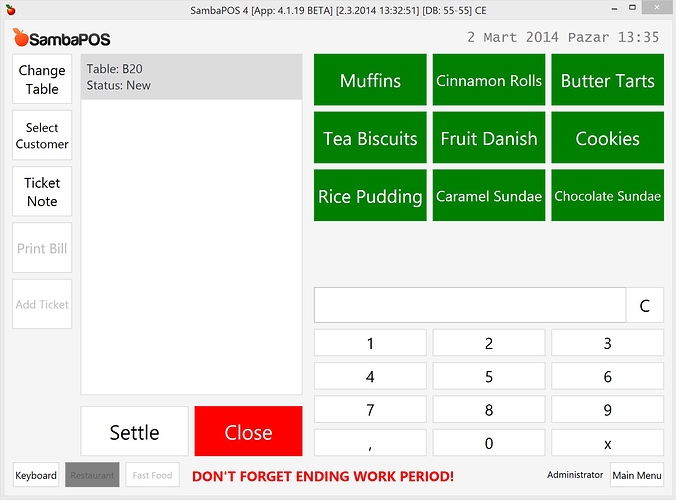 Also we need to talk about a overlooked feature.

We also have Application Started rule to pass command line parameters to SambaPOS. So we can start SambaPOS with a Command Line parameter to change Current Terminal setting.

@emre, I have setup the same as you.
When you go into POS, it shows all the Categories. When you select an item, the Menu then updates to what it should be (the new smaller menu).
If you close the ticket, the new reverts back to the full menu.

I’ve got it. You are working on a fast food department… It will work as expected on next release.

Thank you very much for helping me to understand the issue.

Okay, once I cleared the Menu selection in the Departments I can now do the menu mapping which I tested and came across the same problem that @JohnS found v4.1.19.

Now that 4.1.20 has fixed this small bug, I can confirm it works great.

Thumbs Up @emre and @Johns