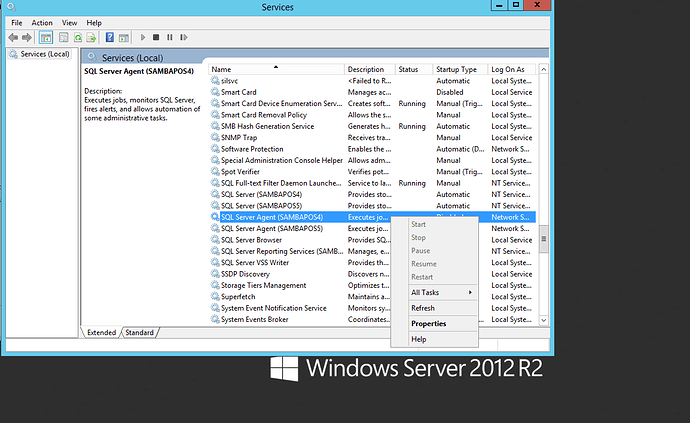 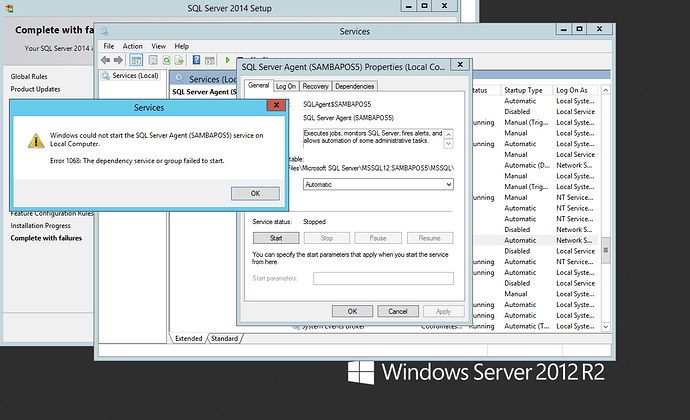 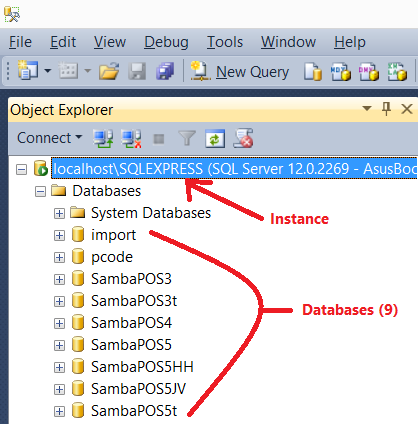 Great point QMcKay you said what I failed too. I recommended only using one instance but failed to mention not to install the other instance. You should uninstall the entire thing and reinstall with a single instance get it working and then follow the tutorial Q mentioned above. 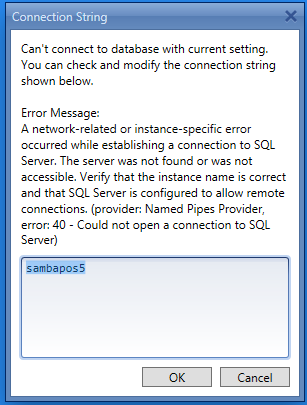 Even before SambaPOS 5 came out, I had only ONE SQL server, “sambapos4” and it would still give me the same problems.

That is not a valid connection string.
Shoudl look allong the lines of Data Source=SERVER\INSTANCE; Database=DATABASE with User Id and Password is using SQL Auth rather than windows
Server = Computer Name (if local can use localhost)
Instance = looking at your screenshots either SAMBAPOS4 or SAMBAPOS5
Database = well whatever your database is called
Will find example/tutorial…

Did you successfully install SQL Express yet? If so, what is the Instance Name?

In SambaPOS, set your connection to use this for a start:

localhost refers to your computer. This could also be 127.0.0.1 or YourComputerName or the actual IP Address of your computer. For simplicity, on your Server, you should be able to use just localhost

So how do I edit the connection string? I can’t even boot up SambaPOS 5. It won’t let me get past that error message.

just type it into the box that appears and restart samba

Ok so I typed into the box:
Data Source=localhost\sambapos5; Database=sambapos5

I didn’t put a username/pass because I used Windows authentication and now SambaPOS 5 is stuck on the blue loading screen.

It should display an error message. Use Alt + Tab key configuration to see if any error message displayed behind other windows.

Yes I just saw that error message. I started SambaPOS 5 again and put “Data Source=localhost\sambapos5; Database=sambapos5” into the text field, but I don’t think it’s going to work.

I think I still need to fix the SQL server installation.

edit: I am currently uninstalling the SQL servers and will name them the default “SQLEXPRESS” name.

To ensure if you can successfully connect sql server or not please review documentation @JTRTech suggested. I’m pasting link here once more.

You can enter an empty space character in error dialog to force sambapos connecting to local sql database instance.

Hmm I just found this from googling. Apparantly, you can’t install an SQL server over an RDP connection, which is what I have been doing the past few times. I’ll have to go over and install it locally later tonight. Then I should be able to connect SambaPOS 5 to the correct SQL server.

I cannot get SQL Server 2012 to install the database engine

LOL, I came across that topic as well when searching. I just assumed you were local to the machine, so I didn’t bother mentioning it.

Yes, Microsoft states that installation will fail using RDP. You could use Teamviewer instead.

How do I make SambaPOS 5 not look for an SQL server on boot up?

Why would you want to do that? Can you explain the need we may be able to offer alternative that solves your real problem.

I tried to install the SQL server locally but it still did not fix the problem.

Edit: now when I try to run SambaPOS 4, I get an error that says "The database file may be corrupted. Run the repair utility to check the database file. *