Just managed to get the mobile client going,

After a full shift we managed to find a small issue. We have a ticket tag that asks how many customers at the table. If we enter a bill on either the server or the tablet and then adjust the bill on the other we create a situation where the number of customers can be entered twice. This doesn’t update the previous figure instead we see two notes on the bill. When we then settle the bill it causes an exception. Now we are stuck with a bill that can’t be settled and so we can’t close the work period.

Also is it possible to settle bills on the mobile client? 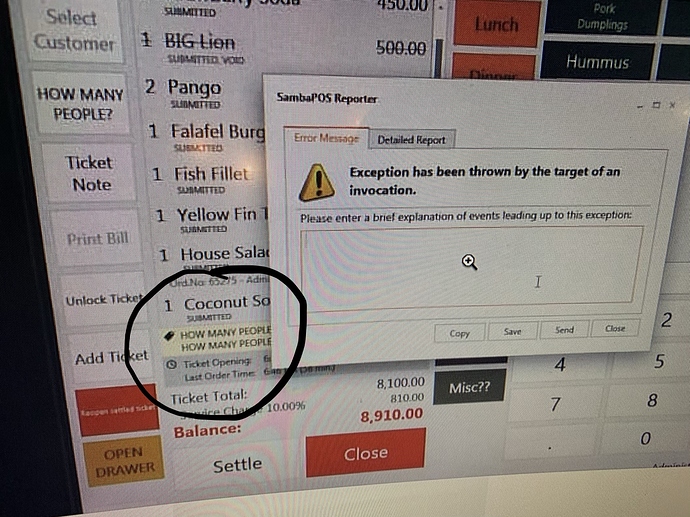 As far as that tag goes guessing you get the error on ticket open.
Removing the tag in database would work but unless your familier with SQL potentially risky if you do wrong thing.

THe reason your seeing two notes is probably because of the actions your using to set that tag. You can reconfigure it so it updates the current tag already set. How do you have that tag setup?

If I go onto my order tag ‘how many people’ multiple times from the same place (pc or tablet) it just updates it. I only get the double tag if I set it from both places. The issue I have now is we can’t complete the day as this bill is still unsettled. Any idea how to clear it in the meantime (tag issue I can sort later) thanks

previous figure instead we see two notes on the bill.

Yes there is a bug in MobileClient. If you select a tag from Mobile and after opening that ticket in SambaPOS it create same two ticket tag in ticket.
If you send me an AnyDesk connection via DM we will connect and solve this issue.

Hi, thanks for the offer to remote in, i managed to clear the ticket by simply voiding all the items and then re-entering. seemed to do the trick so we could close the work period. for now i have removed the ticket tag, and ill re look at this when we do our next systems update. cheers guys