You can get a good network printer for less than that. I bought mine for $89

Ok I’ll have a look and thanks again!

One last question I swear… Is there a way to tag the ticket to my Server Entity when user opens the table?

If the mobile client uses the same workflow as the terminal its connected to, shouldn’t it automatically link the user to their “Server Entity”?

I dont think mobile app follows all custom automation that would usually get triggered on events.

Is it something I can fix with automation?

I am yet to test latest version, original version was limited on the custom automation of which our setup has extensive complex automatons. Not sure how much this has changed with new versions, we opted for the full app method via rdp on ipads.

It follows the rule flow as normal tickets.

Oh well, glad I found this out before I invested in the printer! Lol

Kendash implies it should work.
I did say I hadnt used since early versions and may have changed.

What do you mean add to table? If you want the name to show on table on table screen that won’t work. It will add it to Ticket though if you setup that automation.

The entity screens are not the same. Any custom views on your sambapos entity screen will not show on mobile one. Mobile one will only show entity name.

Ok so I think your terms are wrong. You can’t add a server to a table. You can add them to a ticket. Can you please explain your automation. Show what you have done. Rules etc

I’m trying to figure out how to transfer a table to a different waiter. I run a pub and quite often at 5pm when the day staff leave and the night staff start there are numerous open tables. Is there a way to transfer without ending and starting a new work period?

So when you create a ticket and submit it… when you go back to that ticket is the waiter name not assigned? Remember it wont show on the table… it will be on the ticket.

It does not. I’ll send screenshots of my automation as soon as I can

You may have to change it slightly. The gql may not support CURRENTUSER

Here are my actions and rule… 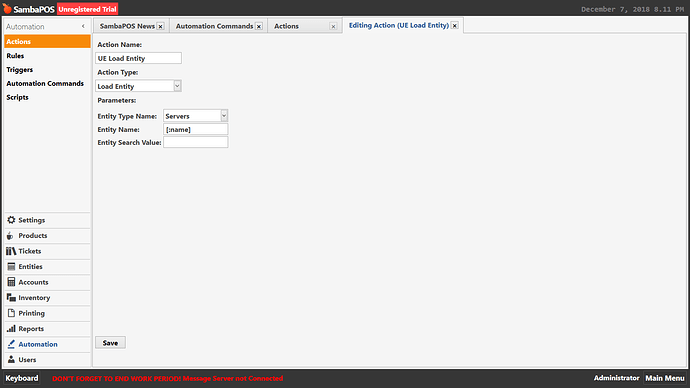 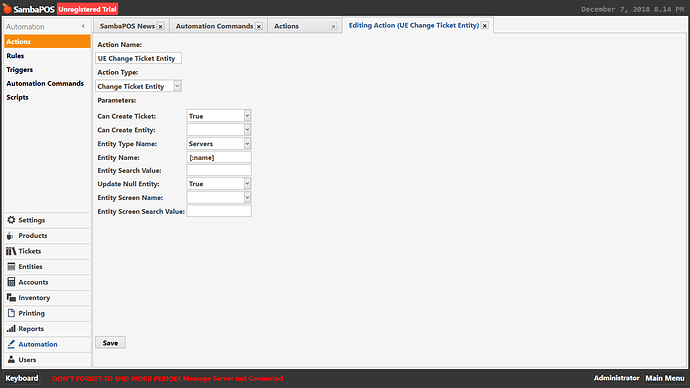 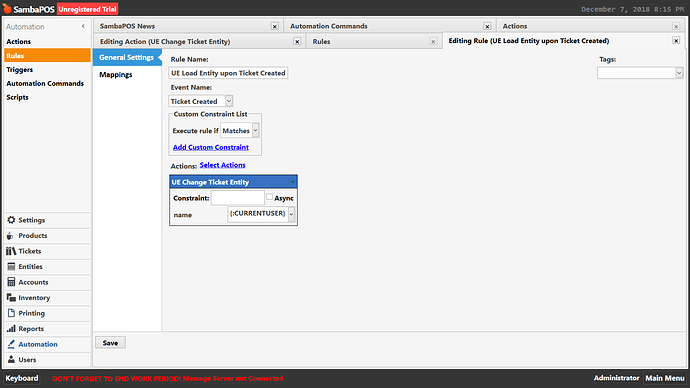 How can I modify CURRENTUSER?

Could it be that I need an action and rule to load the entity on user login?