I added 2 caller id generic devices , bt samba got stopped.
When I connected only one, its working well,.
But ,when I added one more, and generic modem on sambapos with different port number. I couldn’t save, samba got stoped

Why two? Can you take and ring in two tickets at same time on one machine?

I could be wrong but I do not think it supports two at same time.

Because I have two phone line, customers will both lines.
But when I tried with samba4 and windows 8.1, everything working fine…
But on samba5 , not working…

Can you help us to understand what do you mean by “not working”. Did SambaPOS just froze without an error message? What happened when you restarted? Did second device removed from the list? Is it possible to add screen shots of your configurations? Are you using 5.1.62?

PS: I don’t have 2 modems but I can create and save 2 generic modems without errors. (other than port warnings).

Samba got hanged without any message, also I couldnt end the app in the task manager

When I removed one of the device, samba started working…

I know you have 2 lines but isn’t it better to put 1 on another machine so, it can take order at the same time.

@emre I think this is similar problem I had when I upgrade to 62 and it has built in File Monitor. So, Samba Hangs when I have 2 File Monitor running in the same machine.

Having multiple caller id device on multiple machines and broadcasting the incoming number was discussed a while ago if your phones are on a ring group rather than line to seperate phones by each till so incoming calls popup on both machines.

@sukasem can you help me to reproduce this? 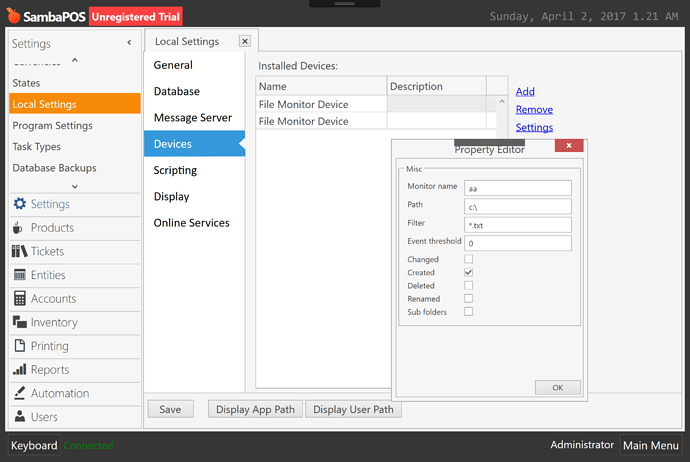 … but it does not hang and seems working fine for me. 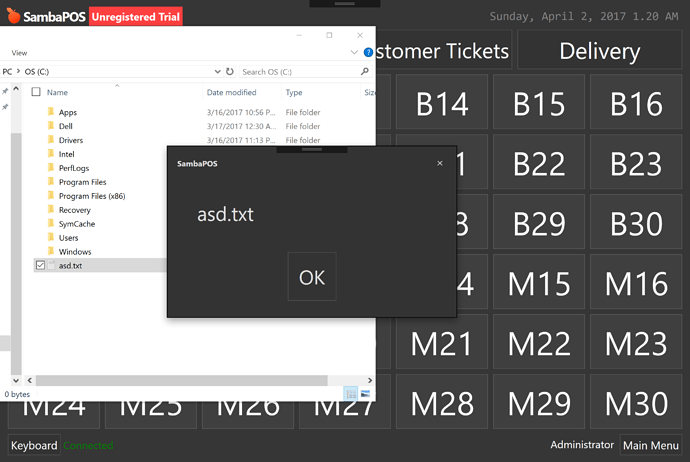 It hang when event trigger not when creating (I didn’t create it lol). I will try to reproduce it later tomorrow.

I tried with Windows 8.1.
I added two generic modem with different port.
But when I click save samba got hanged. I tried o stop using task manager .but couldn’t. Then restarted the system . Then I tried to open sambapos but it didn’t open. Later I removed one of device , then sambapos started

If it didn’t open how did you remove the second device?
That it’s crashing on average and not device event might suggest a config error rather than dual device issue…

I meant I unplugged device from the system