OK I have a simple Entity Screen using the Layout Feature, added 1 Search Widget but it only displays 1 field on the very 1st use?

I have made changes - EXITED immediately (logout, shutdown).
I have deleted Layouts.

Can somebody please explain.

Opps just blow then away as trying the old “Custom” - however I changed nothing - except Entity Type.
I originally entered a different name to the Actual Screen name but Re-Created whole screen.
Give me 5 minutes as I will check Custom and then go back to Layout.

If you didn’t changed anything other than entity type probably you’re using an old version. Updating to latest may help.

Can confirm that using "Custom" works fine. Now switching back to Layout - what I will do is delete this screen and start from begining as now that it fixed it may have sorted.

OK. I’ll follow same steps and check what is happening there. Thank you very much for sharing.

@emre I can confirm the same issue exists in the latest 5.1.58 download, thanks. The crazy thing is it does not occur on my 10" AUS Tablet? I have logged out (& exit) on both systems…

I previously reproduced and fixed that. Now I can’t reproduce it. Is it something different?

No the same? But for some reason is occurring on a 27" Touch screen (host) but not a 10" Tablet. The Tablet brings the screen up first time ok?
[EDIT] Come out of Design “Layout Mode” columns disappear except 1st - press the Button Header (Screen Name) and the Columns come back. Move from the Screen to another, come back, and they disappear…

Are you sure they are both the same version? I don’t think screen size makes a difference on column restoring. Did you give a unique name for widget? Still testing but works fine for me.

Umm no name on the widget - let me test more… Nope, still fails?

Can you pm me a backup?

Can you tell me where it doesn’t work? How can I reproduce it?

ok - Open POS: Select Customer - > go to [Bar Wallets] - the serach grid should only have Member No and no other columns. Click on [Bar Wallets] again and the columns appear. 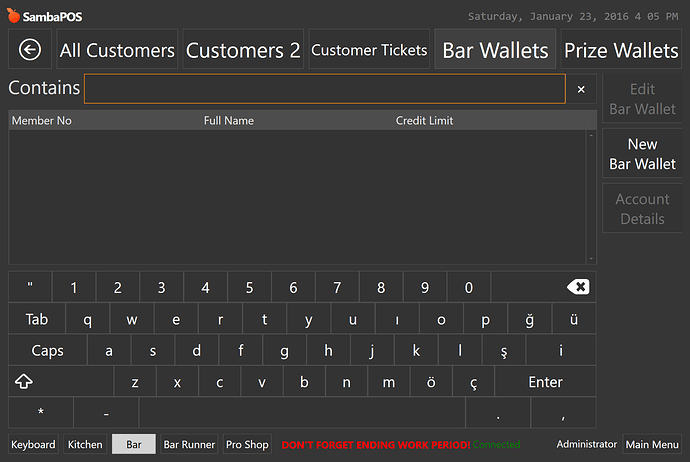 Can you click Design Mode, click on the Widget, then get out of design mode and see if it occurs?

It has to be my hardware? Bloody 27" monitor - cool, I will try a Laptop which uses a more civilized resolution and if it works then I shall not worry about it unless it occurs on a live site.

Doubt very much they will have 27" Touch screens…

OK. I finally reproduced and fixed it. Seems like a background processing issue .