On The Fly Menu Switching

Using v5, a duplicate menu would be the way to go for sure, though that is not what I suggested. I proposed creating a blank “dummy” menu that you shift a single Category in and out of.

Hey all,
The new restaurant I’m helping to setup has 3 menus - one for Lunchtime, one for Evening and one for Sundays.

According to the post above, duplicate, but slightly different menus can be fast switched in V5. I can’t seem to make this work.
I have:

And when the time passes - nothing. The menus don’t change. Any ideas?

Triggers don’t work while inside a ticket. It’s best not to use triggers. I’m not at my computer so I can’t demonstrate but there are ways to automate it without triggers.

You can create 3 separate Rules for Ticket Created event and on each rule you can switch menu according to time. 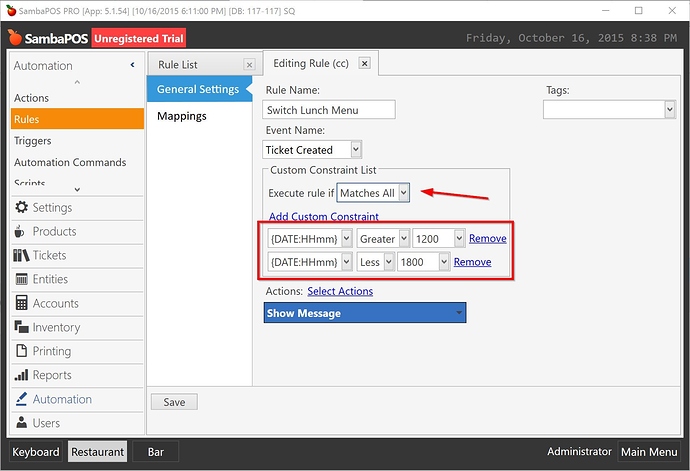 Hi Kendash- what sorts of things would you use triggers for then?

Hi emre - that works beautifully on time - what would I put in the field to sort on day? {DATE:DD}?

Thanks for your help, Bryn

Triggers are good for timed database backups and maintenance tasks.

what would I put in the field to sort on day

It depends. Better give us some details about how you’ll use day.

I’ll use Monday - Saturday for one menu (but will need times on this one to differentiate lunchtime / evening) and on Sunday will have a third.

{DATE:ddd} Matches Tue|Wed|Thu|Fri for example is valid. That matches only Tuesday, Wednesday, Thursday or Friday but if any other day it wont evaluate as true.

@Jesse was it Equals or Matches?

Hi Guys,
The restaurant is now open! Most things are going well, there are a few crashes (that’s for another thread though). However, the pressing issue at the moment is that the automatic menu switching doesn’t work.
My action and rule is below. The rule has a mapping of * all the way across. The others are setup the same, but obviously have different times/days.

Any idea why it doesn’t work? 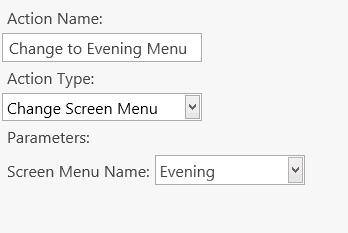 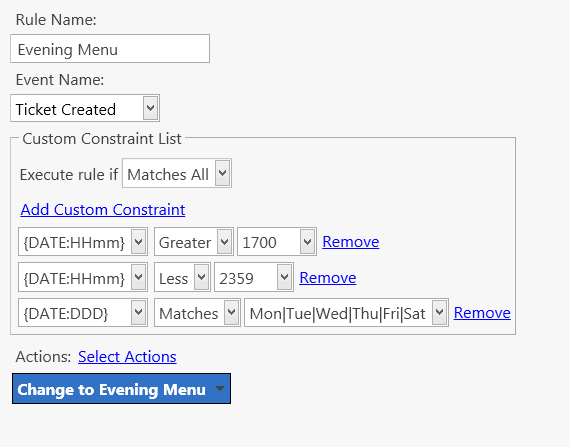 Create a show message action and include that action in this rule to ensure if rule is triggering or not. IF you see message when you create a ticket it means constraints working fine but there might be a problem with action configuration.

It should be firing the lunch menu at the moment - it’s not firing anything.

I tried changing my time and date, and none of the 3 rules are triggering.

Create a database backup and PM me the zip file.

Did you took this format from a tutorial? I’m asking to correct that.

Emre, Kendash gave it me above.

OK so probably where he copied it from is also wrong. We’ll correct this.

Is it working fine now?

Hmm I don’t think I copied it I think autocomplete did that for some reason. Apparently my phones autocomplete was trained to that tag maybe I did that at some point.

We can gather such stuff under this page.

Awesome reference. Who knew there were so many date/time formatting options? 8)