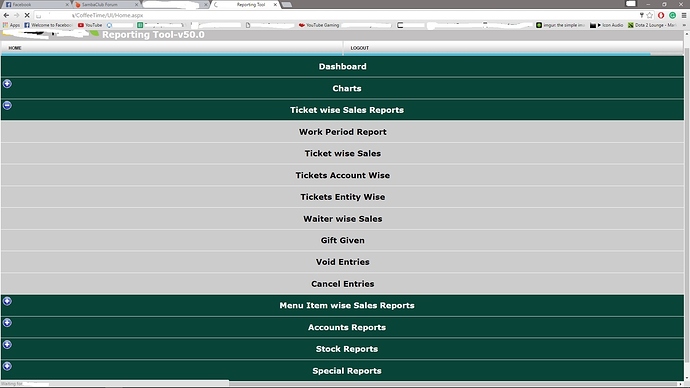 Someone made this called Reporting tool.It’s a online reporting service. They made it from v3 source.It’s really awesome.Can you guys introduce it to SambaPos?

Hmm looks nice. Do you have more screen shots? Do you know who did that?

Can we discuss through mail?I don’t wanna discuss publically.I also have source.

Can we discuss through mail?I don’t wanna discuss publically.I also have source.

In all seriousness I think we are close to supporting something that can allow this with much greater ease in beta right now with v5.

Whatever that website is it looks unfinished it is full of placeholders and is a stock un-configured Wordpress theme it seems.

I would easily buy this – is it for sale?

Great Jobs for the POS and really enjoying

Just gonna add I made something similar to this with all the features i needed. I could easily add in everything seen in this screenshot

Can you make it a module and sell it or distribute it? I’d pay or “donate” for it, something like this would be VERY good for our use of SambaPOS.

Just thought I would point out we now have some advanced reporting capability with the new GraphQL API it will be available in next version .61

This API will be able to query custom reports and we can control how the data is displayed via HTML or other means.

Here is an example using a web based interface showing the raw query of one of my Custom reports called Tips by Tickets.

@Jesse that is outstanding!

how much for your chard?

i have very happy to hear that, thank you very much