how to troubleshoot slow print job?

video of how slow here
https://www.amazon.com/photos/shared/DLPUQnRETzm9zwbvB_AstQ.H6Sq1iAk5zPUwhhm0ctRuq

So far I have tried:-

Try looking for un-paired brackets in your printer templates (),{} or [].

First is it a networked printer? Usb? What is your template?

Baud rate is not relevant to USB printer, unless you are printing it with a virtual COM port via USB, which ideally you want to avoid. If you have to use a virtual COM port with this printer, set the baud rate to the highest possible, e.g. 115200 or higher.

Also from your video definitely it looks like its not being sent to the printer and SambaPOS is doing something, however this doesn’t rule out the driver is somehow not responding to SambaPOS.

I notice it prints on the receipt printer as well as the label printer (and the labels seem to be blank), could it be there is an issue there as you only show the print queue for one printer?

Also I notice there is some sort of status monitor program running, I’ve never needed such to be running and should not be needed or have much use, I would suggest removing this and see if it makes a difference: 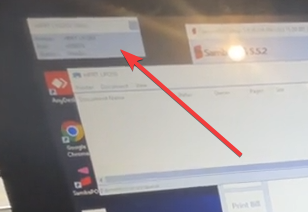 I’m assuming you have tried a different usb cable with that printer.

Could be something sambapos is finishing first before sending the print to the spooler. There is a lot of unknown to us to really help. We can provide guesses as you can see. The more you share the better we can give answers.

IT really looks like maybe your executing a sscript or something? Or some automation before it executes the print job. Can you share with us anything?

I dont think it is script or template issue, as I have changed to use Till printer that prints immediately on the same template.

I am now 90% certain it could be the sticker printer itself acting up.

It could be. Usually it’s driver related.

could be ssd hardware issue