Is there something I’m missing… 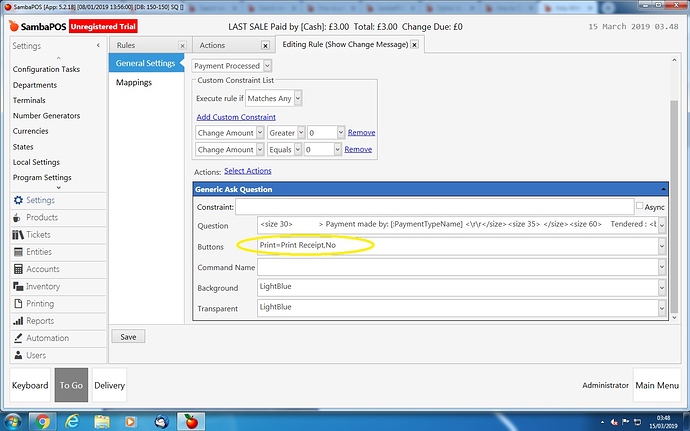 You can see here I’m trying to run the Print Receipt when ask question button is pressed… simply does not work so I’m wondering if I’ve not got the format correct in that field.

If I move Print Receipt to the Command Name field, it fires the rule I want but of course this happens on either button click. Been racking my brain for hours; the rule works but it wont do anything from the buttons field

In fact, now I’m away from my PC; I’m pretty sure I’ve not specified the correct constraints in my Print Receipt rule… think I have Automation Command Name matches Print Receipt but not a Command Value to go with it… I will have a look at this tomorrow and see if that’s missing

So in the command value field put print receipt

Then create a new Automation Command Executed rule. The rule constraints will be:

Make sure you set to MATCHES ALL

Add your print receipt action to this rule and save

In fact, now I’m away from my PC; I’m pretty sure I’ve not specified the correct constraints in my Print Receipt rule… think I have Automation Command Name matches Print Receipt but not a Command Value to go with it… I will have a look at this tomorrow and see if that’s missing

I can’t believe I didn’t figure that out… needed a break for my brain to catch up obviously! Thanks @RickH, if I get stuck I’ll let you know but should be okay

Update: Of course that fixed the issue, just another quick question… It appears my receipt printer has a default codepage set that doesn’t include certain characters (samba set to 437); I have run an execute command to set the codepage to 437 at the top of all my print templates.

It does work, but will running that command on every print cause any issues?

Shouldn’t do, parameters can be set via xct code.
In theory I think they should remain set until updated or init command sent (not sure about power failure) however I have only ever really used one off commands.
Although saying that EB (enable bold) requires DB to unset, pretty sure these are xct helper commands rather than formatting shorthands, although may be wrong, never tried just sending ED once and checking next print.
Have you checked the printer utility tool and if it have a option to set codeset?

It doesn’t seem to be very happy in ‘Printer Class’ mode if that makes sense? So i’m using it in Vendor Mode with Generic/Text Only printer setup which means I can’t access the printer through the utility tool it came with (doesn’t detect as a printer).

I’m sure the xct command does stay in place until another command changes it but I put it in the template just in case really; sort of failsafe

Not sure what you mean about printer and vendor class?
I have used both generic text and printer drivers came with it and found no real difference.
I would have thought utility tool should communicate direct with printer… at least I think mine generally have. My network setup printers can be configured with tool without being installed at all.

Basically is a USB printer; Star TSP650. Windows (badly) attempts to install printer drivers automatically which just don’t seem to work - set dip switches to vendor class on the printer itself and I can manually install the driver - but it’s own utility program assumes it’s not connected

Just one of those things I think; it works perfectly when installed as generic/text only but with the actual driver installed windows doesn’t even detect it as being connected.

Will carry on having a little play see if I can get to the bottom of it - it’s not a samba issue; purely a windows issue.

Star is your issue I would stay, have personally always avoided them, as I understand it they use an alternative to ESC/POS unlike almost all other epos printers, guessing the mode your changing is forcing it into what others refer to as ‘epson mode’ which is the esc/pos which epson using has kind of made it the standard for pretty much everyone other than star.

Yep, they have a wonderful emulation they seem to use “Star Line Mode” - was an old printer I had hanging around so might treat myself to a better one… it will do for the time being though haha

, admitedly I’ve had to redo all my ticket templates into html format as esc/pos wouldnt work but I was thinking of doing that anyway as the output on the receipts looks so much better now