I have some Reports that are fairly wide (lots of columns), and I only have a Ticket Printer (no LTR or A4 printer), so I was wondering about possibly rotating the Print by 90 degrees so that it would be able to fit all columns in the Print, assuming it doesn’t have too many rows. 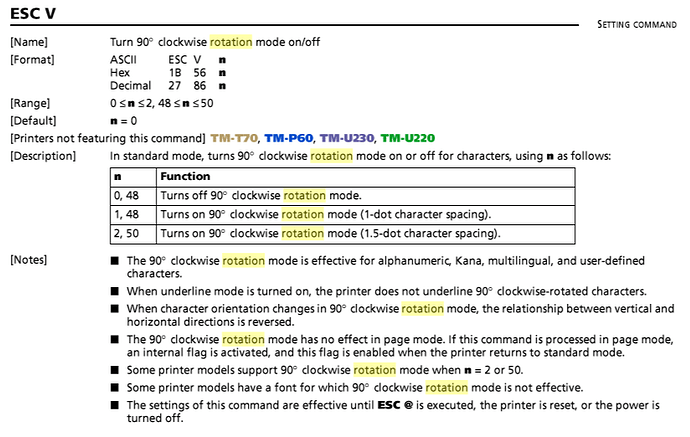 <XCT> commands would then be:

Another idea would be to somehow set the Font Set and/or Size to make the characters smaller. It seems many printers have at least FontA and FontB 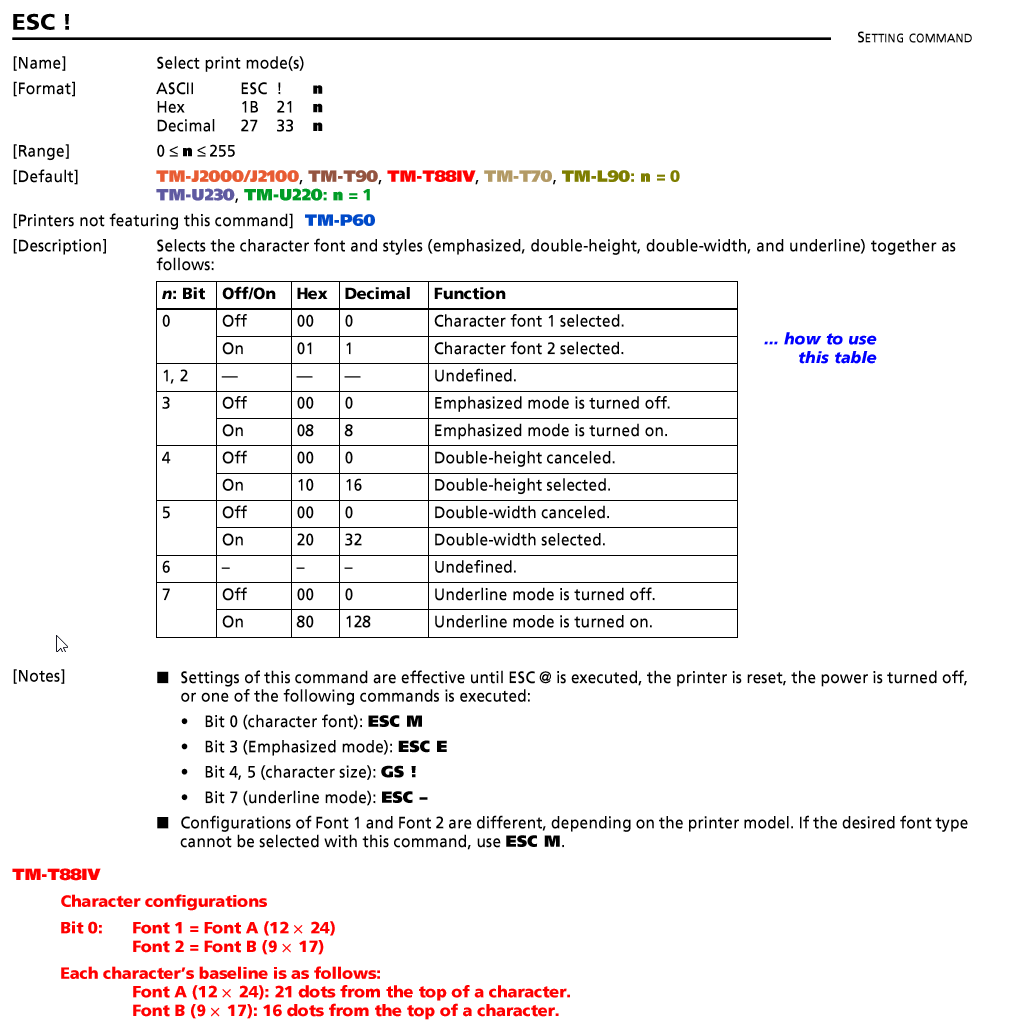 XCT commands in this case to select one of the 2 Fonts would be:

Another command that appears to do the same thing: 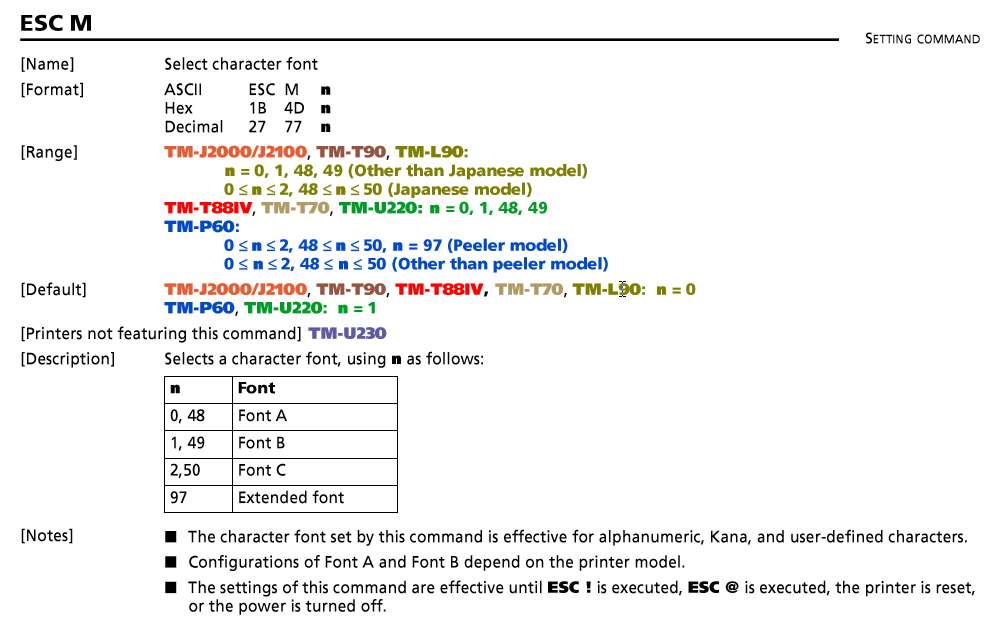 XCT commands in this case to select one of the 2 Fonts would be:

Just for reference, the Reset Command ESC @ is:

In any case, the question is:

How do we execute an <XCT> command when printing a Report?

Can the command go in the Report itself? @emre, do you think you might be able to add that feature somehow?

since we need a Ticket to use Execute Print Job action?

It will execute XCT commands for single line templates without the need of ticket.

What about multiple line Templates that only contains consecutive XCT commands? 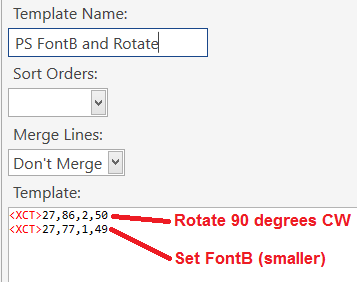 Can we do something like this to read {SETTING:X} using Ternary Operator to execute different commands depending on the setting Value? Will it work? 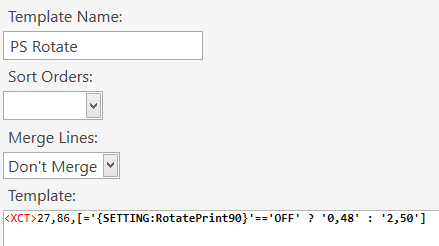 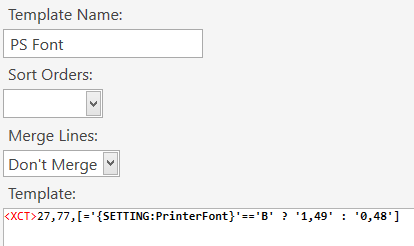 Oooh… this would be awesome if it worked… will it work @emre? 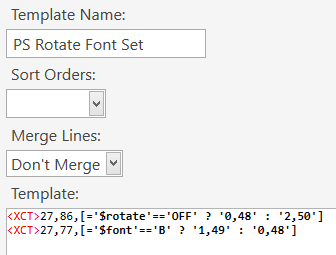 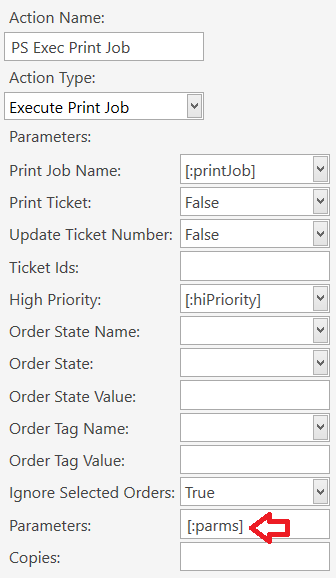 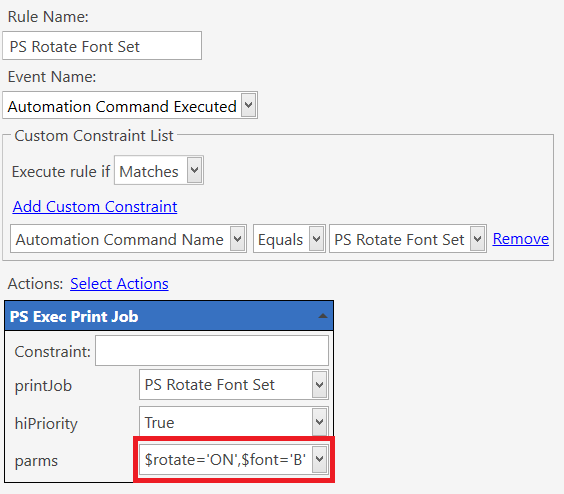 Is that parameters an existing function??

Yes, it was introduced in .61 Beta and is in the .62 release. I have not tried it yet, but assume that is syntax based on the description, though not sure if it supports multiple comma-separated parameters:

Parameters setting added to Execute Print Job action so if you define $KEY=Value, then $KEY values in printer template replaces with Value.

Real-world example where I would use this: 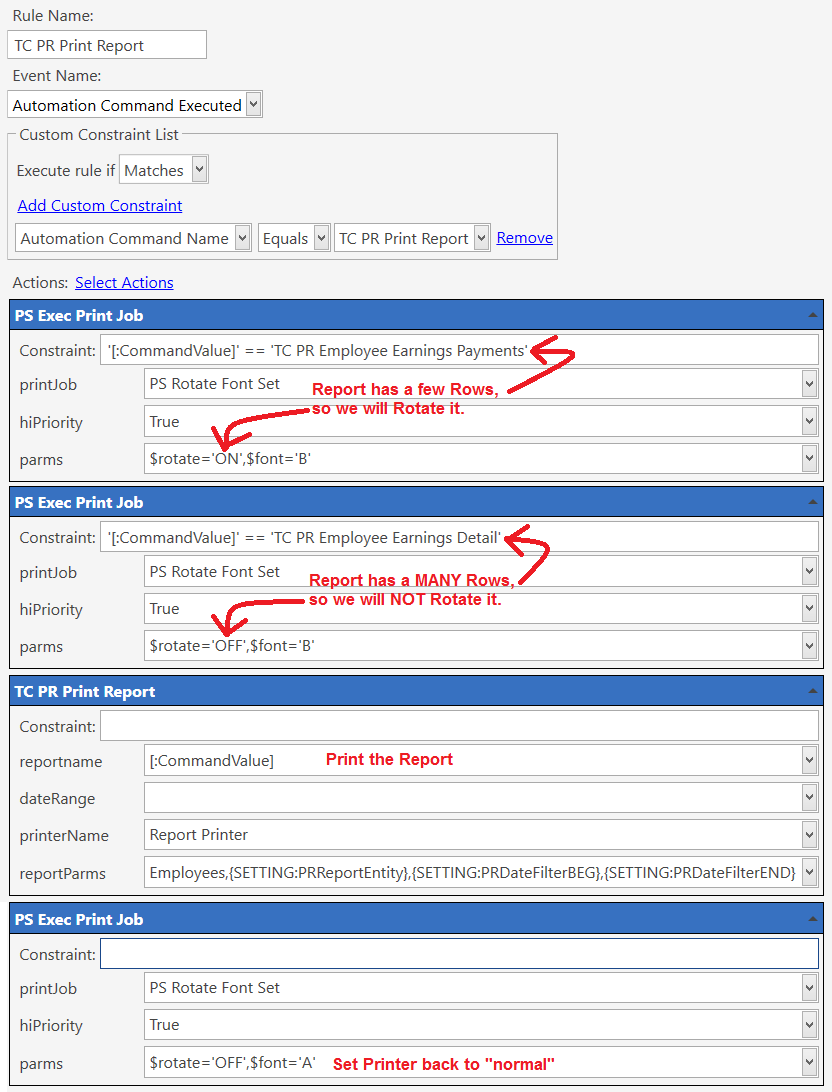 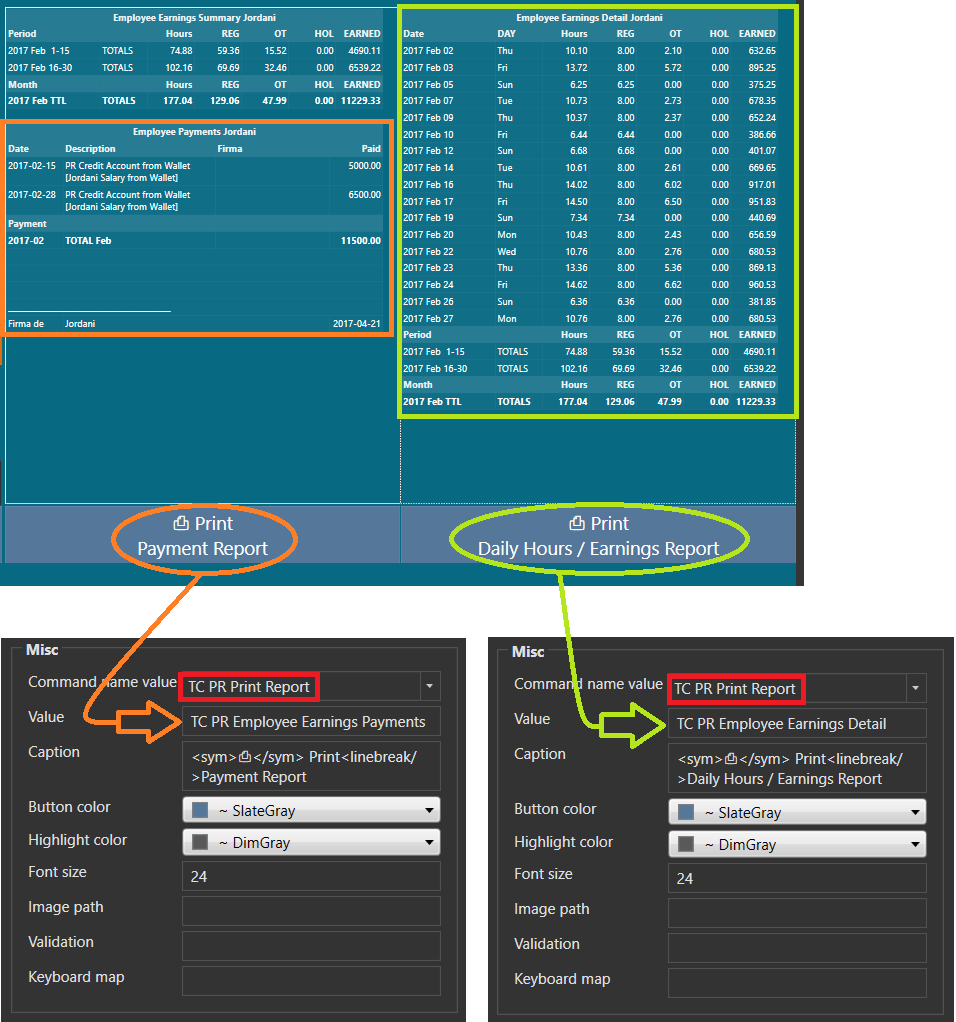 I tried it and received this error:

Tried without the quotes and same error:

I have a feeling the ternary expression is not executing, probably because it is not supported.

I removed the ternary expression and just set the Template to execute the command for FontB:

However, the font size does not change… hmmm… I wonder why? 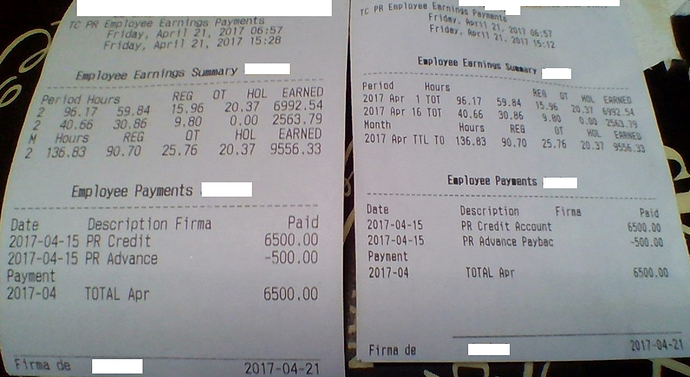 @QMcKay did you tried directly adding XCT commands inside report template? I don’t have a printer so I can’t test it atm but as far as I can track from the source code it keeps XCT commands after the report header. Solving it in report template might be a better idea as it will also work when it gets printed through report viewer.

OK when I think about it your idea might offer better flexibility. Can you pm me a backup so I can better track where it fails.

did you tried directly adding XCT commands inside report template? Solving it in report template might be a better idea as it will also work when it gets printed through report viewer.

I never tried XCT in Report Template. I just assumed it would not work. It would be great if Reports supported that. I should have tried it.

Yes, I am using Exec Print Job action to simply fire XCT commands before using Print Report action, and again after to fire XCT to set the Printer back to normal.

To simplify things, if I could use Ternary Expression to derive the command, I could use a single Template/Job. Without ternary expression, I need 4 Templates/Jobs.

OK when I think about it your idea might offer better flexibility. Can you pm me a backup so I can better track where it fails.

I assume that when the parser sees <XCT> then it does not even bother trying to evaluate expressions on the line first. Instead it just takes what follows after that and tries to execute it. Of course the expression is not purely numeric until it is evaluated. I tried different combinations of things for the expression, but always get the same error about it not being able to convert String to Int…

That said, I might be wrong. The Preview appears to evaluate the expression: 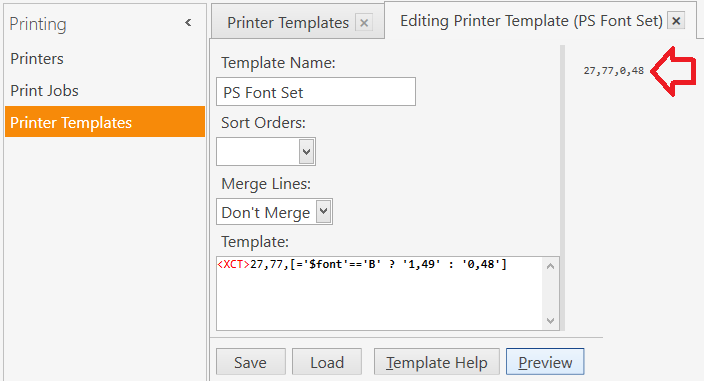 I learned something else. We might not need to set “Print Ticket” to True.

However, it is important to use hiPriority False on the Reset Job otherwise the Font is not changed for the Report … 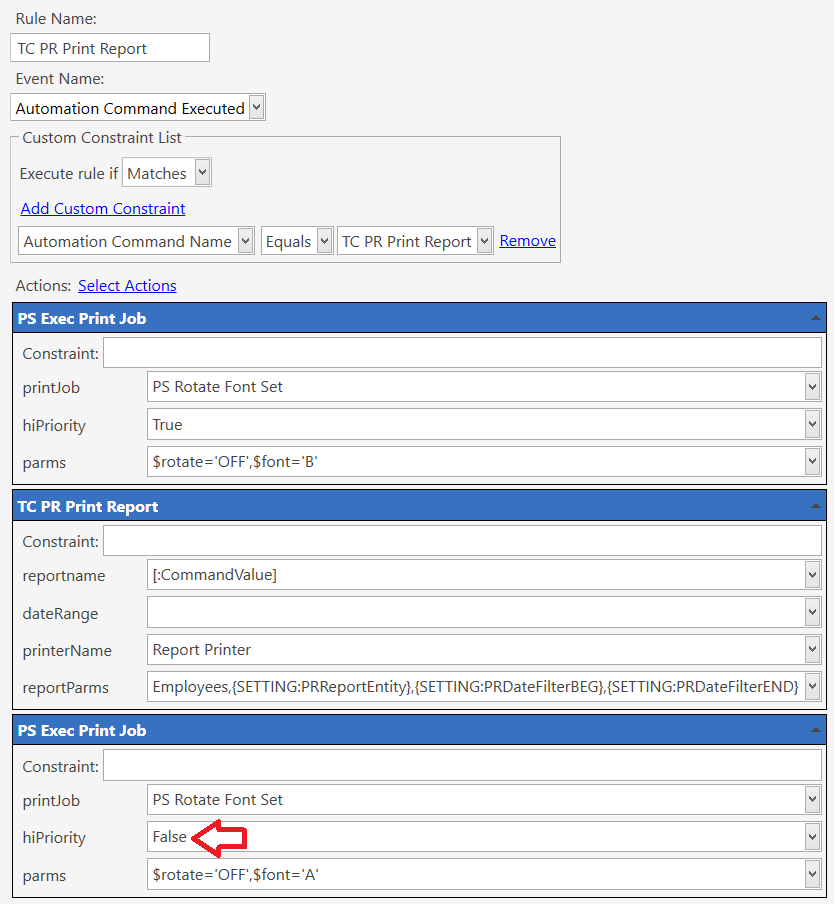 @QMcKay I can add parameter feature, executing expressions etc… to print custom report action. When multiple actions used it may not work as SambaPOS probably reset / initialize printer settings when a new printing starts. I wish I have a printer so I could test that

Hmm… check this out - this is printed to TXT… notice doubled up single quotes where the $KEY would be:

I am at home today, so cannot test with actual printer unfortunately. Maybe I will go down to my shop to try some more testing today.

Changing Template to this: 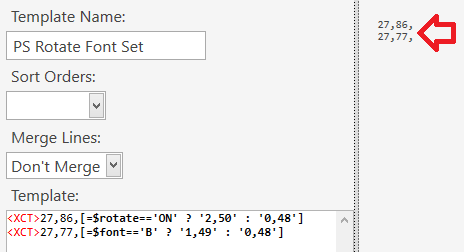 And with different $KEY parameters …

I think that would be the best!

So print custom report already have parameters feature but works differently. Instead of $key=$value list it accepts a comma separated parameter list and replaces $1, $2 etc…

So you can try adding commands into the custom report template. They’ll appear weird on preview but I think it will print nice. You can better send it to Notepad instead of print preview to test it.

If it works fine we can add an additional parameter to print custom report action to add these commands on top of custom report template so you can use single template for both displaying and printing.