Print to kitchen when payment processed

I’m wondering if there is a better way of switching between users. On our old system, user A could be halfway through entering a ticket, user B could then login to the till and put their own ticket on, user A would then logon and resume entering their ticket. Its a busy bar, so sometimes other staff need to jump on the till maybe whilst the other person is pouring the drinks or waiting for the pdq machine. I’ve almost done this through on hold tags. I’ve created an automation command - “log o…

In regards to the tutorial within this post. When a user signs off the order prints into the kitchen regardless of if the bill has been settled or not.

I’ve prevented that from happening by removing the print to kitchen action… however when I create a new rule on payment processed it doesn’t seem to fire the order to the kitchen?

Mappings are correct… I’m wondering if it has something to do with the ticket state?

Is there a simple way around this?

I’m wondering if it has something to do with the ticket state?

Maybe. How can we know without seeing it?

There are several things that can prevent printing, including the order of the Actions in the Rule, and the Action itself.

Ok. When I go back later (they have staff training this afternoon) I’ll grab some screen shots and go from there.

There is only 1 action in the new rule though.

I would hazzard a gues in the senario of;

That the ticket closing order state update is making the orders submitted and the kitchen print is set to print New orders only…
But that would not seem to fit your payment processed plan as if not printed till after pay they are likely paying up front. Might be misunderstanding.

Scenario is correct. The likelihood IS that everyone will pay upfront… however, I’ve designed it so that if parents didn’t ask their kids properly… or were unsure, the ticket can be closed and another reopened so other people can be served… and then the ticket for the parent that had to ask child be reopened.

So, im guessing somewhere in the Switch User rules i need to add an action to set the status of all items as new?

So, im guessing somewhere in the Switch User rules i need to add an action to set the status of all items as new?

You are generally safest especially in beginning NEVER to change the default Status state flow.
Doing that would effect the enabled order level buttons (ie cancel would show rather than void)

You would be better adding a NEW state of say KPrint=Print and KPrint=Printed which is what I have,
You then have better control over the state flow for kitchen printing.
I also use this instrad of print job mapping for my kitchen order by having a custom product tag for is kitchen order and on order added if {ITEM TAG:Kitchen Print} is not null Order state KPrint is set to Print.
Then on ticket closing or wherever you print using print action where order state is set to Print and follow with state update of Print --> Printed.

Its just minicing the default New->Submitted flow but you can manipulate to work with switch user/hold ticket without messing with the default status states.

i sort of get what your saying… I may need help achieving this. Its a shame that its all installed now and I’m unable to play… whilst its all locked up. Im hoping to get in there tomorrow night to get this working.

It prints if it just an ‘Payment Processed’ ticket at the moment… just not if its been closed and reopened.

Have 2 systems I’m doing at the moment, heads all over the place lol.

Yer, its the closing and opening thats causing you issue.
Without filtering new orders the kitchen print would reprint every ticket close on the ticket closing rule.
As you have it on payment processed you could probably get away with it printing regardless of state if you set the payment processed rule to be only on final payment (remaining amount = 0) as this will only happen once per ticket…

thats how I set it up, it don’t print anything if its been closed.

Wonder if there it can be “Order State = Submitted” too?

Wonder if there it can be “Order State = Submitted” too?

No, you just change it so its not only printing New

Will sort a screenshot, hang on.

If on payment processed with remaining = 0 you should be ok with this way.

Just take out the State name and state so its like normal print bill action and will print all aplicable orders anytime the action fires.
It doesnt work on ticket close as would then send every time ticket is closed which if not paying up front would give kitchen copy every time the ticket is open&closed but on final payment shouldnt be a problem. 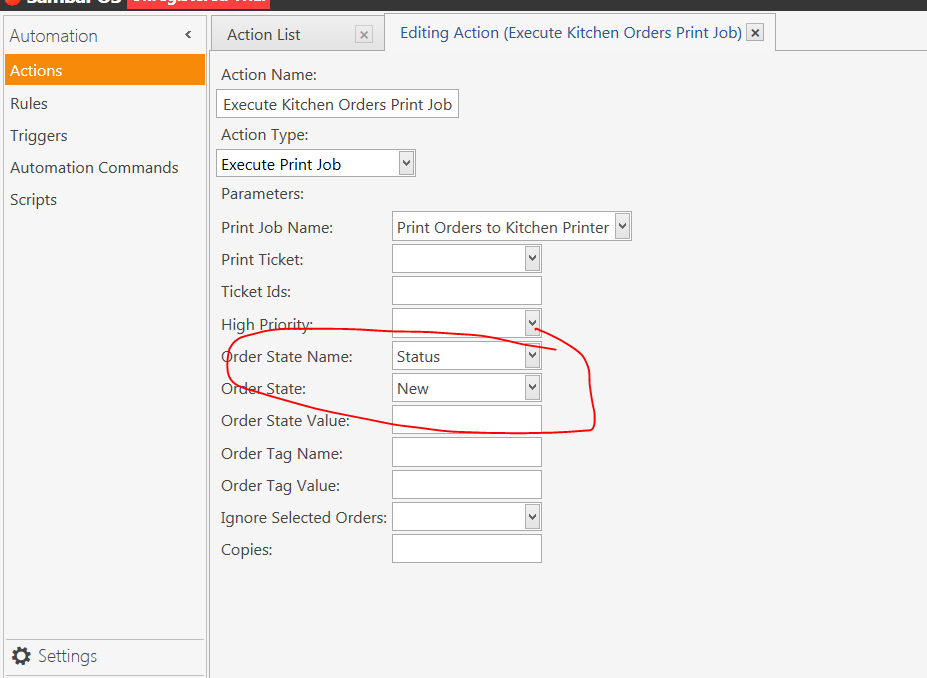 Woooooooo… ok! Thats something new for me.

Things can be so blimming easy! Awesome.

Appreciate it loads, I should be able to get this now.

edit, i didn’t read all you said, i just looked at the picture lol.

Delete all is awesome. Thanks.

Was going to say, what you on about tag LOL