Need to add some line in Template ?

Have you defined a character set in driver?

@markjw, do you know how slow T20II printing in HTML (graphic mode) compare to TM88 III or IV. I know V is fast.

do you know how slow T20II printing in HTML (graphic mode) compare to TM88 III or IV.

Those are the technical specs of the printers. Printing HTML mode on any thermal printer will be slower compared to ESC/POS mode but the faster the specified print speed, the faster it will be and you will still see improvement in any graphics modes.

I would say most printers these days is 250mm/sec or up. 300mm/sec or higher is considered fast and newer printers print this speed or higher.

Yes, i have defined it as following:
It leaves a space instead of Charcters öéäü 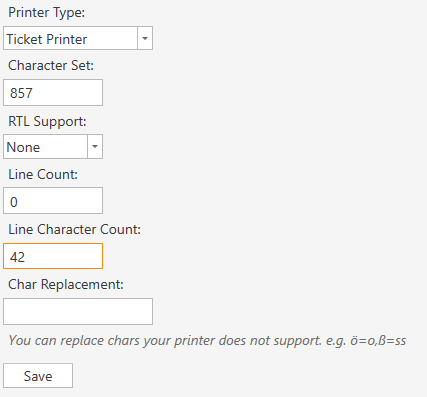 That screens not driver that’s samba.
Check for options in print driver in Windows.

In computing, a code page is a character encoding and as such it is a specific association of a set of printable characters and control characters with unique numbers. The term "code page" originated from IBM's EBCDIC-based mainframe systems, but Microsoft, SAP, and Oracle Corporation are among the few vendors which use this term. The majority of vendors identify their own character sets by a name. In the case when there is a plethora of character sets (like in IBM), identifying character sets t...