OK, updated to yours.

FYI, bold has no effect or trying to increase size ie j22

Probably a printer driver issue for that then. Is the orders printing correctly now?

Labels were printing but still strugling to get it to not print voids.

Have tried, state not equals submitted
and matches all not = new and void

Have formatted ticket printer no problem but am trying to add a label printer to go with kitchen printer to print labels for take away orders.Have got the printer working to print orders via windows or text printer option but on either formatting doesnt seem to work.If there a different formatting code to be used for windows printer template?Justified seems to work, but center < C22 > or < EB > etc dont??

however cant see how to set so only new orders / no voids are printed on labels.

It sounds like what default kitchen printer template already configured to do. The only difference is you need to modify [ORDERS:Void] section to print nothing.

It sounds like what default kitchen printer template already configured to do. The only difference is you need to modify [ORDERS:Void] section to print nothing.

thats what i tried to do by moving all ticket template under the {ORDERS} tag but just ment it printed blank ticket for voids.

Have been trying to constrain the rule to only print submitted orders but still prints voids as the become submitted when closed and also still doesnt print first order line… something odd going on.

I have looked the other languages but main thing atm was the stopping printing voids before spending too much time working out formatting.

the documentation claims its compatible with epsons escp

You took everything out from under [ORDERS:Void]?

I think the issues were contradictions between the print job action looking for new orders and the rule saying no new or submitted only.
Have tried removing the change status to new on void button to see how that changes things.
I know this will mean that voids will not go to the kitchen printer but think that can be resolved by making a voided order job to kitchen printer on order state updated to void rule.
Does that make sense to you?

Yes, it will print just the ‘header’ text, the ticket details.
Thats why i tried moving the ticket info to under the {ORDER} tag but all that did was mean it would print a blank ticket.

On a seperate note would you know of a way to allign the order tags in a line list rather than each one on a new line? 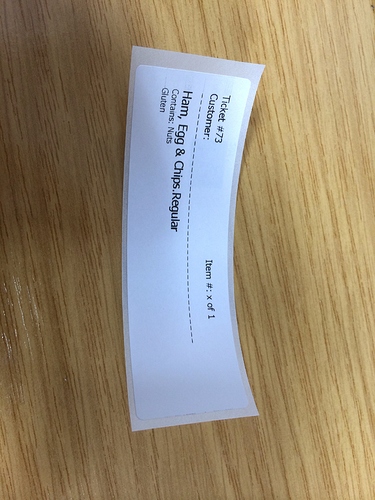 73ef2750e9cce8d2.jpg2448×3264 1.82 MB
This is my label as it stands atm, would like to set ingredients as tags as another post on here has done but to have them listed on one line rather than a cortical list.
i am using html formatting, my template atm is;

the ingredients is more towards allergies, in UK you are ment to list all of the 14 alergens in an ingrediant in a dish

How to use the \r format template?

In my opinion whenever it comes to something like item name I would always keep it on a single line, especially when it comes to things like kitchen printer as consistent format/layout as possible to ensure it is as clear as can be at a glance, meaning it knock the size down one.
That is just my opinion

@JTRTech I share your opinion I feel it should be as clean, clear, and concise as possible. However not everyone shares the same vision additionally some languages and cultures typically require longer names. But I agree I personally feel that if a name is too long to fit on one line maybe I should shorten it.

@kendash, I understand what you mean about other languages and there will obviously always be an exception to any idea/plan.
I would say that on the average 42 letter printer (obviously some are less) that you would get enough of the name to know what it is, and personally would still so with single like clear layout (missing) the end of the name than start having some single line and other on two lines, but again just my preference and always exceptions.
The bit which would cause a problem with longer names which I can imagine thinking about it now is the portion size if used which (although ive not checked) goes after the product name obviously adding to the length…
And thinking about it presume it would on any printer as it does on ticket/receipt.

Very good point and something people should think about.

Not that I need it but would there be a way to separate the portion from the order line on a ticket? Perhaps to enter it on the next line above the {order tag}

Check out this thread…

I’ve added {PORTION} and {PRODUCT NAME} tags. {PORTION:X} also supported if a separator other than . needed.