I’m trying to read ORDER STATE in my Kitchen Display, was not able to access {ORDER STATE:Status} nor {ORDER STATE MINUTES:Status} for some reason.

ORDER STATE:Status is updated to New when new order added to ticket, and updated again to Submitted before tick closing.

I could not figure out what’s wrong with the way I’m accessing ORDER STATE data, any help would be much much appreciated.

Result from reading with {ORDER STATE:Status} 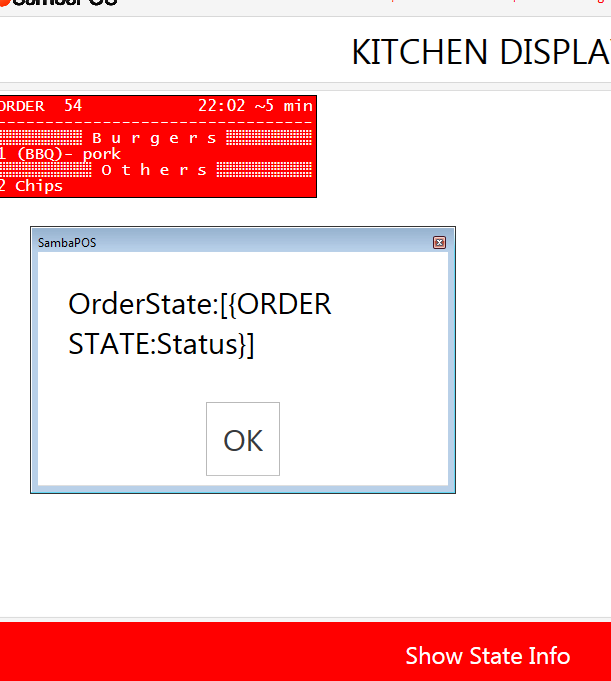 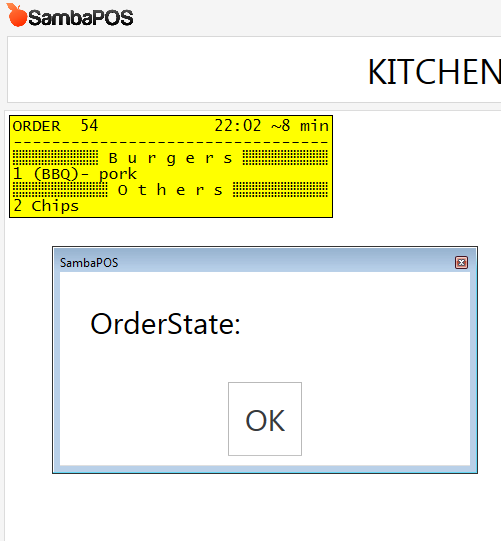 Ok so lets look at your scenario… the kitchen display your using is a Ticket Lister… You can easily check the Ticket State of tickets. Lets say you want to use Order State… well which order is it going to read from when you have more than one order on the ticket? Answer is SambaPOS has NO idea what order you want to read Order State from.

To do what you want to do is possible with v5 and the new Task Based Kitchen Display but you will not be able to use Order State to filter the tickets in a Ticket Lister. You can filter by product and Ticket tag however.

You can use Order Filter setting to filter Order states to show specific orders on a ticket that match the expression. 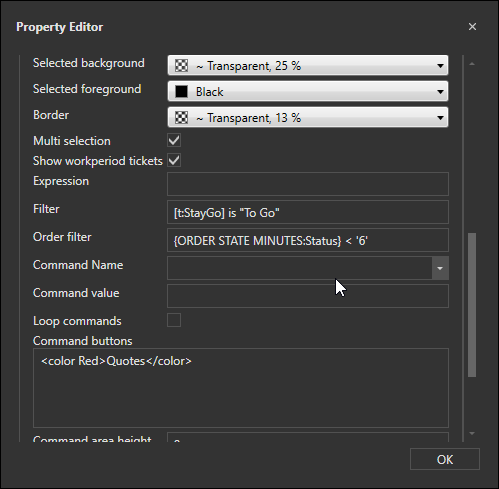 I see what you are saying Kendash. I thought it might work since Ticket Lister was able to filter by ORDER STATE, and I read how @rnunez was able to use {ORDER STATE MINUTES} in order filter

Thanks stephanhenning I created three areas or regions in the kitchen display. Each region have a filter to show the orders that I need in an special format. (excuse me my english). I show in the next image. [image] You first need create the kitchen display based in the tutorial. Next, adjust and set the three areas. This is the settings of the top-left area. [image] [image] This is the settings of the bottom-left area. [image] [image] And finally the big area have this parameters. …

Anyhow, even if SambaPOS has no idea which order I want to read, tickets in the Kitchen Display ticket lister shouldn’t just disappear off the screen right?

By the way, I thought {ORDER STATE TOTAL} was added so SambaPOS can read states in all orders within a ticket correct?

Basically all I wanted to do is to use {ORDER STATE MINUTES:Status} to track ticket age, so ticket age doesn’t affect by TICKET STATE , which can change from Unpaid to Paid while orders are being prepared.

Order stare total gives the total amount for orders with a specific state. What you need is a separate ticket state just for what your trying to do. Instead of using Status make a new state and define its flow then use that state for your screen reporting.

My restaurant operates similar we are mostly quick service.

Thanks for your suggestion @Jesse, I’ve added a new TICKET STATE for kitchen display and solved the problem. Thought might be cleaner without any a whole lot of ticket tags and states, which eats up the ticket display space.

Btw, is it possible to hide particular ticket state on the ticket display screen?? I have “Show on ticket” unticked, but it’s still showing up.

Ticket states will always show for admin users but will not show for normal users unless you define the state and check the show on ticket option.