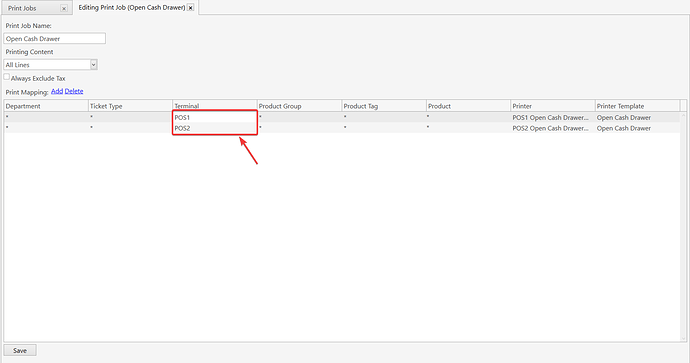 2 terminals each are sending to a different network printer to open the cash drawer.

When I test this scenario, no matter what terminal the print job is executed from, POS1 cash drawer is opening. If I delete the POS1 mapping and only leave POS2 mapping, then as expected POS2 cash drawer will open.

So it would seem Terminal is being ignored / not handled properly in the mapping.

I had a similar issue recently that was on v5.2.22 where I had a print job with a few different cases of printing different places depending on Terminal, Ticket Type and Product Tag. I was certain the mappings were all setup properly but it was printing what appeared to be randomly from different terminals, or not printing at all from some. I couldn’t get to the bottom of it and then just spread out the setup to multiple print jobs and multiple execute actions, therefore complicating the setup but also simplifying the print job mappings, and it worked then.

I don’t have a copy of the more complex mappings to hand but the above case can be reproduced and is more simple, and I believe is where the root cause lies.

UPDATE: Here is the more complex mappings I had on the other setup that wouldn’t work which I believe is also due to the terminal mapping being ignored. As far as I can see this in theory should work but wasn’t, but when I simplified it more it worked.

My belief as to how it maps is that it will find the most relevant mapping based firstly on those that are explicitly defined, then what is not explicitly defined it will follow the mappings based on *. So to explain the setup below, the line with mostly * mappings covers all other scenarios where the Ticket Type is Take Away, Delivery or Collection, as those should all be printed on one printer.

The following one strangely seems to work (as expected, under normal circumstances):

Here is another example I just setup just now (I removed the unnecessary columns that all have * using column chooser just for clarity as its on a 1024x786 screen). 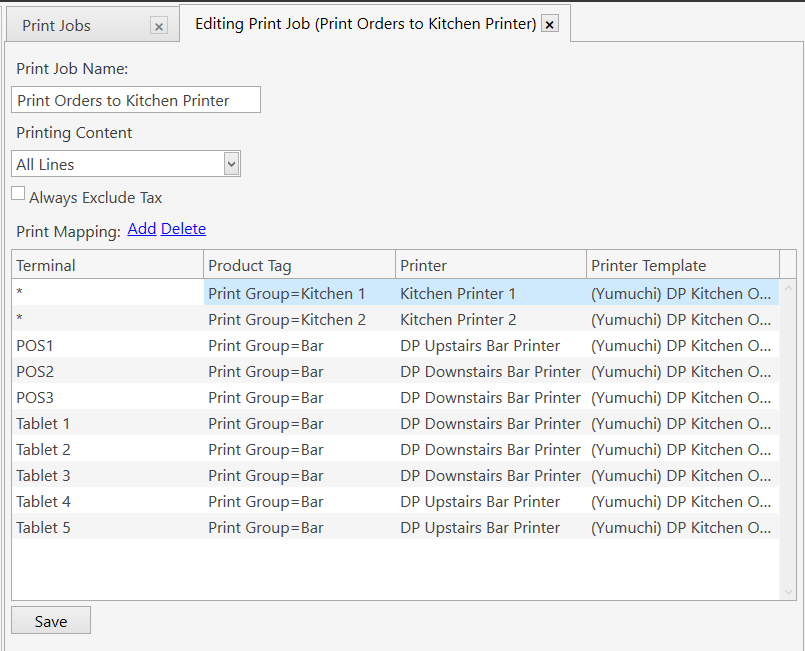 Client has told me when they close the ticket from POS2, the drinks are printing from “DP Downstairs Bar Printer” but the food items are not printing at either of the kitchen printers.