There is easy way to make promotion without using manage navigation?
Can we make expirate date for promotion, example buy 2 get 1. Promotion start date 01 june 2016 until 20 june 2016.

How would you set that in the first place without manage?

How would you set that in the first place without manage?

I think he meant he didn’t mind initially going to manage to setup the navigation but after that he wanted to use thhings in the post maybe entity screens to setup diffferent promos.

Yes, first set at rule. And we set use entity screen.
How to make program setting to check date expirated promotion?

Ok Im assuming you already have a setup which does the promo but you just want a way of making dynamic dates. Ill making and will post a quick tutorial…

Ok Im gonna assume you have a rule already to do “Buy 1 get 1 free” or whatever promo you want. Im gonna called it rule x and its an order added to ticket rule like (I assume your do something actions sests a promotion state or adds something to the order etc… It could also be called on other things like ticket created etc) 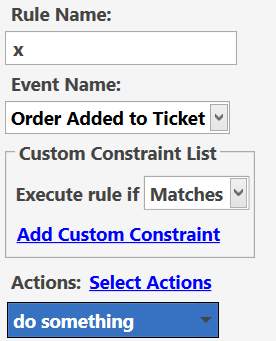 Lets add a constraint to this rule so that 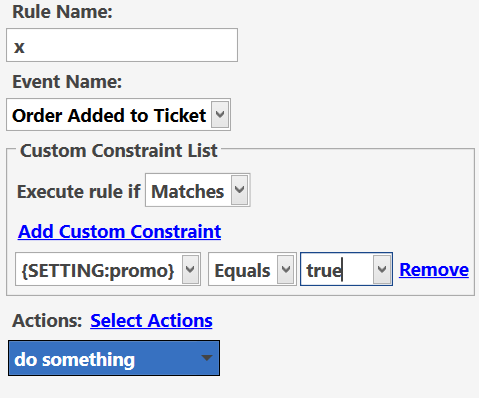 Ok so right now this promo rule will only fire if a setting value called promo is equal to true.

Lets set up the actions to toggle promo state 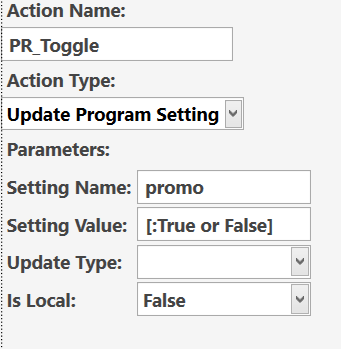 And finally some Automation commands to toggle these states 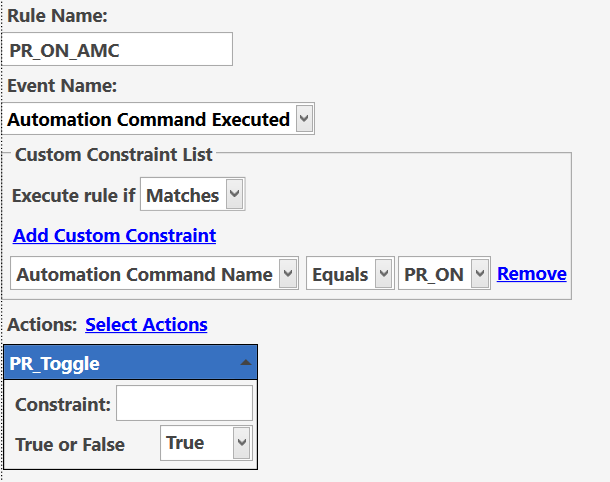 You could also use timers to trigger an rule to update the program setting automaticallly after a date has passed. If you would like me to include that let me know.

There is automatically set to start and end promotion at entity screen.
I mean we set rule example make rule for buy 2 get 1, make rule discount any item, or rule others. So at the entity we just input item promotion, or what discount item and how long promotion.
If can choice what rule promotion we want use it

What was you reason for not wanting to use manage section?

Because security, if manage open. So user can do anything, like cheating. Because that user can look all rule n change it

But is user can set own promotion they can cheat and set promotion for any item?

Am not saying it’s not a valid reason don’t get me wrong.

Why would user be adding promotion rather than management?

Im farely sure what I showed you was a valid option?

User like manager or supervisor level, not cashier. If we give manage to supervisor, i afraid they change any setting. Because its acess rule.

Supervisor can’t change price. I plan after setting retail sambapos, manage will block for every user, just administrator can access manage. So supervisor can make promotion just from entity. To change price may be from other way, html. So this is for retail.

In v5 you can give access to specific manage feature without them having access to the rest using navigate action.

Im really confused why what I showed you cant work? You map the entity screen to manager or Supervisor?

What part of it is wrong.

Yes… Like I said in that section he can add more buttons to do certain functions… If he wants to do it all automaticall like have every product its gonna be a lot of AMCs hes proably better to wait for the new beta.

If you are hoping it will be a ready made built in feature then you might be disappointed. Everything you are asking for can be built now. Did you see my post where I said you can allow access to specific parts of manage? The problem is we do not know what kind of specials you want to make. Also not every person will want to make specials so you will need to automate your own system.

A better way would be to use the nav action to go to say item tags and have a item tag for the promotion and set the automation to be based on the item tag not being null so any value in the offer tag field would make it apply.
Or if you have multiple offers you could do name,number or letter for each offer or even combinations if you changes constraint to contains.
Depends on what other tags he has.
Alternatively can’t remember if we got it but was discussion on manage section specific entity screen widgets but can’t remember if that happened in the end or not.