After implementing the time clock following Kendash’s tutorial, I’ve managed to get it to work, but for some reason, when you check the punch editor screen and you highlight any employee, it doesn’t show any information at all. 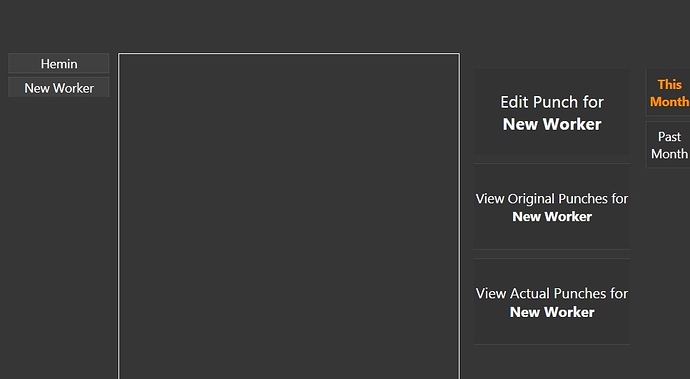 But in the reports, it shows the information correctly.

I have not tested the task with latest version. I’ll test it on a stock database later today to see if it’s something I did. Have they punched in and out yet?

yes they have, I tested punch in and out a few time, nd it works on report but not on that screen

Also Kendash, is there a way to shorten the period before a user can re punch in and punch out?
30minutes seems a bit long to do so, I was hoping to drop it to at least like 1 minute.

I saw the rules and saw the possibility to change the 30 to 1 minute, but I think I may have missed something and now when a user logs out, it says "User*** Has to wait 960 minutes before re-logging.
but in actual fact they don’t have to wait that long, they still wait for like 30minutes.

EDIT: Screen shots below of what I’ve done 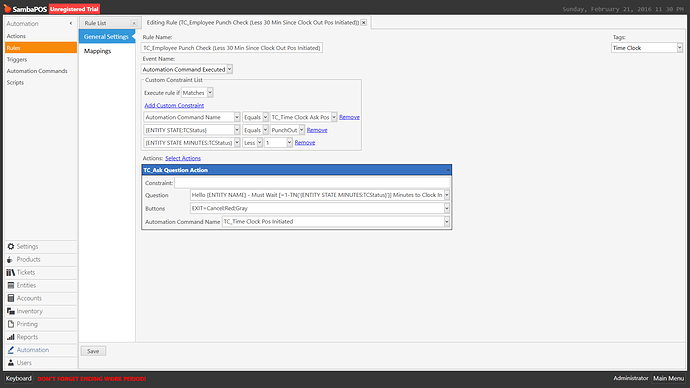 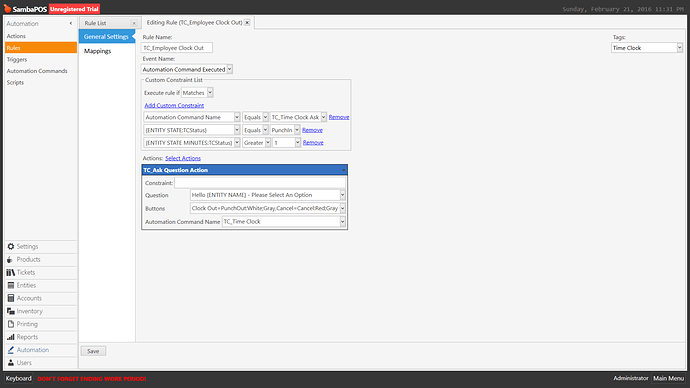 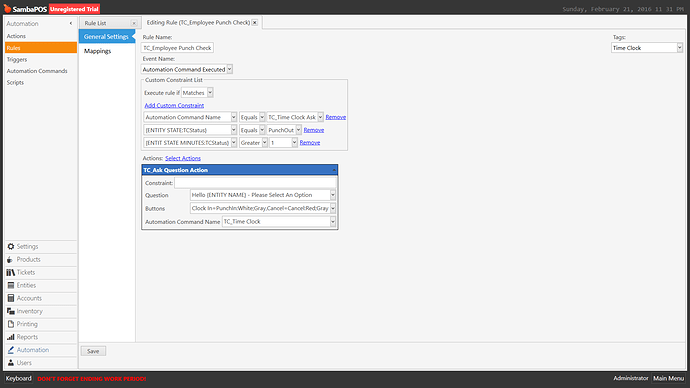 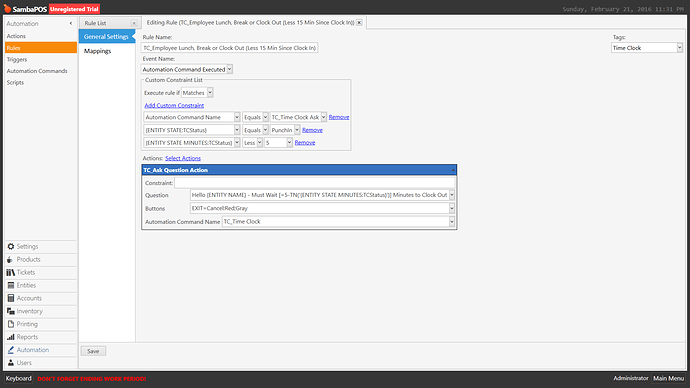 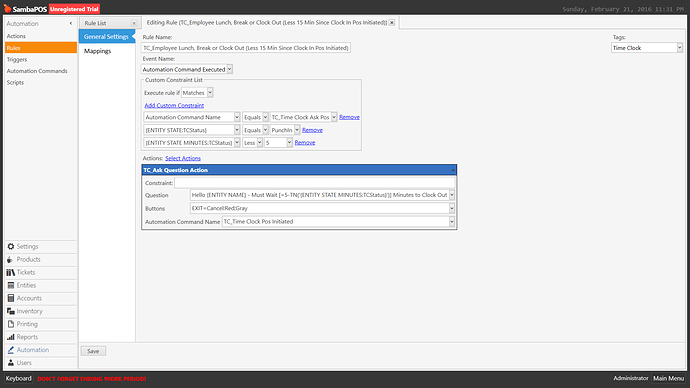 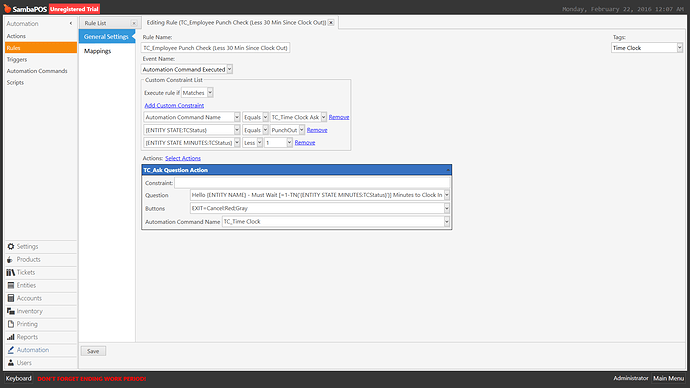 Yes you can change the wait. I’m not going to be able to show you until late tonight I just left for a trip out of town.

Hey kendash, sorry to bother you, I still haven’t been able to fix the issue with punch editor not showing any data on entity screen. Could you help when you have a chance?

I am sorry I forgot this post. I flagged it and when I can get to my computer I’ll show you.

Thanks buddy. Really appreciate the help

I’ll be working late at the restaurant today but I got it flagged I will be home around 8pm it’s 9:54 am here now.

That’s ok buddy, whenever you have the chance. No stress.

There is one thing I’m finding, for some reason, when a user clicks time clock to lets say clock out, or to clock back in, it asks for the pin, the user inserts the pin, but nothing happens. No popups or any options what so ever. A user would have to wait a certain period of time or have to do some action, or something has to trigger the time clock to do something different before a user then tries to clock out and then the option is given.

No it’s not. I might request you send a backup in a pm to me.

Alright, I sent the database to you. Looking forward to seeing where I may have gone wrong.

I have not gotten A PM yet.

I definitely sent it buddy. I just checked my sent items also.

I see it now thanks. I’ll take a look might be in morning before I respond.

I see it now thanks. I’ll take a look might be in morning before I respond.

Ok so you sent me a PM but the link for the database just sends me back to here. You must have made a mistake when uploading it.

EDIT: Nevermind I got it.

@Shivan Man that was hard to catch but you made a spelling mistake in this rule: 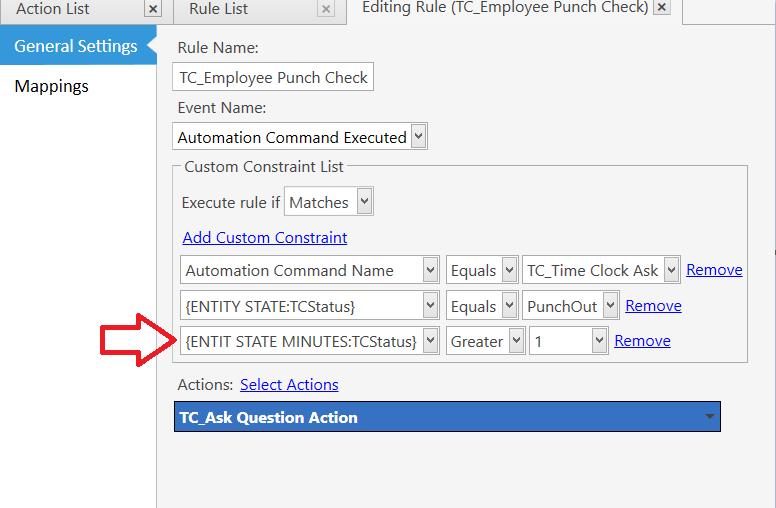 It should be ENTITY not ENTIT

That is also the culprit of the timer not working right so that one spelling mistake should fix all your issues.

PS the way I found it was with Show Message checking each rule I copy pasted that syntax into Show message then it popped up showing your spelling mistake. I didnt even notice it when I copied it… Those kind of spelling mistakes are very easy to do but hard to catch.

haha wow. well there you go.

The weird thing was, I never actually touched that particular line, except the greater than 1 part.
I may have by mistake without knowing done something to that.

Thanks for pointing that out :D. I’ll make the changes and go from there