hi
has anyone know how to integrate the UK address/post code to SambaposV4/V5, im trying to do a function like the image showing below, anyone have idea how to achieve it? many thanks 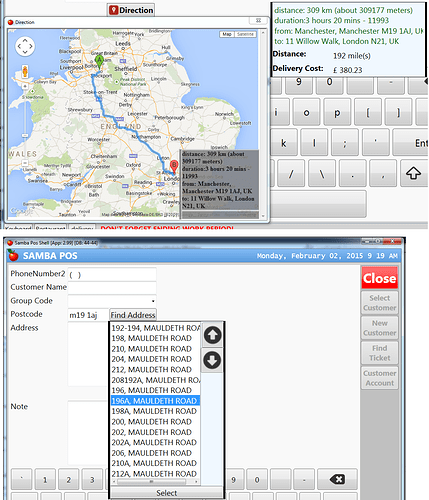 V5 has a configuration task to set this up. V4 you can’t integrate it.

V5 has a configuration task to set this up. V4 you can’t integrate it.

thanks for your reply kendash, i just can find the way how to integrate google map, but i can not find any information about the dropdown list with postcode lookup , do you have any idea with it?

Google maps will not give you a list of house names/numbers as far as I understand.
You would need a postcode database for this however the drop-down for house name/number would still be a snag.

thanks, so that mean if i got the post code database, so is it possible to archive this? if yes, can how you tell me how?

You missed what I was getting at.
You will not be able to get list of hose names or numbers from google.
The alternative is a postcode database
BUT

drop-down for house name/number would still be a snag.

The Query system in samba would look up the postcode from the list and return the town/street etc however it is made to return a single responce not a list of house numbers into a drop down.

ok i see. thanks for your explanation JTRTech.

Did you find way to setup Postcode address lookup V4 by any chance ?

I am trying to figure out away but it’s a bit of pain !

You can in v4 but need to have a address list file, then you set fields to columns based one of the fields.
Only works to street level, no list of house names etc.

Do you know how to get the address list ?

online, you buy it, can be expensive, usually cheapest option is for postal area segments.
would be expensive here as right on the border of 4 other counties which another reason never pursued as would need to buy several even for a very local deliver service.
UK right?


Been a while but pretty sure need CSV format.
I would download a sample and test before buying anything, make sure it does what your expecting.
Think you will struggle if your wanting house list based on postcode in v4, v5 more likely to be more capable but not tried.
v4 wont get any updates either remember that, most regular forum users on v5 so more possibilities for help and suggestions if on v5, not that you wont get anything for v4 just concentration is on working with v5.
2 Likes