This is to ensure that even if a table is voided or basically not settled there’s no ticket numbers out of order. (local tax law).

Can an additional number be issued at time of payment?

Can you elaborate on how you want to use the number?
Also what if multiple payment made on a ticket?

I would sugest something like the que number system witha program setting to keep track and perhaps a payment description using the value and then increasing n payment ready for next one.

@Ilias_Maier you can use {TICKET ID} instead of Ticket No. Ticket Id is not written to database until a ticket is submitted so it is impervious to cancelled orders.

Do you ever VOID entire tickets after they are submitted?

So basically I need receipt numbers, that are only issued upon payment made.

I need incremental numbers on paid receipts. And orders not paid not issued any receipt number.

Any idea how this would be possible? Number generator / automation control script?

So basically I need receipt numbers, that are only issued upon payment made.

I was looking for this also. What to do when there is split payments??

According to accountant we want to display Payment Id from Payments table as receipt no. Please help.
I tried using printing templetes tag but no luck.
Thanks a lot

What country is that that would require you to print a payment id on receipt…
You can set a payment description using I think payment processors. You might be able to use this for a custom number for payments.

Hi @JTRTech its in Hong Kong due to licensing type each payment received needs to be submitted to gov authorities so we need to print receipt number without missing one. So In samba pos database payments table has Id which records all payments received only. So voided or merged tickets dont get recorded. Thats what I needed to print out as receipt number on printed tickets to members and a copy to accountant.

You sure it’s tickets and not payments? Others have adapted an increasing number as ticket tag that isn’t generated untill payment to avoid missed numbers for merve/void.
I’ve never heared someone request for payment I’d like that for government.
@markjw has experience in Hong Kong and surely would have mentioned this if that’s what was actually required.
As for void or merged, I can’t see why this wouldn’t be an accepted process and allowing for 0 value tickets would surely be allowable for this senario

There is no such government / legal requirement in Hong Kong. Nothing needs to be “submitted” to the government in Hong Kong, a ltd company requires to be audited by an accountant but that has nothing to do with this and also only the audited accounts (i.e balance sheet, profit & loss, etc.) is submitted to companies registry, i.e. government.

This is a “request” from your accountant, he just needs to be told it is not possible and the request will go away. Hong Kong being Hong Kong the accountant will immediately suspect missing ticket numbers are an attempt to hide transactions / do fraud, but just explaining the reason is enough.

I have many clients in Hong Kong and lived there as you know Jivo, nobody ever requested this. Just an accountant who thinks he knows better and most likely a means to justify / increase his fee…

This is a numbering / facturacion (spanish) protocol that has become a standard in latin america, and south america. Many countries are adopting this system, where in they “issue” businesses numbers to use in order to track sales taxes and business tax credits. Not sure about Hong Kong, but this all started in Panama and now it’s spreading like an plaque.

To date there is truly no POS system properly handling this out of the box. There is a growing demand for a POS to allow for payment based numbering system, with modifyable prefix, and suffix, specific digits of zeros in sequencial numbering, and specifically numbering ONLY transactions where funds changed hands. NOT issuing numbers to transactions posted to house accounts, or comps, or voids. ANd only issuing a sequential number when money actually is paid and is transacted.

SAMBA has the best hope of properly implementing this, as it’s so configurable and open.

Most POS issue ticket numbers upon order creation (opening a table), which is great for the business itself to track customer transactions, and ensure all orders are accounted for.

There has been several topics on a ticket number not generated untill payment. The need for a per payment id is a new one on me.
Either way it should be achiveable using a sale flow to the ticket ref generated only at end/payment but specificly on payment set as say payment description.

Most POS issue ticket numbers upon order creation (opening a table), which is great for the business itself to track customer transactions, and ensure all orders are accounted for.

Sambapos does this with TicketNo. TicketID is different and not recorded until ticket is submitted.

Merge after submit would still leave unused numbers. I think as mark said most of these requests are either misinformed or greedy accoutants. Like those that want payment type by order item. End if day government are only interested in the fact you have sold x and pay y tax. They don’t care if it was cash or card or whatever. They just want you to pay the owed tax.

Hi All, Thanks for your reply. Let’s focus on a technical part only.
Here is what I need to display. The ID of each payment to display as Receipt number.
Maybe if its missing in this version can we have this option in newer release @emre.
Thank you. 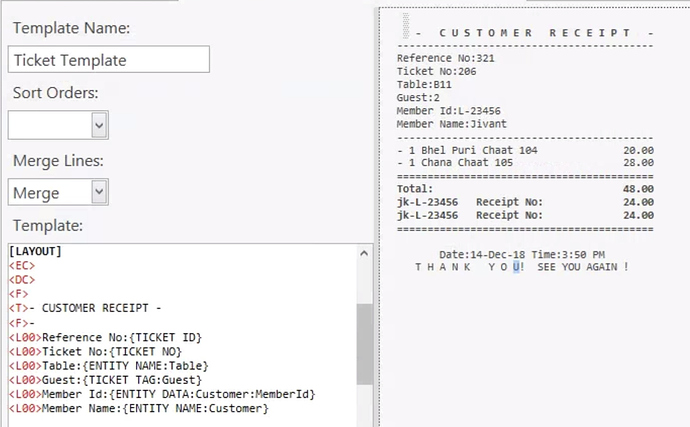 What if you have multiple payments in one ticket? You can get that Id via sql and call it whatever you want.

Hi @Jesse thats exactly what accountant wants. One ticket will be shared by many members. so each members will have their own receipt number after settling in their accounts as in my attached image above.
My Payment template is as below.
[PAYMENTS]
{PAYMENT NAME}|Receipt No:{PAYMENT:Payments:Id} |{PAYMENT AMOUNT}

I need to print out Payments.Id as receipt no.
How can i print out on template from sql. if you could provide some tutorial that would be great.
Thanks a lot.

Look up sql on Google it shows lots of examples.

Can also see how to use it in reports at kb.sambapos.com