The NVRAM is inside the printer, check in the drivers, there should be a Logo Flash Utility.
What printer is it?

The NVRAM is inside the printer, check in the drivers, there should be a Logo Flash Utility.What printer is it?

It’s Epson TM-T20 II, and I found where in the printer utility. It prints from windows. But I can not print from Sambapos. I don’t know how to implement it to print into the the BILL/Ticket.

There will be a command code just like the kick drawer code. If you save the image in the printer you need tonknow what the code is to put it in your template where you want it to print. I use this setup for my logo so i have the drawer kick code at the top of my template so the drawer opens as the receipt print and i have the image code next so that it prints at the top of the receipt

When you save the image in the printer its usually assigned a four digit code like 48 48 or whatever you saved it as. You need those four digits and the rest of the command code, i googled it for the code and format of where to put the four digit code. If i get chance later and i can get on ill post a screenshot of my code for the logo

Here are a list of commands for TM20.
https://reference.epson-biz.com/modules/ref_escpos/index.php?content_id=79

Ones relating to logo;

The bit im not so familier with is I think you need to convert these codes to HEX?!? Rick or Emre might confirm that

It look like unlike other models where you place the logo in position with a code you set top or bottom logo with the code.
Also suggests you can set auto top or auto bottom logo within the utility/driver.

You want the numbers to be in Decimal.

To print the logo stored at Keycode location 32,32 (default) on an Epson TM-T20II … place this XCT tag and code string in your printer template at the location where you want the logo to appear (i.e. at the top, after [LAYOUT])

Thanks guys, and I don’t know what I will do without you.

It’s on top now, but it’s not aligned, centered. I think that is from the printer’s software.

I will find a way

You could also try using the Enable Center printer tag:

Yes, it worked with that. Thanks.

@QMcKay Could you please help me with my printer?
It is a generic Chinese POS 58mm printer. I used a tool to store logo into printer and it prints when I use that tool. (It also prints when I use <BMP>, but I want to see if this is faster.
This is the info from my printer manual. How do I figure out the <XCT> code? 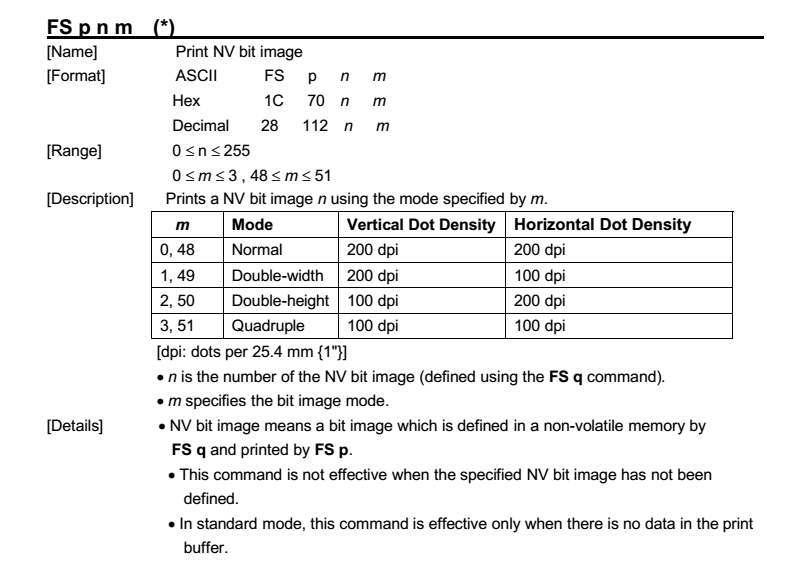 I want to print it in normal mode

You need to specify the value for n. As per your documentation, n is the number of the NV bit image. You printer software should allow you to set this number, and in the above command, replace n with that number.

Have you loaded the logo into the printer?
Im not sure is those budget 58mm printers support nvram logos - not saying they don’t mide.
Have you got a toll to load a logo in the driver?

Thank You!
I had to make a minor correction.
I had to use

It seems like n has no effect on my printer.

Yes, this printer had the feature to load NVLogo using a utility. I did that over USB. Printing is via Bluetooth.
Logo printing took a little bit of time, which has now gone. Almost instant.