I’ve looked at some refund button tutorials from ages, but I realised that they also implement the use of inventory control.
I’ve got the gist of creating a refund button and applying it to only show on closed tickets, that too requiring admin pin to be able to process it. But I do not require the item to be put back in the inventory as the setup is used for fast food, so it doesn’t really require the use of inventory.

Can it be setup without the use of inventory without it having issues with accounts screen also? The reason I ask about accounts, is because I noticed in the tutorial that after the refund button was implemented, it doesn’t quite correct the balance of sales at end of day, or doesn’t minus the funds from the sales.

I have an ad hoc refund setup using a new ticket so i dont open the e isting ticket to do a refund. I have separate accounting that reduces “sales” cash or card balance and adds it to “refund” cash or card account

Once first item is added and refund button pressed the ticket changes to a refund ticket and state and any irem added in this mode is added as a refund item.

Everytime a refund item is added you are prompted to return to inventory or not, and you are asked the reason fir return which is added to the item as an order state

You could use it or adapt it

I think that would be awesome to implement. However again, having the question to ask to put it back into inventory at this stage is not really required, so updating the status of inventory is really unnecessary as inventory is not used, is there a way to do this without any need of touching the inventory?

Also one other thing. How do we make it that when Refund button is pressed on an item, instead of the price section just showing " -" it shows example -4.00. 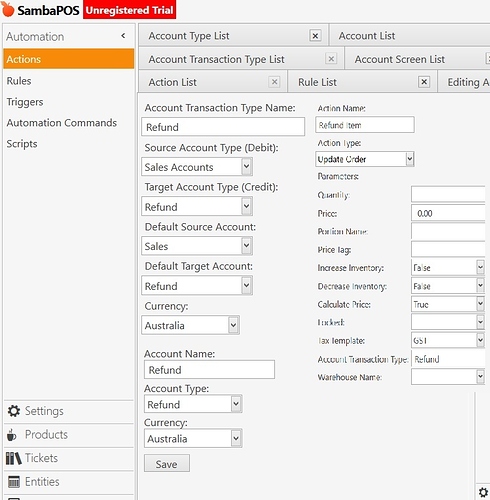 Sweet that works fine, but still trying to get those accurate report and account readings.

Accounts screen is reflecting same issue. Ill post some screen shots when I wake up.