I’ve come up with a format for a report that i feel can be immensely useful to all Restaurant Managers. It can help them understand what forms the core chunk of the business and if they want to increase sales what areas they should target.

However, since i have no expertise in SQL i’m unable to come up with a code for this report. However, i’m placing the intended format of the report out there, if anyone can translate it into a workable SQL it could be immensely beneficial.

This report assumes that there are two different departments, Restaurant and Delivery and the Cafe operates throughout the day, but for reporting purposes it has been broken down to corresponding shifts, Lunch, Dinner, Late Night orders etc. Each cell in the following report is telling you what percentage of sales does that particular department slot contribute to a given time periods total revenue. So for example if you selected “last week” and your total sales last week were $1000, out of which 100 took place during lunch hours at the Restaurant and 200 during lunch time delivery then a and B will be 10% and 20% respectively.

Custom reports could be useful for this you do not have to use SQL. Both methods could work however. Thanks for sharing! Percent of sales is a great tool.

No you can do it with custom report tags and field calculations.

ah i’m not that familiar with the custom report tags … can’t figure out how you can divide the sales by time. If anyone can come up with a sample code for the community that would be immensely beneficial

This is not possible yet but may be in future. Is this report similar to what you were thinking?

This does not show Departments but same logic could be used for Department.

Yes this is similar. This would just be expanded to include the interaction with the departments

BTW the report I showed you was not correct syntax. Even though its not available yet I wanted to correct the syntax for when it is available. 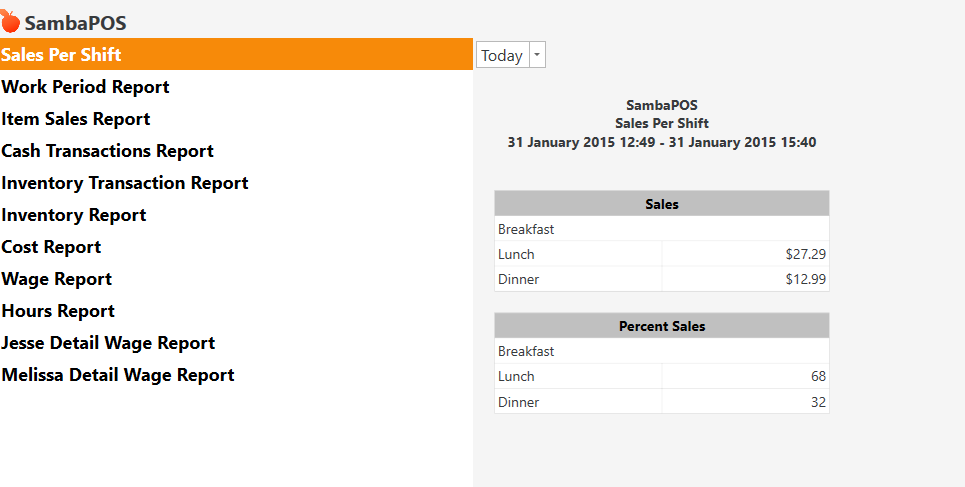 It requires a Ticket Tag that is automatically placed on each ticket at specific defined Time of day to distinguish each Service.