Kindly advise how can I restore my void button. someone deleted my void button action and the rule attached to it. I have tried to replicate the rule from another database but it’s really not working.
I have also tried rebuilding default buttons and upgrading my old rules but still, it’s never working.
I have expanded the actions and compared the parameters called by the void action with another working DB, but still not working .I am on Version5.2.2.6, indeed the latest version

The default void button works to void an order after a ticket has been submitted, is that what you are trying to do or are you trying to just remove an order incorrectly added to the ticket before it is submitted?

In samba the cancel button removes orders before ticket submitted

The void button removes orders after they have been submitted 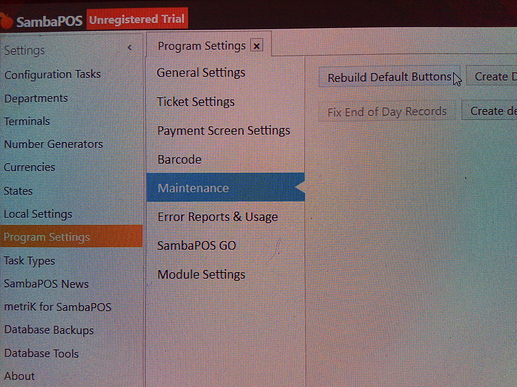 RickH, I know how void works with sambapos, just want to restore the button and the rule after some malicious manager tampered with it and removed the void rule.
I have tried to rebuild the button through maintenance as ATechAsia is trying to illustrate below, by restoring the default buttons and restoring old rules, but still, it didn’t work for me.

So tell me, are you missing a button, a rule or all together?

just want to restore the button and the rule after some malicious manager tampered with it and removed the void rule.

You can prevent user roles from accessing any part of Settings. You can give them access to menu prices an users but not anything else for example. 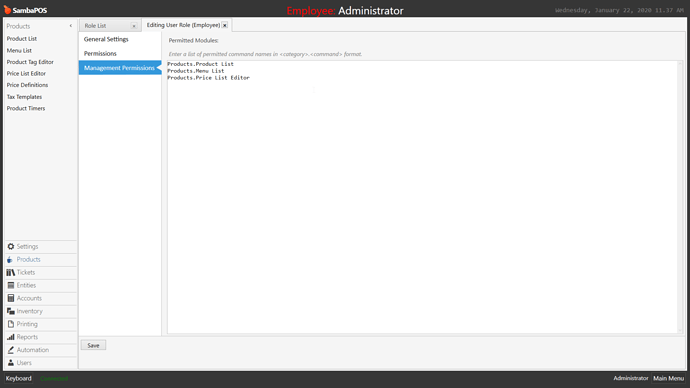 Hi sir, I am sure this will mix up two topics here, however, I need to illustrate what happened now that you have brought up this issue of *limiting the roles of our employees
I have done what you are illustrating above, our manager and supervisor have the right to add a new user and their roles.
At the moment though am unable to restrict lower user role like a supervisor create a higher user role as illustrated in this topic.

If you have staff that will intentionally sabotage your system or look for work around every time they are looking to benefit themselves… I would say this is more of a management issue than a software issue.

I would recommend you to take action and speak to your client about this.

Wow if there is an employee that will go to that length I don’t think there is much you can do until they are took care of.