Saless Reports. Can I not choose the dates?

Am I not able to choose the days on the report? Say I want to know all sales between the 16th of last month and today. I’ve tried changing the dates but the system still showing only sales from this week. Drop down menu doesn’t show much. 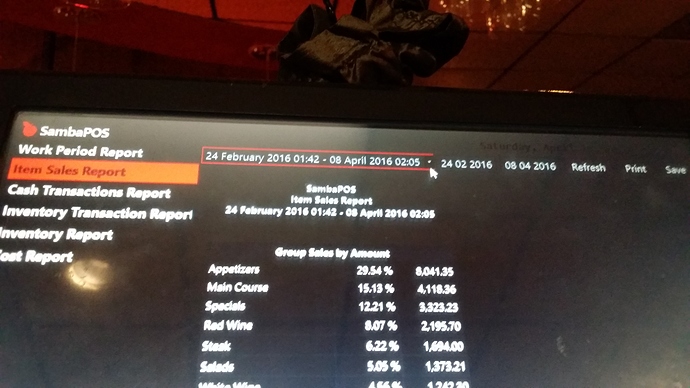 I’ve done that and it won’t change the dates on the reports.

Did this instead of a screenshot. It’s a video.
https://vid.me/Cjr9

Hopefully someone with answer could help you out eventually,

by the way, I’d recommend you use the open source program to capture screenshot to gif instead, It’s free, easier to use, with clearer and more stable video, and no camera is required

An archive of the CodePlex open source hosting site

Dude Nice! I’ll keep that in mind for next time.

Hmm interesting. Could you show me a quick view of your work period Page? The Page that shows start and end work period. Just want to see something from there.

As shaven is getting to, I would hazard a guess your work periods are either not daily or at leave not in line with the dates your searching.

You can press print screen button on your keyboard then press control + v keys when making a post and it will paste the screenshot directly to forum.

You can press print screen button on your keyboard then press control + v keys when making a post and it will paste the screenshot directly to forum.

I know how to post screenshots I just thought a video might would be the easiest way to show you what’s going on.

As both JTRTech and Shivan have mentioned
it’s because I haven’t ended work periods. We’ve never ended work periods or used that feature. Is that something they need to do at the end of every night? We don’t use Samba or the computer for time clocks we have our own system for that. I just don’t see the importance of it. We use SAMBA for POS for sales, not a time clock. I don’t see the importance of this work period thing. Is there no way to disable it?

Work periods has nothing to do with time clocks it’s simply for reporting to set guidelines. Also they allow inventory tracking and corrections

Work Periods aren’t implemented for time clocks. They are there to help manage sales of the day records. When you start and end a work period, a report is generated that gives you a total of sales you made within that period, with a break down of other possibly important information regarding to that sales period.

Time clocks aren’t even built in by default, they can be created within it, but that’s not what work periods are for.

Work Periods are a huge part of sambapos. It acts like a Z report, giving you an insight of your business, but doesn’t wipe the sales data. So ideally speaking, starting and ending work periods on a daily basis would give you a good break down of your sales per day, per week, per month, even per year(if you’ve had it running that long) These reports can also be printed and used for accounting purposes and record keeping purposes of sales of a particular day.

As you can see in the work period report, the information reflects the start and end times of work periods. They are supposed to in a way even remove you from doing manual cash and sales counting as it does all that for you.

So unless you don’t really think having a record of sales per day for your particular business is important, then by all means, you can have a work period running for as long as you want, but the work period report will reflect the start and end of work period.

If you want a separate report to show some of this information in another way, then you may have to create a custom report to do that for you.