Please help. i’m setting up a new database for our second restaurant, and after i installed Samba, and copied our current database from the first restaurant, it gave me this error: 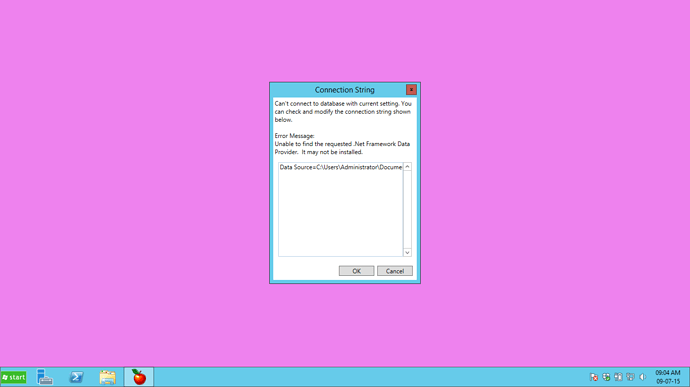 What type of database you use? SQ or Local ?
Have you installed Net Framework 4.5, Microsoft SQLLocalDB, Microsoft SQLServerCompact4.0?
Where do you copy your database?

i installed the SQL Local that is included in the SambaPos installation Package. and i’m using .net Framework 3.5.
i copied it to the folder “SambaPOS V4” in my documents where the .sdf file is stored.

everything seems in order, but still no progress

Have you followed this?

Hi. i have instaled SambaPOS V4 on Windows XP. The only problem is minimum requirements for .Net Framework is 4.5 , but not supported by XP. Any ideas?

I would check on that as you say your running .net 3.5

SQL Local does not use .sdf files… you would need to backup the database and restore it into the new instance. If using multiple terminals its best to install SQL Express and use one single database.

Looks like your running windows xp. If so I am sorry but Samba 4 will not work on xp.

How do i copy a existing Database to a clean installation of V4? with samba V2.99 i would normally only copy the SambaData.sdf file to My Documents, but with V4, no luck. it still gives me the default build in database. i installed SambaPOS V4 without the sample data, and copied the existing Database to My Documents, but still when i launch Samba, it gives me a clean database.

You can’t transfer 2.99 and it be a clean install. You would have to make the rules and actions etc from scratch by looking at old version and recreate in v4.

So the .sdf file won’t work. You installed SQL local. It is highly recommended you recreate it from scratch. Going from 2.99 to 4 could cause some issues. Several rule structures are different specifically custom constraints. .sdf files are for Compact Edition of SQL

you’re misunderstanding my question.
the existing .sdf file that is on my personal laptop is V4 and the workstation is V4 as well.
i want to copy the V4 sdf file from my laptop to the V4 on the workstation at work.
the reason why i’m using V2.99 as an example is because i could easily copy the sdf file from one computer to another computer without hassle with V2.99

An SDF file will not work on a local SQL install. You need to convert it to SQL or reinstall Sambapos with compact edition. Sambapos defaults to localdb SQL now since it’s not limited like CE.