Yes that is probabaly why. We will look at it Rick

Actually we will change the document soon. We have a different place we will put access to licensing.exe in sambapos

Has anything changed with the Payment Sense integration?

AFAIK, this is just the official release of the integration but there aren’t any specific new features per se, except maybe for the currency selection to enable EUR payment for the Republic of Ireland that was previously only released with a beta version.

I have installed the license through the official .exe and restarted SambaPOS several times, but when the program is launched it gives the following error:

Unclosed quotation mark after the character string ‘’. Incorrect syntax near ‘’.
After I click on the OK button, a red popup appears, which states “Unregistered trial version”.

How can I handle it?

Yep I did. The activation was successful

This one on Win Server 2019 instead 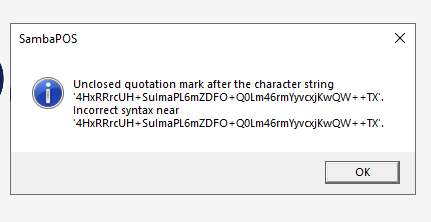 Ok can you plase send db backup to support@sambapos.com. We will check situation.

It has to do with your official business name in cp. remove any special characters from the legal name in cp.sambapos.com try again.

We can control this but likely it will solve it

Tried, it does not work

Sent it now, thank you

Hi @PiroX4256 Can you download SambaPOS 5.5 from same link again. It solves your issue.

This topic was automatically closed 2 days after the last reply. New replies are no longer allowed.