Ok so your just talking about portions… thats what I thought but portion popup was confusing me. No we do not call those modifiers we call them portions. What is commonly called modifiers is Order Tags

Yep was not sure what to call it! As you guys can see Inventory Management is my last frontier so I am still at a basic level. Give it a week should be OK ( or

Looking at your configuration you use order tags but mostly for HH automation. have you tried using them as actual modifiers? Order tags allow an even better fine tuned approach to inventory management.

have you tried using them as actual modifiers

No guilty of no idea about modifiers. Yes the HH & VIP tags was one of the first attempts at digging into automation. I have retained the Tags because my implementation allows for a % to be used for a Product Group - just for those venues that do not wish to type in every price/portion for discounts.

Order tags are the modifiers. Try it.they can be mapped in recipes even.

You can use Order Tags to define modifiers for menu items. With SambaPOS V4 you can define global, product group based or product based order tags. Let’s see how it works. I’ll start by defining Global Modifiers. They will work for all products in my menu. Navigate to Management > Tickets > Order Tags and Add a new order tag group. [image] Just give a name to Order Tag Group here. We’ll see other settings on next topic. Switch to Order Tags page to add your modifiers. [image] … and add a …

@pauln, you are setting it up properly.

I call it the “Modifier Screen” because the screen that appears contains both Portions and Order Tags.

Again, for FAST MENU, I do not want to see the Modifier Screen. I want the Menu Button to choose the Portion automatically. It is much faster when taking orders for “simple” items.

I have no idea if these Costs are correct. But this is the “jist” of using Portions, Recipes, and Price Defs …

Thank you guys - have the 3 superheros by my side, its a great feeling! Great Q, good to know I am on the right track as deadline is looming in 4 weeks.

We also have a back log of orders from other venues as they have found out what we are up to and the features we will provide.

Good on ya! I have recently been approached to possibly become the Tech for a new POS “company” here. Not sure I want to have the extra work though, lol. Between my 2 Venues, Beta Testing, Forum support, etc, it really cuts down on my “social” time

I am using samba version 5.1.58 [DB 124]. I have downloaded and Install wampsever 2.5. I extracted the zipped files above into the “www” folder of the wampsever and edited the connection string as follows; 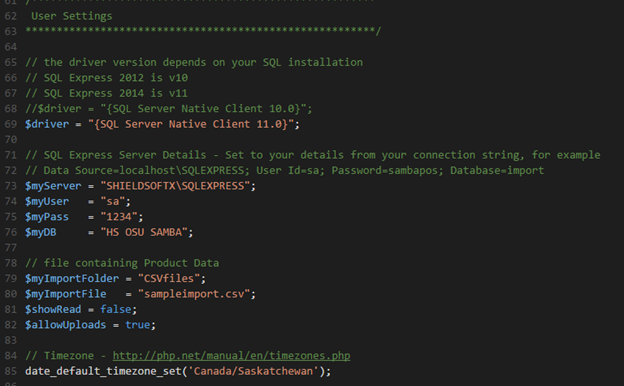 I selected Opera as my browser during wampsever installation, then i tried lunching the interface through Opera with “http://localhost/dbops.php”

This is my result obtained;

I would appreciate help from the forum. Thank You

I have never used wamp but it sounds like you might want to ask wamp forum if you don’t get a response here.

Edit: it looks like your running IIS and it’s probably attached to your port already.

Can you suggest what you use with this import tool so i can try?

I don’t use this tool but I would probably use IIS myself just so I could serve all my various websites projects with one service.

This forum probably won’t help you much with Web server and PHP setup and install because it’s a Samba POS forum so I can’t provide forum links simply because there aren’t any that I know of.

There are some members with more experience with WAMP that might find interest in your question but I wouldn’t wait around. Google wamp server setup see what you can find.

PS read what I said about IIS and your port likely that’s your issue it can’t start because IIS is already using that port.

Kendash is correct. That is an error coming from IIS. I don’t use WAMP myself. I use IIS.

WAMP is “supposed to be” an easy, simple way to get Web Services with PHP up and running on Windows, which is why it is suggested. I tried WAMP a couple times throughout the years, but since IIS is built into Windows, I see no need to install WAMP, which uses Apache as it’s Web Server.

If you really want to use WAMP, you should disable/uninstall IIS. This is done via Add/Remove Programs > Windows Programs.

Here is a link to setting up IIS/PHP that I put together if you want to give that a go instead, since you already have IIS activated …

Any ideas what could be causing this

Well that part was obvious

What characters would be classed as invalid?

I dont know you have not showed us it yet.

Edit: what version of SQL are you using?

the excel file contains over 1700 products so I don’t think anyone is going to check through that.
If i knew what characters are classed as invalid maybe I could search for them.

Is it not showing the line number where it fails?