now i already can setup the 2x rdp. but when we connect it, we just can log in on other account which is sambapos basic(without the setup i already made on admin). how do we connect it? i mean how do we use the same sambapos in admin user but we log in through standar user. Im sorry for bad english. if you understand what i mean…

now i can connect using my android phone. but we cant use the same user on one time right? so how do cashier want to use while the android connecting to it…

now i can connect using my android phone. but we cant use the same user on one time right? so how do cashier want to use while the android connecting to it.

Sorry im not sure what your saying. Your terminology is very vague, are you talking windows accounts (for RDP) or samba users??
To help we need better explanation.

You are using a Single RDP (Remote Desktop Connection) and take with your android the screen over from the computer. The power of Windows RDP Clients is that you run a new session.
Have a look here to understand some more.

Sorry for taking your time jtrtech.

this what happen to me right now. im using 2x remote application server console and i setup a terminal there(i only setup the terminal, am i missing something here?). and then i connect my android using 2x rdp apps on my android to access pc. i can open sambapos using my android but i cant use it on the pc at the same time. im using the android to take order for my restaurant and the pc for cashier. so if i cant use both at the same time, it will be a problem for me…

tomorrow i’ll snap the photo if this is not clear enough as i cant snap it right now because all of the devices are at my restaurant.

thank you… hope you can help me.

Your windows version allows only one 2x Remote Application to connect to PC and does not allows using PC at the same time.

You need to use Windows versions (server editions) that allows multiple connections.

run a new session? do u mean we can setup the 2x application for it make we can use both on the pc and android at the same time on one user account? and can the android send the information to the pc(examples when waiter take orders from customer).

the info you give to me is too big for me to understand it.
thank you for your effort,

i’m using windows 7 ultimate. so there’s no way to fix this except changing the os?

You have to create a second account with login and password on your computer
Lets say User: tablet - password: tablet
Give him admin rights.
Login from your tablet with this user tablet and PW.

Some people remove that limitation for Windows 7 ultimate by running a patch. This thread explains it however as that method considered as a kind of hack we don’t recommend it. We discussed this in every detail on multiple topics. You may find a lot of information by searching forums.

Yes, it can be the same, but I would create a waiter account with less privileges, but for testing purposes just clone the admin account, rename and enter different pw.

I have been trying to setup my sever pc with the above guide but when it comes to the point of restarting the pc after changing settings to auto start message clients i get a error message saying the data string is incorrect.

any help would be greatly apreciated

Have you seent he topic on best this to try when your not sure of the connection string?
loging in to MSSQL manager etc.?

data source= is not valid.

Look at this topic.

Hello All, I have been trying for 3 days to try and get my Client PC (Terminal) to connect to the Server PC. My first problem was that I had 2 firewalls, the router and Kaspersky…these have both been removed of the server PC so both PCs can now ping the ip address of each other. As far as I am aware I have installed the server to the word of all the tutorials yet my client PC still will not connect I keep getting Data Connection String Issue. I Have gone through almost 10 other forum posts a…

this is the server PC not a client connection

Read what I said. If that’s the string then data source= is not valid. Use the database setup option let it build the string.

Sorry I think i missed a step in the instructions Microsoft SQL Express 2012 is installed but i have not configured anything for it is there a tutorial for what needs setting up.

How do I use the database to build the string

If you did a default install of SQL Express without changing anything, then your Instance Name will be SQLEXPRESS.

If you followed the Tutorial on the forum here, it recommends to change the Instance Name to SAMBAPOS.

So your Data Source will be either:

A sure-fire way to know what you connection parameters are, is to use SSMS (SQL Server Management Studio) to attempt a connection to the SQL Service… 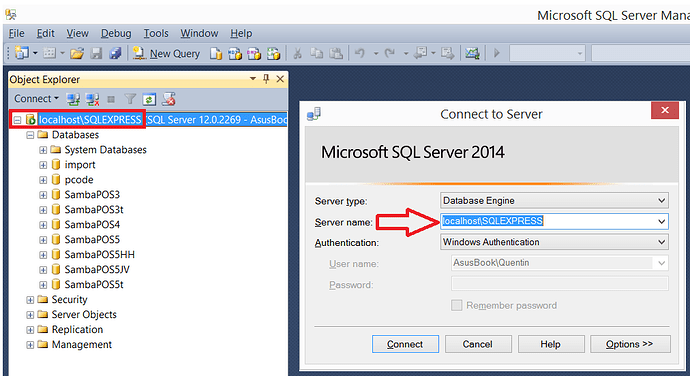 The default installation of SQLServer Express will create an Instance called SQLEXPRESS.

Installing SQL Server Local DB via SambaPOS installation creates an Instance called (localdb)\V11.0. If you installed LocalDB from the SambaPOS setup, you can leave your connection string blank, and it will work.

The LocalDB version of SQL is single-user only. You cannot have multiple terminals using this configuration. To enable multi-terminal operation, you must install SQL Express, since it allows more than 1 connection to the Service at the same time.

The SQL Server Local DB versions do not install as a Service; instead they are simply a Process called sqlservr.exe, which you should see in the Task Manager.

If you are using SQLExpress, the Instance is shown in Services. Ensure it is set to Start Automatically.

If the Service is not shown as Started, then you have an issue with Service Startup in Windows, likely due to the way it is set to start or due to permissions.