I have the following error when trying to run any script in SambaPos.

This does not happen in any of my other PCs.

Can someone please advice what the problem may be? Thanks!!! 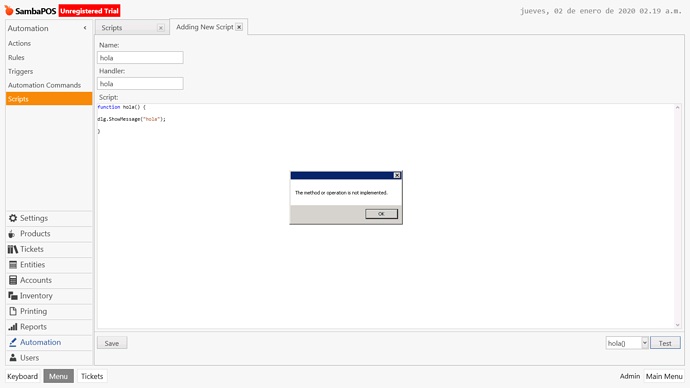 Your in an unregistered trial. These advanced functions likely require a licensed version. Also what version are you running? 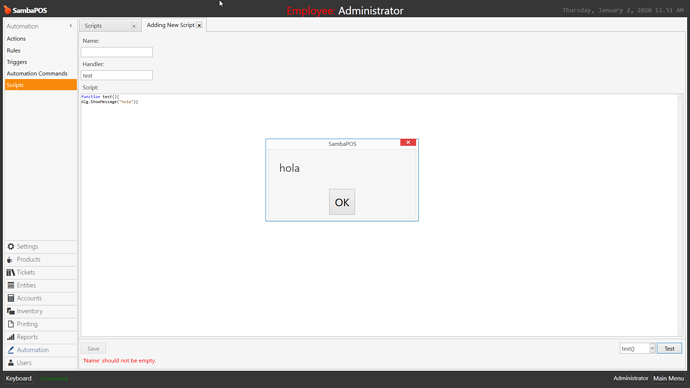 That version does not exist and in your screenshot it shows unregistered. Please try the latest version.

scripting does work in “unregistered trial” on another PC, not this one, anyway i reinstalled windows and its all working now. thanks!

I can see from your original screenshot it looks like you could be using Windows Server? Maybe an older version of Windows Server, like 2008 maybe?

Note this has nothing to do with trial mode…

This was an old post I just found where I posted similar problem before. Unfortunately I didn’t update with the fix but I remember I fixed it

@emre Got an urgent issue, I am installing on a client’s system and none of my scripts will work. I did a test function just returning a value to double check, the same error is returned for all scripts: [image] If a script is run outside the script editor, it will crash SambaPOS. SambaPOS is v5.1.61 using SQL Express 2008 on Windows Server Standard 2008 I am wondering if it is an OS issue, is there any settings I need to configure on Windows Server that might be blocking JScript?

Going by some of the comments I made there, I think you should ensure you have all the latest Windows Updates installed.

@markjw you are correct, indeed that machine has WS2008. I will check about “Windows Scripting Host”