(Self Service )Customer Order food and settle payment at cashier

i would like to setup a separate screen for customer. where customer can place their order (self service) and settle payment at cashier.

so what i was thinking to have a html page on the customer screen and from there send order to the ticket. and the customer should know how much bill he has to pay

any suggestion as to how i should approach this ?

Your major hurdle atm is how the webserver will communicate to SambaPOS for sending orders. That might need @emre help. But I am sure he will need to see much more detail in your plans other than asking community for advice. We have discussed this capability and it started out strong and then conversation stopped. So interest is there but it doesn’t seem a priority.

My feelings are we need something to work similar to how Twitter module works. Or maybe we should design a module thats paid that sets up the webserver and all the specifics for you… however that would require more specific needs so its coded in such a way its not just solving one persons need.

EDIT: your specific need can be met by customizing a terminal for customer use. You can set it up to use specific User that does not allow access to anything else other than Ticket Screen. This would involve a very precise level of fine tuning to ensure you cover all possible issues that might happen if customer uses it wrong.

Considering we can completely replace Menu with automation commands as RickH has shown this might be an option for you.

We have discussed this capability and it started out strong and then conversation stopped.

oops i thought its possible

ya there is a need for integration from webserver to POS

but if i just put the html aside

how else i should approach ? as i want customer to place order, then he should be able to add modifier select portions and see the total price

That is never recommended because if something changes in SambaPOS with how it handles orders with future update it would completely break your setup.

then will a separate department will do ?

Do for what? I think you should study it more before you attempt something like this. It feels like to me you really have no idea where to start and your fishing for people to show you. You should be in opposite and be the one discovering possibilities and then trying them and sharing what works what doesnt and get advice along the way.

Let me give you an example of success story with something.

Lets use Time Clock. For a long time people requested Time Clock in SambaPOS but nobody and I mean NOBODY tried anything or even gave an idea of how they would like to see it work. So other than a request every now and then the conversations never went anywhere.

Me and QmCkay decided you know what lets see if we can do it. We started building it and Emre caught on and started helping us by adding features. Eventually after a month or so we had a working Time Clock.

We actually started putting together various actions, rules, etc and then when we got stuck we thought about what we might need to make it work so we asked Emre. He got some ideas we tried them… some worked some didnt. But we never once just asked emre how do we do this. We just tried it and he helped us along the way.

where to start and your fishing for people to show you.

The point I am trying to make is you really do not have an approach… you just gave the same idea people have asked for…No actual approach mentioned.

When we started Time Clock we were not concerned if our approach was correct we were just determined to get it working. Our approach changed drastically as we progressed.

The custom Navigation screen in V5 was an idea that was VASTLY different than the actual implementation is now. We even drew crude drawings in paint.

My point of that is if you find something your really interested in and you really want it then go for it. Dont worry if your approach is good or not. Once you get going more interest might grow.,

If you wait for the experts to come up with something that they are not interested in, you may be waiting a long while.

ok got your point …this is what i have done 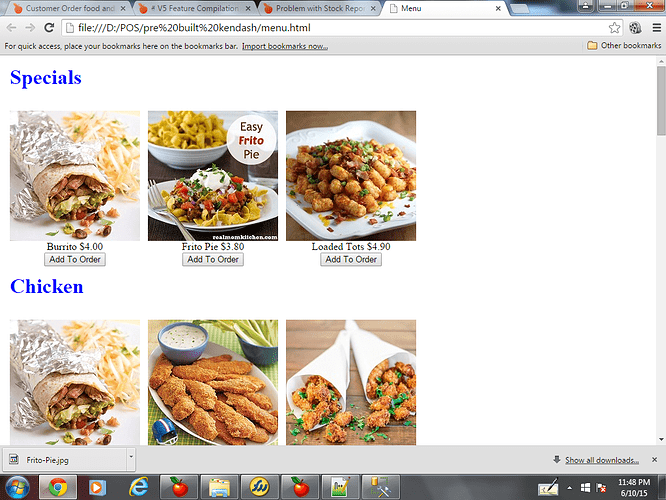 i was going to add this page on the

If you use the HTML Widget you will have more options. You can invoke scripts etc through it. That is a good idea.

Why it has to be HTML? Ticket screen already flexible enough to design something for customer entry.

Sometimes you just have to try things to find that out especially if community isnt very interested.

Why it has to be HTML? Ticket screen already flexible enough to design something for customer entry.

Thats kind of what I am thinking. I mean you can customize every aspect of Ticket Screen now even Menu buttons to be Automation Commands etc.

your specific need can be met by customizing a terminal for customer use. You can set it up to use specific User that does not allow access to anything else other than Ticket Screen. This would involve a very precise level of fine tuning to ensure you cover all possible issues that might happen if customer uses it wrong.

Considering we can completely replace Menu with automation commands as RickH has shown this might be an option for you.

I am trying to allow you to pick what best fits your need not mine since I have no need for it. You need to make that decision what approach you want to use.

thanks for the lecture it had been a long time …

Hope you got the idea. You have great SambaPOS experience and @Jesse trying to help you to use it for community benefit. If you help community, community will help you

If you’re trying to solve a specific customer issue you’re facing and need a ready to use solution, you won’t have much help. If you have coding capabilities you can implement your own solution and sell it to your customers. There are +100 solutions (android apps, online serviecs, etc) built for specific customers and works integrated with SambaPOS. Otherwise the only choice you have is waiting for it to happen

Integrating mobile apps for customer use is already in my plans.

OMG. Missed this post - posted something earlier about self service.

I do like the html idea @madiha think it will be great to alllow customers to order through a customised web page with a gallery of all the dishes on a menu. Even better a linking a full website to sambapos so customers can order over the internet. That would be pretty awesome.