Serious Issue with v5pro, Tickets showing PAID but not in accounts 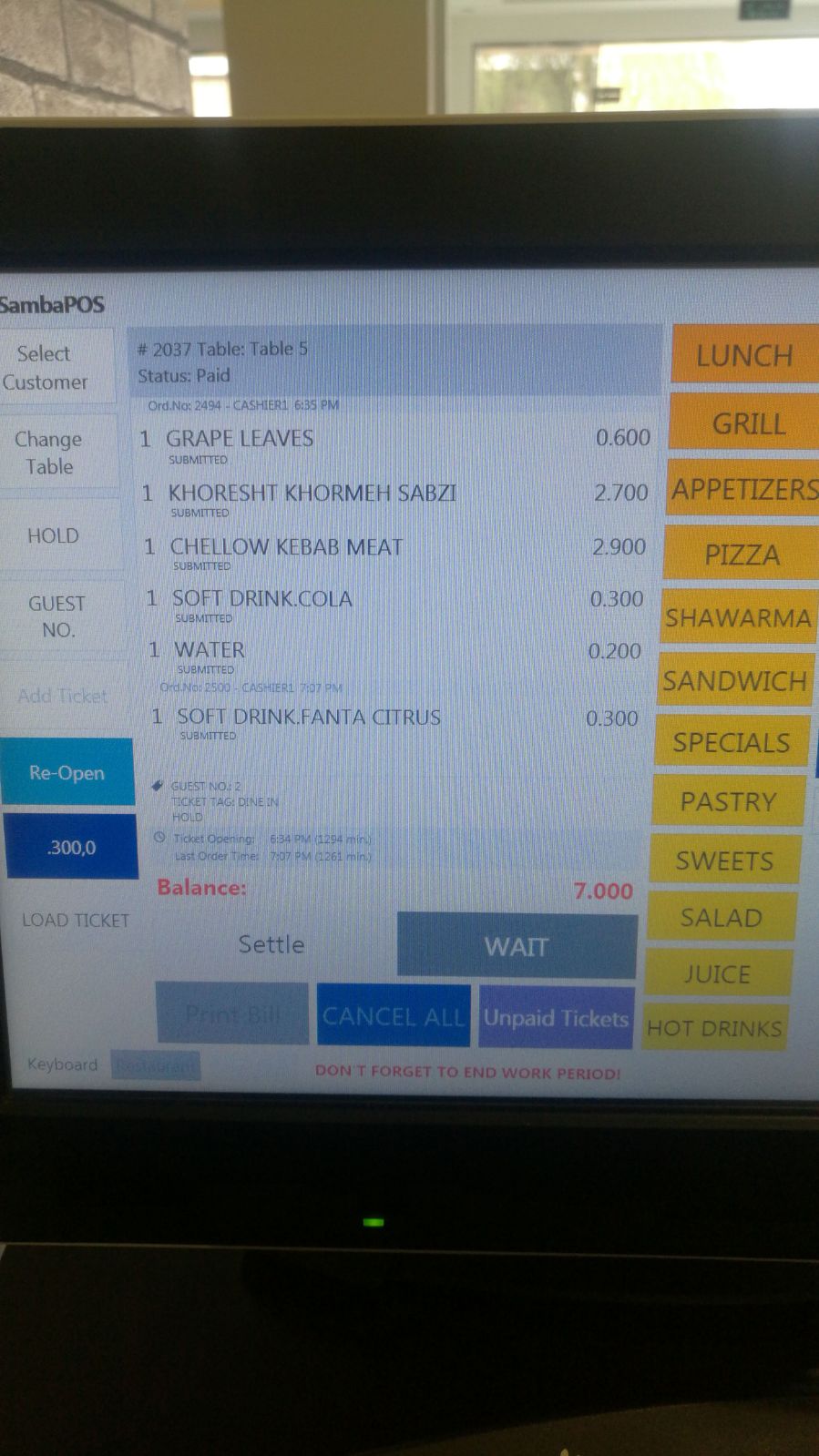 One of my customer is having issue like when they settle the tickets it showing PAID and Print also coming. But after that it is not getting closed and showing the balance amount.
And there is no transaction related to the ticket in the accounts transactions list.

The same system had ticket missing problem. I changed to localdb2014 instead of MSSQL2014 then it was fine.

Highly unlikely this is an Issue at all. If it was an Issue then thousands of people would not be using SambaPOS.

This is very likely a mis-configuration problem. That is, someone did something in Management (Automation) and it broke the system.

BTW, “Paid” is simply a Ticket State and nothing else. It has no bearing whatsoever on whether or not any Transactions have been created.

Your screenshot shows “Status: Paid”, yet the Balance is 7.000, so that means the Ticket “Status” State is being altered/changed before the Balance hits 0. Default Automation handles this properly (ie. Ticket Status Status becomes “Paid” only when Remaining Amount is 0), so something has been changed in Automation to break this default behavior. This is not an Issue; it is mis-configuration.

You need to provide more detail to get any help with this.

after that it is not getting closed and showing the balance amount.

And there is no transaction related to the ticket in the accounts transactions list.

That ticket isn’t paid as it still shows a balance… As q said sounds like the automation is messed up somewhere.
It’s not closing because there is a balance there still.

So what you don’t understand is that both of those are the same database that runs the exact same only difference is one runs as a service (always on) the other runs as a process (shuts down when Sambapos shuts down). Additionally MSSQL2014 supports multiple terminals the latter does not. Anyway switching database types like didn’t fix anything it was something else and it probably got changed at some point.

I got a question though how hard is it to support clients with a system that you don’t understand the basics of how it works?

Not like that , writing mistake:D. I meant to say ticket is not getting closed after payment and still showing the balance amount to pay.

And there is no transaction related to the ticket in the accounts transactions list.

@Jesse
I understood that already,the thing is they were having a POS device, Server PC Core i7 and some software with them. We only changed the software because they were not okay with the previous software.
The pos system is very slow, When the ticket missing issue happened , I found something issue between the SQL Server and Client and I found on one of the forum that ticket missing happens because of connection problem.
Then I assumed that Client POS is having issue with network or something and I changed to LOCALDB2014.

I cannot write the story behind the scenes over here.
Please understand.

payment issue mostly because of the automation misconfiguration,Because I need to check that, I did not do that One new staff did.
But What about the transactions missing and ticket missing.
See I already did the work for 5 POS and 4 tablets in one shop I never had problem like this.

But that will have nothing to do with it, plus if you have a client / server setup, you should not be using LocalDB. It is exactly like @Jesse said, you do not understand the basics of setting this up.

Because I need to check that, I did not do that One new staff did

That is what backup is for, check and compare current setup to the initial one you did (you do have a backup, right??). Clients always will mess with things if they are not properly trained on using the system. Also you should have setup proper user roles.

Why you are offering a paid service to your clients when you don’t even understand the basics is quite shocking, really…

its me Khaleel itself,

The thing u have to understand is I did the work for around 20 clients with sambapos v5 and v4.
So I am sure I know the basics none of the clients complaint about my paid service.
As I told U I did Client server setup first with SQL express but the client POS having issue with network port that’s why I changed to LOCALDB.

That is what backup is for, check and compare current setup to the initial one you did (you do have a backup, right??). Clients always will mess with things if they are not properly trained on using the system. Also you should have setup proper user roles.

Actually am on a tour, after that I will check.

Looking back at your screenshot you have a reopen button!
Are you sure this is confirgured correctly?

Yea it is configured

Transactions don’t just come up missing. Either something is configured wrong or someone is deliberately messing with the system, neither is a sambapos issue. We can’t really help you with what you have told us thus far. We would need to see more screenshot to find out what was configured wrong or to help you figure out what happened.

I will do one thing, I will take the backup of products and entities , then I will restore to new default db , as basic setup then I will check what happens. Anyways thanks for your reply @Jesse

then I will restore to new default db , as basic setup then I will check what happens

I can save you the time - it will work fine if you do that, no need to check! Like you have been told numerous times but appear to ignore, this is not an issue with SambaPOS, it is someone has messed with your setup, either yourself haven’t setup properly, or some staff member at your client’s site. Of course, use default DB again will fix the problem, because the problem is with your setup. But just going back to a default DB and doing all the setup again seems a bit drastic, you are much better to try to find out what has been changed and fix it. Like others have already asked you, post some screenshots. And like I told you before, compare to a backup. Also why do you not have a backup of your setup before giving to a client? If you have, why are you not going down the route I already told you to check the initial setup you did for this client to see if the problem is there. If it isn’t, then you restore to that, tell client they messed with the setup and shouldn’t have, and you fixed it for them by restoring the version you setup originally. Honestly if you are trying to run any sort of business with SambaPOS, you can’t spend time to diagnose problems much when a client has messed something up. I am telling you this as a reseller myself. If someone reports some broken feature, you check the initial setup you did - if it doesn’t reproduce there, then you show them it isn’t on the one you setup and explain someone at their side has broken it. The options I would then give my client is they restore to a previous version before they made the change or restore to the initial one. If they say about lost transactions due to restore, you explain to them that this is what happens when they experiment with things they don’t understand and not take backups beforehand. But really this is also on you, because you should be explaining this sort of things to your clients in the first place!

To add to that also, since there is not the facility to load sections of managment into an entity screen if you wanted to restrict even the customers access to say just products and users you could and then prevent them changing automation settings and account stuff etc - provided your setup is sound there are very few senarios where a business operator will actually need access to these aspects of the program.

I understood everything you explained Thank you @markjw , the thing is you cannot compare this Arab customers with the other customers, their requirements will change whenever they gets new idea.They need the software exactly how they think and they are not ready to wait also.
They don’t care about how much effort is there, So I cannot give a specific setup for all customers.
I can’t even say like its impossible to them. This happened because I was on a tour ,So one of my staff did the setups. Now am trying to take the backups of products and entities.

the thing is you cannot compare this Arab customers with the other customers, their requirements will change whenever they gets new idea.They need the software exactly how they think and they are not ready to wait also.

They don’t care about how much effort is there

I can completely understand, this is caused by the expectations at the start of your relationship with the customer. This is about business and how you present yourself, nothing more. Arab customer or not, it makes no difference, the same type of customer is everywhere. If you give clear expectations and quote at the start, showing exactly what is included, then anything more you charge for. If they don’t like it, then they don’t get. I know these type of customer too, everything is urgent, but really it isn’t they just feel this is the way to control you to get what they want. They come up with idea, great, that new idea costs $xxx more. Don’t want to pay? Then no new idea. Do you really want to work for $0.01 per hour? If you handle customer like this, that is your hourly rate.

If I say this

that new idea costs x about more. Don’t want to pay? Then no new idea.

they will say “Ya Allah baba Khalas take your system and go.

I will check for some other companies.”
We also want survive right.

Usually my customers does not play with management.