I’ve been experimenting with user roles but cannot work out how to set a certain level of restriction.

I want to have the manager have access to all day-to-day features, like adding products, editing menus, inventory, etc., But I only want the admin user to be able to access features that can break the system, like automation, entities, tickets (settings), main settings. I can’t seem to find an easy way to do this, or if it is possible at all? Any help would be much appreciated. Thanks.

Under Users you can give rights to the Navigation screen and options. 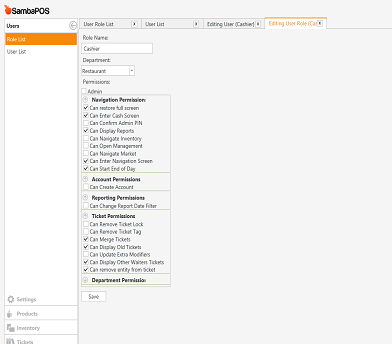 Create users and give them rights when login.

Allot of settings in Samba are mapped to a set of conditions, things like;
Department
Ticket Type
User Role
Ticket Status
Visibility (Location for buttons)

These will define when/where the button with be viable and useable.
If you got to Manager --> Automation --> Automation Commands --> Select Settle Command --> Choose mappings tab you will see, I think by default it will pretty much be mapped to virtually everything with a * in each column.

You would want to change say the user role to ‘Cashier’ if that’s the user role or you could map to only be available on certain terminals.

Its hard to give exact instructions without knowing how you have used users/terminals and other factors in your setup but hope that explains enough for you to understand.

Unfortunately as it stands you cannot set the levels that precisely, you can define access to nav screen (the blue menu) and the options on that screen, ie I have manager access to work period page but not manage.
Manage comes as one access which allows editing of products etc as well as access to automation commands.
Inventory from the warehouse side for incoming inventory/purchases is a separate section…

I have asked about this before as also wanted to allow manager to edit products and menus but not get in to the automation settings but it was taken that there was little demand for this.

@emre I know it has been discussed before but it would be nice if the tabs of the manage section could be defined as part of user rolls if this is possible?

Yeah that’s what I thought.

I’ve had a couple installs where the manager has went in and messed with automation commands, rules, etc., and broke critical functions which we had to then revert to a backup. So would be very valuable feature to be able to lock down the true “admin” features away from curious “manager” users.

've had a couple installs where the manager has went in and messed with automation commands, rules, etc., and broke critical functions which we had to then revert to a backup.

@emre I also agree that it would be awesome if we could lock out atleast automation commands, rules, and such.

I won’t implement that kind of detailed access restrictions soon. However for a quick solution I can hide some specific management sections for non-admin users. For example we can hide Automation, Printing, Users sections. What do you think about it?

I won’t implement that kind of detailed access restrictions soon.

Individual pages is allot of options, perhaps just the main tabs, Settings, Products, Tickets etc
But more detailed would be handy, can think of few examples you might want a manager to get to but not others - Users but not User Rolls to add new staff (but then in theory could change themselves to admin :-/), maybe Entities and Batch editor but not types and screens, order tags but not other ticket settings, products/price list and menu but not price definitions and tax templates.

For example we can hide Automation, Printing, Users sections. What do you think about it?

I would say Automation section should defiantly be able to be hidden for a start to help prevent major problems.

OK I see that won’t solve it nicely. I think I have to take a look for it just after public V5 release. I’ll note that.

For example we can hide Automation, Printing, Users sections. What do you think about it?

Actually, I think this is a great start - hiding/limiting access to sections.

Hi, I totally agree that the Manager should have no access to anything were he can interfere with the code / design settings.
Only admin should have the right to do this.