Setting Up System For a Restaurant? (Adding up 2nd Terminal)

After working on my SambaPos for last couple weeks I am ready to setup my System for my Restaurant.

My Question is that I want to setup 2nd terminal as you can see on the picture
What steps I should follow and What kind of software I need in any of this machines?

I thank you for taking time to look at this post and also lI ike to thank everyone who s in SambaPos Project! 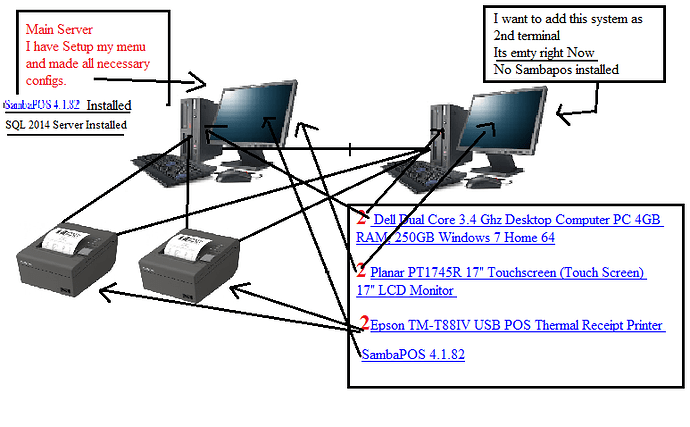 Find many great new & used options and get the best deals for NETGEAR GS108 ProSafe 8-Port 10/100/1000 Mbps Gigabit Desktop Switch at the best online prices at eBay! Free shipping for many products!

Find many great new & used options and get the best deals for Epson Ub-e03 Ethernet Interface C32C824541 at the best online prices at eBay! Free shipping for many products!

If your really trying to save money you could install printers on one of the stations and share them to the other through windows features but I would really try to get those ethernet modules above.

Also keep me posted on your experience with planar, im currently only using elo but considering planar.
@kadymp

@Hasa I appreciated for you taking your important time and helping me.

I bought 2 planar 17" touchscreen monitors and they are both really good to use I can say. I don’t know too much about touch screens, so they are working for me just fine. I would recommend them to you.

Thanks once again for all your super help.

here are the both computers data connection string @Hasa 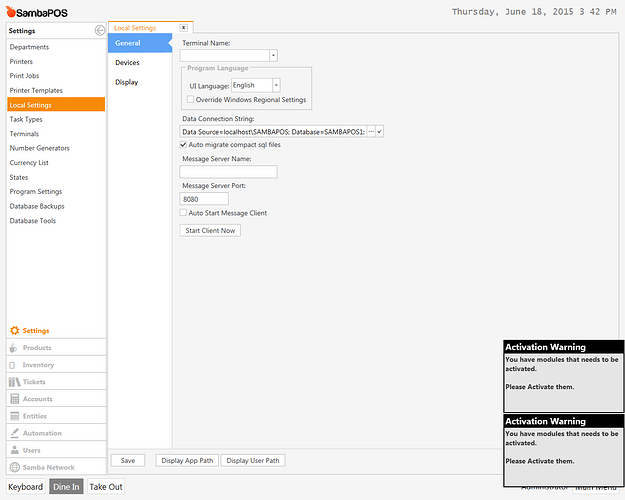 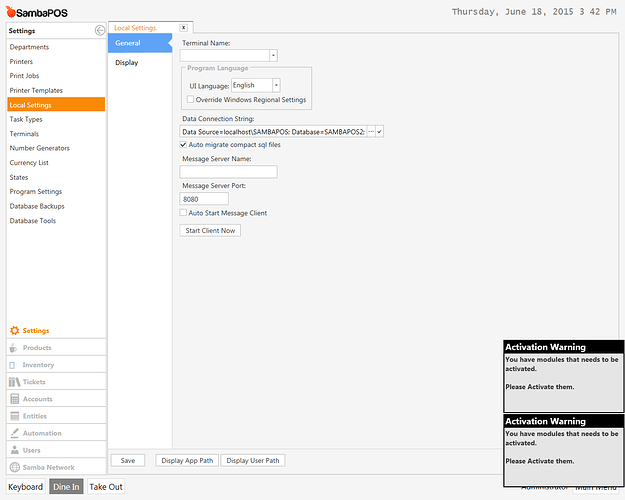 what step I need to take now?

When I do that I will get connection string error what do I need to do order to not get an error? @Jesse

I can read your language somewhat but you may get a lot more help from us if you could bring us into the conversation as well as @emre.

I have follow all of the steps I have MySQL installed in both computers, both computers have same SambaPos versions with same backups I have changed the local settings as the main computer and seems like its ok because I don’t get any error messages. now when I go network setup I see both computers are attached and I have connect both computers in same network with using Ethernet cables I don’t think I was successful to add my 2nd terminal to the main because when I make order on main computer nothing changes on the 2nd terminal I am trying to add and when I do reports I cant see 2nd terminal on my report

What I am doing wrong?

Your connection string needs to be the same on both computers. If you still have it like you showed in the screenshots then its because your second terminal is connected to a different database. Make sure SQL Server Browser service is running on the server and also disable all firewalls.

I have attached screenshots from both computers

Here is the Main computer screenshots 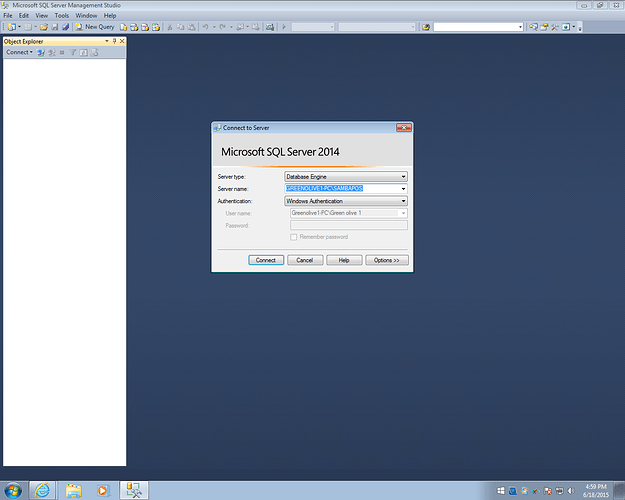 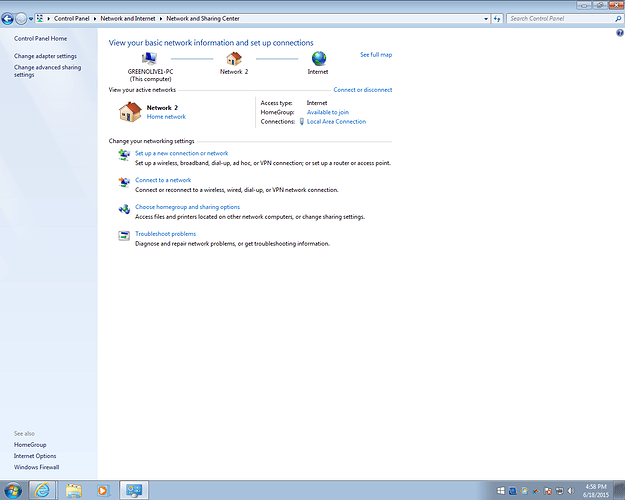 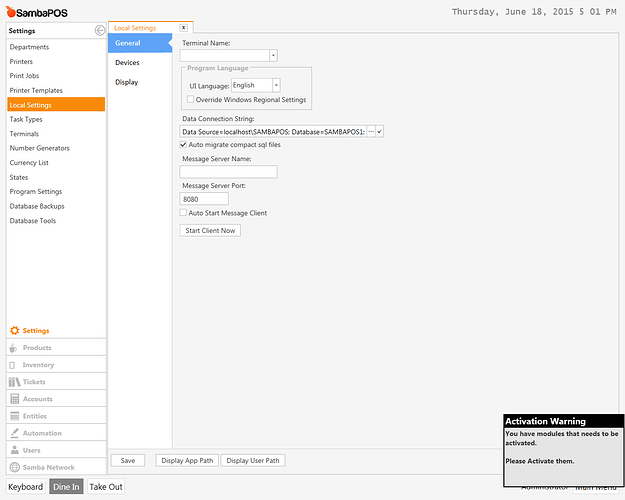 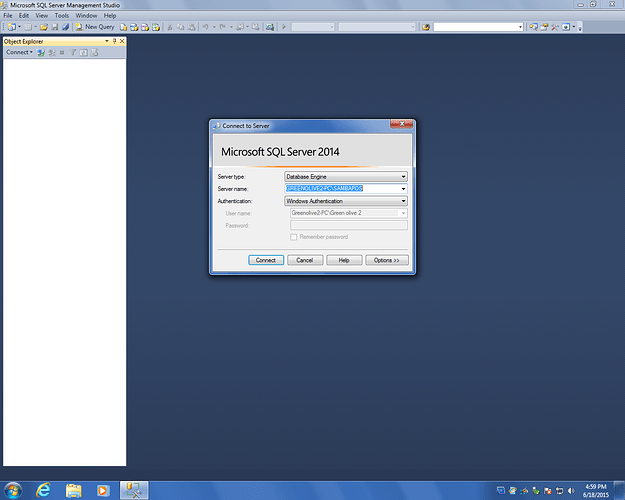 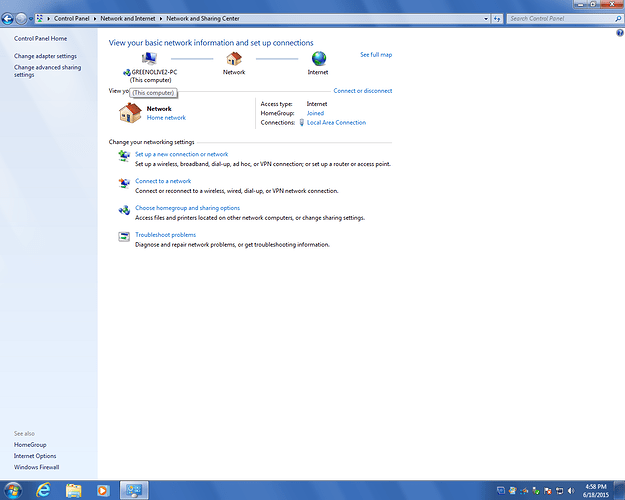 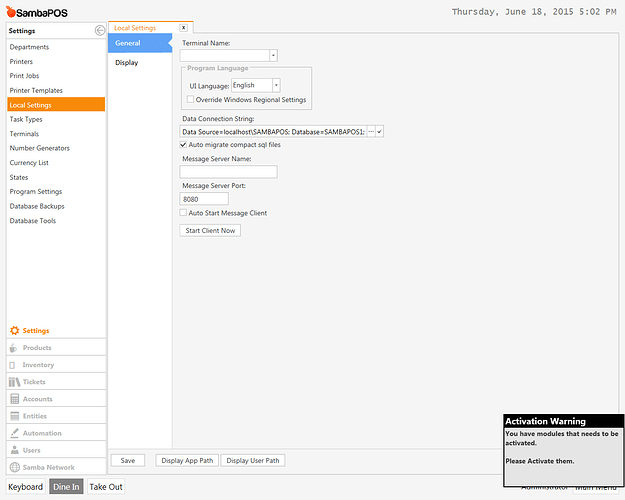 they are also both running on multi user mode

You only install SQL server on one computer not both. The second terminal connects to the SQL Server.

so should I uninstall MySQL on second computer?

It does not use MySQL you should uninstall SQL Express on the 2nd computer and your connection string would be:

Replace Servers Computer Name with whatever the computer name is for the main server that has SQL Server installed on.

PS. the tutorial explains all of this if you read it carefully.

Hi, personally with the Ethernet setup of the Pos printers I would go with 2x 4 port switches as you do not have to lay as many cables.

For example go with the 8 ports little brother Netgear GS105 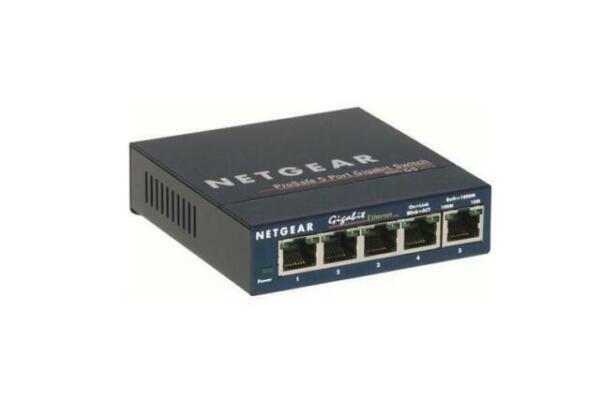 Find many great new & used options and get the best deals for NETGEAR ProSafe GS105 5-port Gigabit Desktop Switch 10/100/1000 Mbps at the best online prices at eBay! Free shipping for many products!

Good point but that would depend on his layout.

Management Console screenshots shows the server names. Instead of localhost\SAMBAPOS you need to configure Data Source as GREENOLIVE1-PC\SAMBAPOS or as the other one.