Slow switch between categories, products with images. What is best procedure

I especially notice it switching to spirits, also spirits has the most items , hence the most images.

What is the best (fastest) file format to use ?
should the image be local to each POS ? or mapped network drive - currently local

Local will generally be faster.

What is a tipial file size? Have you been reducing the image size to as close to 1:1 with how bit it will be on screen?

You would unlikely want an image to bigger than say 100-200 pixels wide but then that depends on how big your buttons are.

Have you just take full size images off google and used them?

With the Atom processor you may want to ensure your image sizes are kept small and local.

Hello, I took the images off google, opened them and reduced size and used the snip tool to make jpeg. 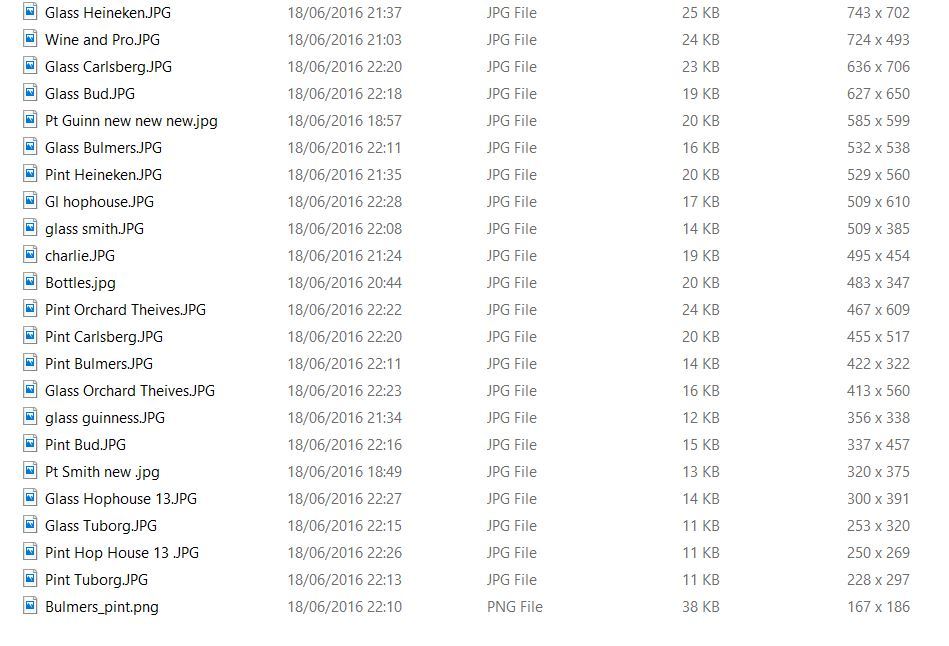 My method is rather crude

Thank you for your fast response. That is good to know, I will keep the files local.
I have another question, if you do not mind.

As i am using a server MS SQL 2014 express with 3 terminals, when i add a picture to a product, the path is the same for each of my terminals, is this normal ?

Ie I do not appear to have the ability to specify a unique path for each terminal.
Its not an issue really as i have used dropbox on each POS for the data and a batch file "SUBST i: “C:\Users\Public.DESKTOP-80CAERL\Dropbox\POSimages” " so all the images are in the same i: drive and it appears to be working ok on all terminals , aside from the slight latency.

Ie I do not appear to have the ability to specify a unique path for each terminal.

Remember that most of that information is stored in the database so it will store as a single String and all 3 terminals access that.

PS: A good location for images is your SambaPOS images folder located in C:\Program Files (x86)\SambaPOS5\Images\

Networked drives work great but of course your slave to network congestion and throughput. Local images typically will always be faster.

Is this a locally synced folder or shortcut to remote folder?

The best location is what kendash said above. There are many directories which will be the same on each terminal if you come out of the users folder. Permissions is then the obsical but you can give sql/samba permissions to folders or use ones - like above - which already have.

its a local folder in dropbox.

I have a batch file pos.bat that starts up with pc

one line in it - the path to the folder in dropbox
SUBST i: “C:\Users\Public.DESKTOP-80CAERL\Dropbox\POSimages”

Then all i need do is specify the image path for each product as i:\name of image.jpg

So i just put the images in my drop box on the server when adding products and they get automatically send to all the terminals and that way the path is always the same. I do not need to go near any of the terminals as their image files are always up to date - I am so lazy

If the resources required to run drop box become an issue on the clients, I will prob just share the folders on all the terminals and have a sync util on the server perform the update.

New to this, so I am not sure best procedures.

is jpeg best ? would png or some other format be faster ?

I personally prefer PNG but deal more with vector images for printing and usually come out better in PNG.
I dont know if Samba has a preference but the logo on the login screen is PNG so to me would make sense to use PNG but dont see reason JPG/PNG would cause lag unless samba is rendering somehow but doubt it.

I doubt dropbox itself would effect samba but the bat file thing… never done that myself so not sure on what it entails.

If it comes to changing directory and you have lots of images there will likely be an easy way to 'find and replace ‘i:’ with new directory, if not using SQL pretty sure it would be a fairly simple script to put together.

Thank you all for all the data, I will implement your suggestions and reply back with what works best.