i create the StayGo button from this tutorial

how can i print WiFi pasword only on Stay Tickets.

I tried following this tutorial

Hi, I run a cafe and provide free internet wi-fi access to my customers. However - I would want to do that only if they bill above a certain value say 100 rupees (Indian currency). Is there a way with which I can: a) Print the wi-fi router password on the customers bill/ticket copy b) And - also can i limit this printing only to conditions when the customers bill value is above Rupees 100… Kindly help me with this. Thanks, Ashwin

This Tutorial aims to provide a simple method to change the WiFi Access Password, and save the Password within SambaPOS so that we may use it for Display or Printing purposes. ::::: SETUP Begin :::::::::::::::::::: Automation Command - WiFiPW Update [image] Automation Command can be mapped as a button (i.e. to the Ticket screen), or no mapping is necessary if you want to place it on an Entity Screen or Account Screen. Name: AU WiFiPW Update Button Header: Change WiFi ))) Mappings: (choos…

but i can figure out what’s wrong can anyone please help me ?

I thing the problem is in the rules 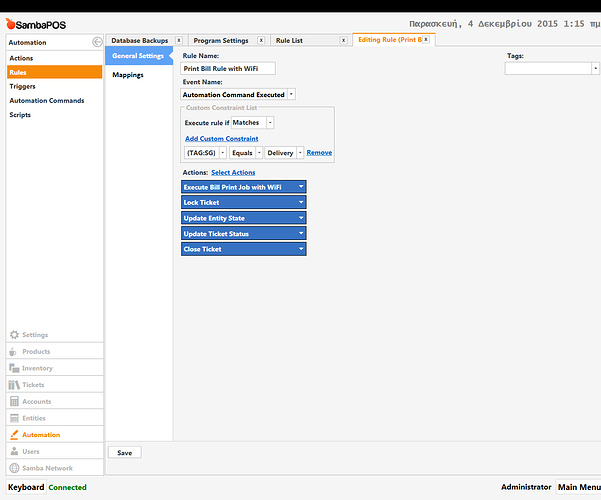 Do you have another bill print on payment processed event rule elsewhere?
If it were me I’d have one payment processed rule with the two print bill actions but do the constraints within the action dropdown.
Both actions on one rule.
One action with {TICKET TAG:X} == YY on one and != on the other.
Does not equal as a back to be sure a bill is printed either way encase a rag isn’t set. 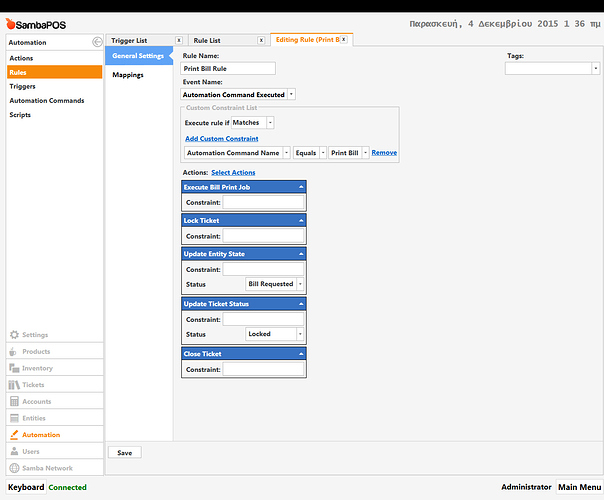 i’m confused a little bit can you explain it to me ?

I can only explain in words as not at PC.

I presume at the minute you get the non wifi template every time right?

In the add actions popup drag the ‘with wifi’ action to be below the existing print bill rule.

You will then want to constrain the individual actions rather than the whole rule (this is just my preferred method, the alternative is to have two identical [exc print job action] but add second constraint on each but I prefer one rule as your only really wanting to constrain the one action, the others are the same for both)

If you confirm your in or Togo tag name I’ll tell you the exact constraints to put.
If you do the above but without constraints for now you should as it stands get two prints, one without and one with the wifi code.