I use Samba with my two Android using the rdp and I feel good, but on my smaller device I have difficulty both in the scroll of the products (can you improve?) and in the click on the various buttons.

If you magnify the buttons then come out great even to the PC or other device bigger and does not fit. There should be a way (as in the responsive websites) to have various sizes of the buttons according to the resolution of the device.

I am also referring to the buttons automation (NOT ONLY TO THOSE OF THE MENU). Is there a way to enlarge them? And to change the text? For example, “Add order” only appears on the device, or when I resize Samba on your computer. How can I change the word “Add order” in the same way as I have changed the text of the other buttons going from “Automation> Automation commands”?

And the “Ticket notes”? How do I magnify? How do I change the text? And so for “Change table” and “Select customer”?

Another great thing would be to have the button “Close” little bit bigger on my android, the “Close” button to close the menu and return to the ticket before the second “Close” larger.

Same thing for the button “Modify order” always in Android.

In the “Ticket” when I click on a product and then click on “Change price” in Android gives me an error saying that I must first enter a new price, but where I type in Android? 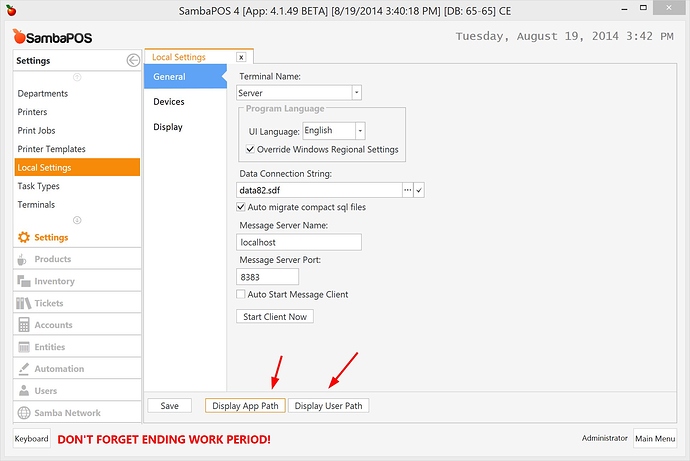 You can read more about it at the end of this tutorial. 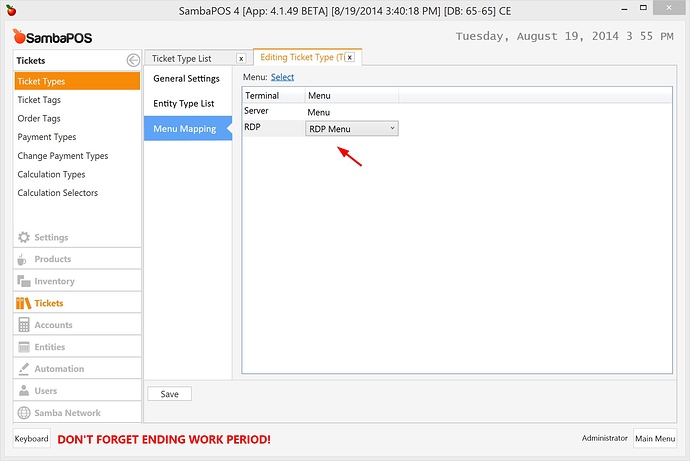 Unfortunately buttons you’ve mentioned are not configurable but since you have windows user account based local settings you can adjust screen zoom level for better view.

All understood. Thank you.

But I need bigger buttons on RDP, not in Windows!

Those buttons will become possible to enlarge it in 4.1.50? Please…

Can you post a photo of your device screen while it displays these buttons so we can understand what do you mean with small and what do want to enlarge (eg. width or font size)

I need to enlarge width and height of buttons, not only font size.

And then: the scrolling. Now I have to press for about one second and then I can scroll with touch (i’m using 2x client). There is a way for scroll like an app without long press on screen before touch scroll?

Any news for width and height of system buttons? This is a feature very grateful to those who use samba in rdp.

Any news for width and height of system buttons? This is a feature very grateful to those who use samba in rdp.

If you could post a screenshot and highlight what you would like to see it would help him better. If he simply makes them bigger it could impact other devices that display them differently.

Me personally on my RDP devices the buttons are just fine. I do not have any issues with them. And making them bigger would negatively impact my experience.

If you posted a screenshot of your device he might be able to customize a view for that device’s resolution… vs just making them bigger. 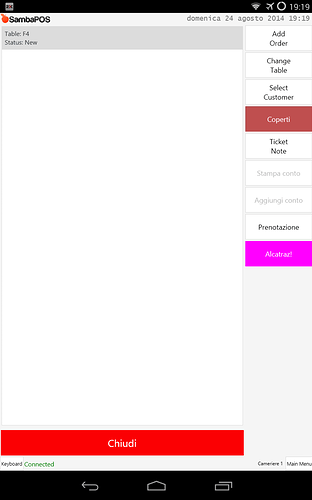 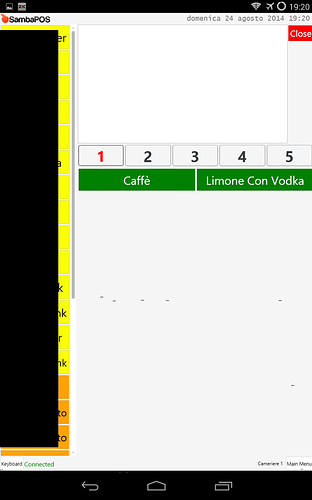 Fin image one the buttons are the ones on right. Are too small for my fingers. And in the second photo I am referring to the similar button that is always on, contact, red, where it says “Close.”

I hope now the problem is more clear.

What size is your device? What screen size?

Ok so 7" and 4.8" devices. All of that information helps @emre understand your issue. I am sure he can do some scaling magic for it.

My personal opinion is devices that get much smaller than 7" are just not big enough to make a good experience even if you scale the buttons bigger. At some point you would need to scroll and more scrolling = more time. But that’s just my opinion.

The Scroll is a BIG BIG BIG PROBLEM. For the first MENU on the left and for the menu on the right (yellow one and green one).

What I was trying to say is. Your experience may not get any better on a screen size that small no matter what @emre does. But I hope maybe he can find a resolution for you

Can you try increasing screen zoom? You can do it from local settings > display > window scale or zoom. Sorry I’m mobile.

I tried but is not what i want because everything zoom in except (or very little compared to what I would) the buttons that I asked you to enlarge.

Any news here for buttons height?