Spec Reconmendations and SSD vs HDD

OK, I know specs have been discussed a few times.

I am specing up for the hotel system Ive mentioned before and am looking at if SSD is worth it.
When I say worth it as meany will have read when looking at using SSD one concern which comes up often is the high rewrite on drive associated with SQL.
As the machine will be dedicated samba SQL server and no other windows features will be used which arent samba related I was thinking I would rather have 2x 120GB in RAID1 rather than a single larger drive and although budget is more flexible that previous projects obviously still want to keep the cost to a respectable level and as it will only be for samba space requirement will not be huge.
I know performance should be greatly improved with SSD but is the write limit still something to be concerned about as research suggests this is less of an issue now SSD tech had improved.
Just looking for experiences of people?

The drives im looking at are Kingston 120GB 450MB read/write drives.
120GB should be enough for a dedicated Samba SQL server shouldn’t it? or at least Enough space for the foreseeable future.
Backups will be configured to a networked file server.

Also if you had a choice of CPU power vs RAM which would be more beneficial, am taking i3 vs i5 and 8GB vs 16GB RAM or do both options give enough spec to give good performance?

The setup will only be 3 main till terminals with 2 office pcs with samba (but thats mainly for programing/reporting not hard pos use) at first but with plans for expansion to 4-5 tablets (undecided on windows tablets to ipads to multiple dedicated RDP machines, windows tablets obviously simpler but boss likes idea and look of ipads)
Terminal/till machines will be my usual trusted Core2Duo SFF PCs (3Ghz E8500 I think, 4Gb RAM possibly 60GB SSD if budget allows after specing server)

@markjw you always seem to be very clear with hardware.

That write limit is really miniscule now days. The cost of them is going down so much even using SSD in a failsafe RAID setup is really nice option. There are even higher performing PCI Slot SSD solutions with extreme performance over your typical SATA variety.

The SSDs really make a huge difference in that they do not lag ever. I cannot stress this enough - go with SSD! Do RAID1 if you’re paranoid - it won’t hurt. The 120GB is plenty of space, and backup is mirrored to 3TB NAS. The 8GB vs 4GB is a bit moot, but more headroom helps in that paging never happens. You will not need 16GB.

I run SambaPOS, music, 5 websites and a multi-domain email server on that little guy, with no hiccups at all, and it barely approaches 4GB RAM usage, and the tiny i3 CPU is bored most of the time.

The only thing I do not like is that these little guys get hot. I changed the bios to engage the fan to max RPM at a lower temp, and I also keep a small fan blowing on it. I mounted it vertically under the counter with the included bracket.

If I were in need of another system, I would go for:

I really doubt I would see any noticeable gain going from i3 to i5, but the i5 is a much better chip on paper.

We’ve been selling SSD based all in one touch POS terminals for a couple years now and never had any problems. They are generally 32Gb mSATA SSDs so don’t give the same level of performance as standard SSDs but still run faster than using HDD. I don’t think you will run into any issues with high rewrite, I’ve been using SSDs on development machines now for a few years where we use SQL server for SambaPOS plus many other things.

and I also keep a small fan blowing on it.

Hey @QMcKay - great idea! It gets hot here in Perth so I tried your idea, what do you think? 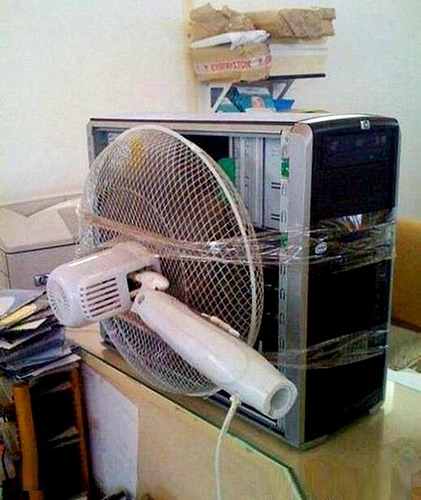 There was so many catchya lines I was going to use, but thought better about most.
Just doing my morning blog reads…

I think it is perfect @pauln . Simple, yet effective, and does a better job than a regular computer case fan. Probably costs less too…

Sorry Q (& JLT) - cracking a sensible thread! I get a little bit silly when I pass the point of being overtired so excuse me please.
Anyway it is the season to be Jolly…

great idea! It gets hot here in Perth so I tried your idea, what do you think? 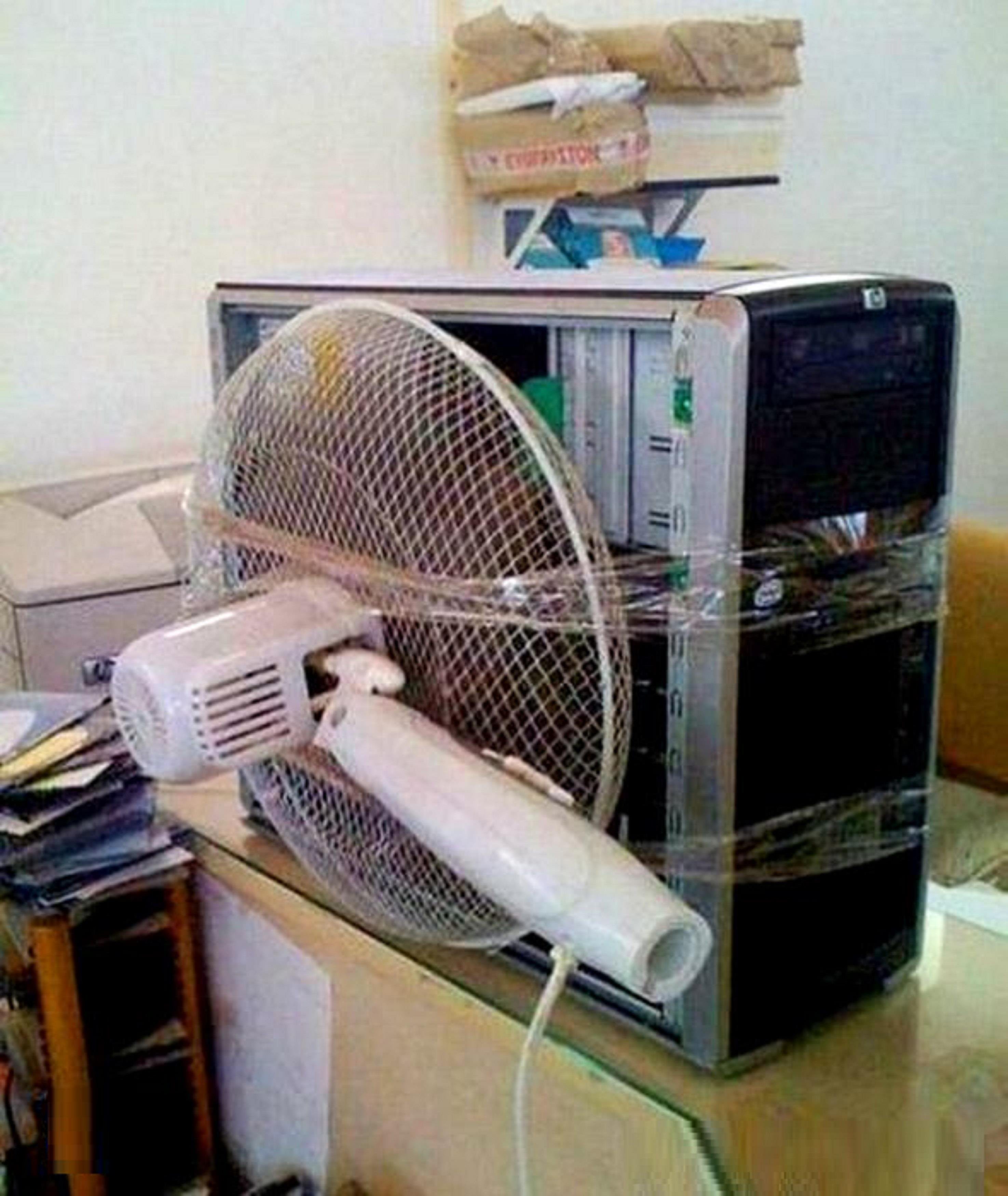 im missing the pun there? what have I done this time lol

It’s ok, @JTRTech, I don’t get it either. Language barrier?

SambaPOS runs really well on SSD. Make sure you configure backups and configure two computers with SQL Express. Use computer one as production system. Computer two should be your backup system. If computer one fails, restore SambaPOS to computer two and change your DB Connection String. This can be done in 10 minutes and it is painless.

There is no need to RAID. If you build a system with RAID, you need to buy a hardware RAID card.

Software RAID(fake RAID) has horriable performance. Typical SSD rights are around 500MB/s. If you use software RAID, the same SSD rights will drop to 50-100MB/s.

im missing the pun there? what have I done this time lol

It’s ok, @JTRTech, I don’t get it either. Language barrier?

haha, nobody really get it? Doesn’t JScript solutions sounds like “workaround” for some cases? I see I worded my joke badly…

Doesn’t JScript solutions sounds like “workaround” for some cases?

This is what I went for in the end.

Really like these machines, very tidy and compact at less than 30cm x 30cm x 10cm.

I use the Dell USFF 780s (3Ghz C2D 4GB 60GB SSD) for the tills themselves which are tiny and these machines aren’t much bigger. Went for the SFF for space to have two SSD in 3.5 bay and to match the other servers at hotel.
File Server, Till Server, Network Manager/Firewall + Spare machine
Opted to get 4 identical models with a spare to make any maintenance in the future easier.

Also plan to have a look at some form of backup SQL on the file server machine so should any maintenance be required or any issues on epos sever the file server can pretty easily stand in temporarily. 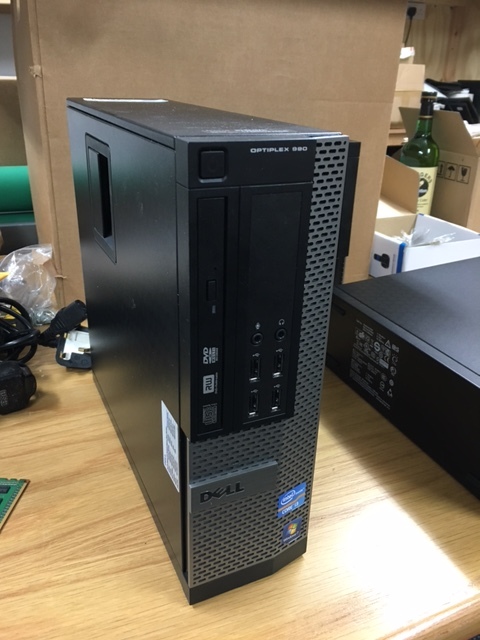 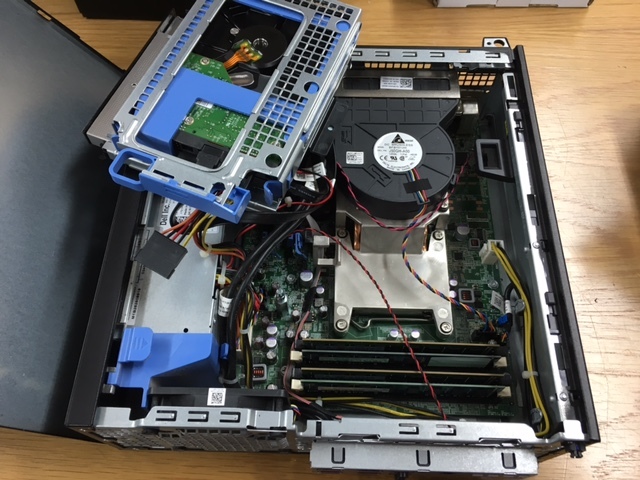