I am planning to update my SambaPOS system, and I’ll take that opportunity to rationalize the ressources, better for my electricity bill and easier for my UPS - we experience almost daily power failure.

Right now I have max 4 waitresses working together and 4 computers.

Now, the next step is to install the last SambaPOS5 database onto the mssql 2019 server.
Is there such a sql script available?

When properly configured, the SambaPOS desktop application will automatically create the database and populate it with default data. From there you can restore a backup.

yes, that was my idea if not script exists.
Installing win10, sql server 2019, installing sambapos, and … finally “copy/paste” SambaPOS5" to mssql 2019 on debian.

Gotcha. What version of SambaPOS are you using? I should be able to generate the create scripts for you.

The last one, the one of today.
Does sambapos “ask” the location of mssql server during installation? I don’t remember, I don’t think so. 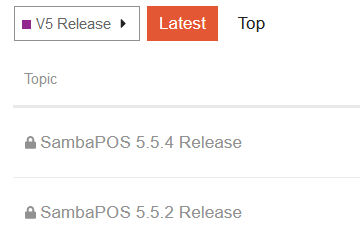 But I’ll get you the 5.5.4 schema and default data and SambaPOS can update the db if needed.

trying now!
OK, I created a new database SambaPOS5 on mssql on debian and run your script:

I’ll now install the latest version of samba pos and try to connect to that database, I’ll let you know, thanks a lot.

Latest sambapos is 5.5.6 we released yesterday. No release notes yet.

Ok, it turned out that my question was irrelevant.

I don’t need the SambaPOS5 database creation script at all.

Like on a full-windows install, I just need to install Sambapos on one fresh windows, enter and configure the connection string (for the first time), and the next time I start SambaPOS, it will create SambaPOS5 database if it does not exist.
The fact that mssql runs on debian has no impact.

I just need to install Sambapos on one fresh windows,

I had kind of thought so, but who knows lol

Message server can run on any of your windows clients. I’m not sure if it’ll run under WINE. The backups may be more of a sticky wicket.

When I enter /path/to/somthing in the application it is converted to a full path string. The same happens if I modify the settings file directly:

The path is passed to the db engine so it’ll need to be a relative path on the db server.