Hello everyone, I have a little problem with V5 database connection.

I installed everything exactly as in http://www.sambapos.org/en/content/installing-sql-express-2012-sambapos-v3

But connection failed on the V5 client.

V4 Client connect successfully but tell me I need a version check.

I wonder if you know about this issue and pass it somehow?

Check that you have opened appropriate ports on your servers firewall for sql server, and enabled tcp as the client connection protocol.

As I mention above, V4 client connect successfully which means I have no problem with port forwarding… I’m really stuck here.

It’s so strange now kendash, this morning, when I’m trying to take a screensnap for you. V4 runs as expected. But, also the V5. I don’t know what is going on here. I’ll get back with more detail if I can find it out. I’m so sorry for he trouble.

I know you have it running already but here is the new tutorial for setting up SambaPOS SQL Express.

. I don’t know what is going on here.

Is there any big difference between 2012 vs 2014’s performance? I will probably change to 2014 if things get faster and more stable.

I cant say if there is a difference but I have ran 2014 for quite a long while now and it runs just fine. Its best to stay with current software for security updates and life cycle support. SambaPOS is a very small footprint as far as database is concerned so likely you wont feel a difference in speed.

Here is an article that might explain some benefits: 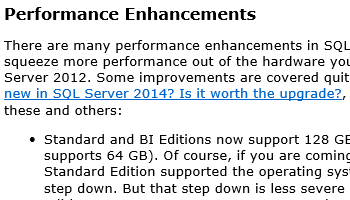 With SQL Server 2008 and SQL Server 2008 R2 both reaching end of mainstream support in mid-2014, many customers will be looking to migrate to a newer edition rather than purchase extended support or continue unsupported. Currently, their choices are...

I know you have it running already but here is the new tutorial for setting up SambaPOS SQL Express.

But that said; I say for SambaPOS V5 go for SQL Express (xxxx) not SQL server

Just my opinion: For really big Databases you should use SQL Server (If you really need Windows), but if you would like to improve SambaPOS preformance don’t invest money in SQL Server invest in a proper Solid State Disk (But that goes for about any PC still running on classic harddrives) and just go for SQL Express.

Ps. I have unused SQL Server licences myself, and i still go for SQL Express

Can’t see anything on vs Google about number of connections.
Differences I can see are how much ram and cores can be used with reviews pointing to the biggest difference being the max database size BUT with SQL express offering 10GB max size… Well if you can fill 10GB of database with samba alone I’ll buy you a server licence :-p
I won’t really but would be shocked if you can hit 10GB and would like to know how that is even posible… Maybe after 100 years of transactions LOL

You’re right, i’m mixing up some products it was the Database size what was the main limitaion.
I shouldn’t have been lazy then my reply would have made sense