Anyone has installed Star TSP 100 in Win 10 lately?

I went to www.starmicronics.com and downloaded the driver TSP 100 v710_lite and the other full version

During the installation, it has an error
Error 1935 …

What to do? Do you guys run a different driver or different OS?

It may be a DirectX issue. Will be checking how to reinstall that part to see whether it solves the problem

try downloading the drivers from below link. i’m using following drivers under Windows 10 without any issues. 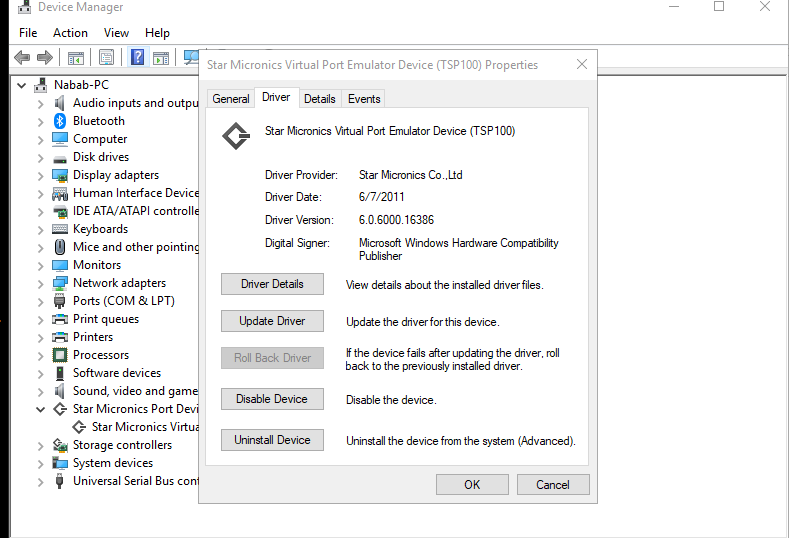 It looks like I have to at least install the UT before I can assign any changes to the machine. The dip switch does not have any relations to the printer modes.

Use another pc with older windows?

I will try the virtual port method but I have to get back to the site to do that as the virtual emulator can only be found with driver-update-software as well. Life is not treating me nice. If not my friend has to keep the Square POS as well, I would have told him to just swap out the printers. Spent two trips already. Yesterday took me 3 hours to get there which normally is only 45min. New York City is horrible with traffic.

I have TSP100 installed on many Windows 10 computers without an issue. Change your USB cable or reinstall Windows.

Can you explain your procedures to see whether there is any
difference in our steps. We are using them as IP printers.

Are you downloading correct driver? I think, it is TSP143LAN, but I am not in front of a computer to confirm. Also go to Programs->Star to create printer queue and assign IP address.

I selected the model base on the sticker on my machine and the website Starmicronics.com. The website seems to be providing an unify version of the installer and name it something for TSP 100 v710a or lite. I think I am stuck at the installer using outdated Direct X which does not come with the DL. The proper Direct X and driver may come in the original CD but since I am trying to salvage a Square POS setup in the bar, the CD must have been long gone.

DirectX has nothing to do with printer drivers or installers, it’s for graphics and usually only mentioned related to gaming. I think you are thinking of .net framework?

If it’s a .net framework issue, then make sure you update to the version mentioned on the installer. If it’s 3.5 there is an option to enable that in optional windows features in control panel.

Also, Star is a large company who sell thousands of printers, there is no way their drivers for printers currently being sold do not work with Windows 10. Just make sure you are downloading the correct drivers.

The only difference you sometimes have to make with Star printers is to turn on ESC/POS mode because by default they tend to be set to use the Star command set instead. There is a utility to make the change, I don’t use Star printers but I remember doing this before. It is mentioned on the forum before somewhere as well.

The reason why I mention DirectX is because about a year ago in another PC of mine where I tested a Star printer has an error message that says DirectPlay required during installation. After the DirectPlay is updated, the printer start to work. I cannot remember the exact model but the printer, features of the printer and installer look almost the same as this case.

BTW, you could right in that it is a matter of .NET, I will check the direction as well when I get to the site.

Directplay was deprecated quite a while ago.

Problem solved.
Manually browses the directory of the downloaded files, found a copy of printer driver, manually install it. Did not try to install other utilities as the installer still will stop in the middle of installation in this new machine I am using for my friend’s bar.

I try the installer on my RnD machine, it asks to download DirectPlay, I click “yes” and somehow it finds it(not sure where did it search though-I clicked “yes” too quickly), and finish the installation after it DL the DirectPlay.

Both systems are Win10 Home 64 bit, the one for the bar is Celeron while my RnD is i7