{?something} is a notation to prompt for input, which is then passed to some other variable

[:something] can be a few things…

[:something] is a reference to a value held in a built-in Program Variable (read-only?), such as [:RemainingAmount] or [:NumberpadValue] (which is also held in {:NUMBERPAD}, though the value in {:NUMBERPAD} can be modified using Action Update Program Setting, if you put NUMBERPAD in the Setting Name field, and [:whichnumber] or a value in the Setting Value field).
There are many of these that can be read in different ways, for example… [:EntityName] for a Customer Entity Type is the same as {ENTITY NAME:Customer} (printer template tag), and within a Rule relating to an Entity, you’ll see in the Left side of Custom Constraints you can select Entity Name, which I believe is simply a friendly representation of [:EntityName].

Then we have expressions, such as [=something1+something2] or [=TN('{TICKET TOTAL}')] which is an expression containing a Function() that is operating on a {PrinterTag}.

I look forward to any additions, corrections or clarifications from the Gurus @emre and @JohnS!

4 Likes
Is there any documentation about parameters?
[New 4.1.42] Execute Automation Command Action
What's the difference between [:something] & [something] & {something:something2} & {something} , etc.?
Kitchen Display Setup
Help understanding Scripting in HTML Viewer Widget?
Handeling Half Pints
Switch between users
QMcKay July 24, 2014, 6:50pm #2 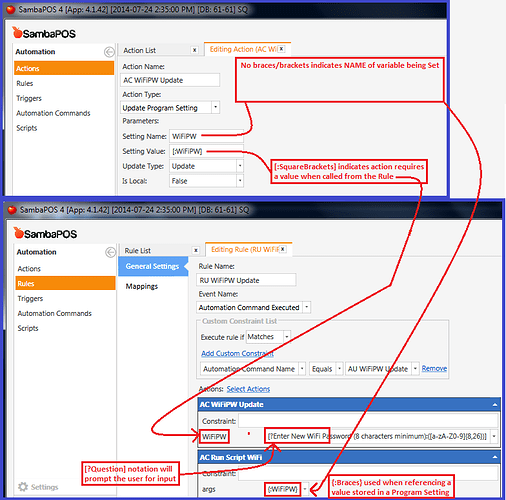 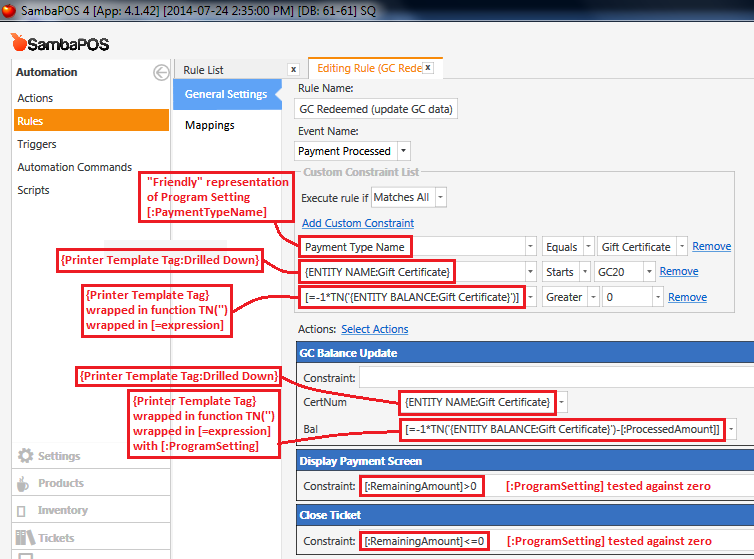 It really depends on the event that you capture in Rules. For example, the event Ticket Total Changed, or Payment Processed are 2 such events that will give you {TICKET TOTAL}.